Professor Walter Leal goes over plans for the Zika Public Awareness Symposium with two of his students, Hanni Newland (center) and Nepheli Aji. (Photo by Kathy Keatley Garvey)
The Zika virus is "scarier than we initially thought."

So screamed a recent USA Today headline in a quote attributed to the Centers for Disease Control and Prevention (CDC).

"Public health officials used their strongest language to date in warning about a Zika outbreak in the United States, as the Obama administration lobbied Congress for $1.9 billion to combat the mosquito-borne virus," the publication reported.

And now interest is spiking in the two-hour UC Davis "Zika Public Awareness Symposium," set Thursday, May 26 from 6:30 to 8:30 p.m. in Room 1001 of Giedt Hall and organized by coordinator Walter Leal, a chemical ecologist and professor in the UC Davis Department of Molecular and Cellular Biology, and 18 biochemistry students.

It's free and open to the public: to reserve space, RSVP to ucdstudentsagainstzikav@gmail.com.

The scientific-based symposium will include "expert panels and speakers throughout the United States and the world, including those working on the front lines of the Zika epidemic," Leal said.

Two Brazilian scientists who deal with patients and mosquito vectors at the epicenter of the Zika epidemic will speak (remote). Speakers also will include a scientist involved in the first documented case of sexual transmission of an insect-borne disease; specialists in dermatology, obstetrics and gynecology; and medical entomologists. Aedes aegypti, aka yellow fever mosquito, that can transmit the Zika virus. (CDC Photo)
The agenda:

At the symposium, attendees will "learn the symptoms and learn the facts and science about Zika and how you can protect yourself from this disease," said Leal, who collaborates with researchers in his native Brazil. He recently participated in the international Zika research symposium there.

"It is very important that students and the public-at-large learn how to prevent a possible Zika epidemic as this is the first virus known to be transmitted both sexually and by mosquitoes,"  Leal said. "We thought that we did not have the vector (the yellow mosquito), but now our research in collaboration with Brazilian scientists indicates that our local mosquitoes (Culex) are also competent vectors. And more and more we hear cases of travelers returning home infect with Zika virus. I am so glad that a group of 18 students who took my biochemistry class last quarter decided to launch this initiative to educate their peers and citizens of Davis about this dangerous virus."

Should we worry about the Zika virus? Yes, Leal says, for several reasons: "Zika is likely to become an epidemic in the United States; the virus is transmitted sexually and by infected mosquitoes; and, more importantly, Zika infection in pregnancy causes severe fetal brain development, and other medical problems."

Zika, discovered in 1947, was named after the Zika Forest in Uganda. The first known human case occurred in 1952. “Prior to 2015, Zika virus outbreaks occurred in areas of Africa, Southeast Asia, and the Pacific Islands,” according to the CDC. “In May 2015, the Pan American Health Organization (PAHO) issued an alert regarding the first confirmed Zika virus infection in Brazil. On February 1, 2016, the World Health Organization (WHO) declared Zika virus a Public Health Emergency of International Concern (PHEIC).” 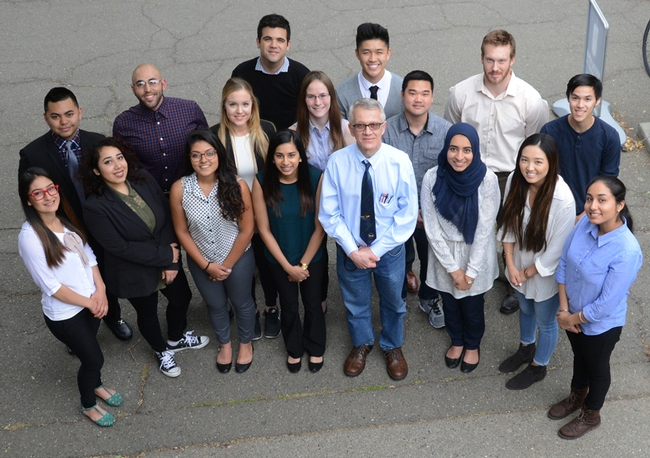 Planning the symposium are (front, from left) Esmeralda Curiel, Irene Orellano Bonilla, Nepheli Neeta Aji, Amarita Singh, Professor Walter Leal, Nida Ahmed, Leah Uto and Navjot Grewal. In the second row (from left) are John Tenorio, Mahmoud Jabaieh, Holly Vickery, Justin Hildebrand (back), Savannah Tobin, Christian Wirawan (back), Justin Hwang, James Warwick and Andre Tran. (Photo by Kathy Keatley Garvey)
Tags: Aedes aegypti (26), UC Davis (231), Walter Leal (86), Zika Public Awareness Symposiium (1), Zika virus (7)
Comments: 2
Comments:
by Tim Scetler
on May 12, 2016 at 3:18 AM
I just had a discussion in my class about Zika. There is low awareness nationally, but I think many who have a concentration in world disease, the knowledge is increasing.
by Cindy Chen
on May 26, 2016 at 6:12 PM
I would definitely want to learn more about the zika virus. I have heard about it but not sure what it really is about.
Leave a Reply: