Avocado Cultivars, Botanical Races and Genetic Footprints
Published on: May 24, 2016

Have you ever wondered where your favorite avocado variety came from? Not the nursery where it was purchased but the long, tortuous path that led to its selection. How are different varieties related? Did the expert tell you that your avocado is a “Guatemalan x Mexican” but you were afraid to ask what that means? Has your carefully nurtured seedling raised from a ‘Hass' pit morphed into a tree bearing unconvincing fruit? If so, read on.

Avocado breeders refer to the different types of avocado as varieties or, more correctly, as cultivars. The ‘Hass' cultivar is by far the best known, but several hundreds of named avocado cultivars have been bred in the USA alone since avocado was first introduced here. None was developed by the big commercial seed companies; Instead, avocados were patiently selected, originally by indigenous cultures of Mesoamerica, much later by growers/enthusiasts, and fairly recently in avocado breeding programs. Almost never do we know the precise pedigree of a cultivar. We are sometimes told the maternal parent, but older cultivars (including ‘Hass') typically lack a record of parentage, and any thought of fitting today's cultivars into a concise family tree is hopelessly optimistic. In any case, prior to the mid-19th century very little is known about the plant material that was imported from abroad, with at best an indication of geographic provenance. And yet it would be far more efficient if we could arrange cultivars in a hierarchy or a series of related assemblages, instead of just looking at a random scatter.

In order to understand how today's cultivars are related we need to dig deeper. Going back in time, we know that indigenous civilizations in Mesoamerica recognized the value of the avocado's wild ancestor(s) and were actively selecting superior forms for thousands of years, which eventually led to a semi-domesticated avocado. Evidence of selection by human hand as far back as 8,000 years before present is preserved in archaeological sites in Puebla State, Mexico. At the time of European contact, written records indicate that there already existed three distinct types of avocado, each from a separate geographic center of origin. Today, we refer to them as botanical races, and they represent the “primeval soup” that gave rise to modern avocado cultivars.

Here is what we know about the three botanical races of avocado, respectively called (1) the West Indian (formerly known also as the South American), (2) the Guatemalan, and (3) the Mexican (also known as the “criollo”): Each exhibits a characteristic suite of traits that includes differences in leaf chemistry, peel texture and color, and sources of tolerance (diseases and salinity). The races were domesticated in separate geographic regions, the “West Indian” race in lowland coastal Mesoamerica (possibly Yucatán), the Guatemalan race in upland Guatemala, and the Mexican race in highland Mexico. The Guatemalan and Mexican races remained fairly local, so their names reflect their respective centers of domestication, but the “West Indian” race seems to have been spread far and wide by indigenous cultures in Meso- and South America and was, incorrectly, named for a much later destination. The explorations of the 15th and 16th centuries kicked off the worldwide distribution of (mostly West Indian race) avocados, reaching Spain in the early 17th century, Jamaica in the mid-17th century, and Indonesia by the mid-18th century. It wasn't until the mid- to late 19th century that the three races of avocado found their way to the United States, primarily Florida and California.

After the avocado was introduced to California and elsewhere, there followed countless rounds of selection, generally resulting in hybrids among the botanical races. The selection process consisted of growing out seedlings from the seeds of “good” cultivars and screening them for chance seedlings with promising characteristics. However, in the same way that children are not identical to their parents, seedlings grown from the pit of a fruit are not identical to the tree the fruit came from. Each seedling represents a reshuffled version of its parents' genomes. The only procedure that preserves an identical genome is clonal propagation. Budding and grafting techniques that, today, ensure clonal propagation and keep cultivars “true to type” were not used until the first half of the 20th century.

Contrary to many major crops, most avocado cultivars we have today are bursting with so much genetic diversity that breeding is actually rendered difficult. When we grow out seedlings we get a huge number that look (and taste) nothing like their parents and most are discarded. The poor selection efficiency (an estimated 0.2%) has to do with the large variability caused by multiple domestication centers and a long history of open-pollination. There is no immediate danger of a genetic bottleneck, but breeding is slow and outcomes are unpredictable.

In the absence of accurate breeding pedigrees, we have come to describe avocado cultivars in terms of their resemblance to one or several botanical races, based on their combination of traits. For example, ‘Hass' is considered to be a Guatemalan x Mexican (G x M) hybrid because it has the thick, rough skin of the Guatemalan race but the high oil content of the Mexican race. Cultivar ‘Gwen' is also called a G x M hybrid, but is possibly a little more Guatemalan than Mexican and certainly more Guatemalan than ‘Hass'. Cultivar ‘Fuerte' is often called a G x M hybrid or sometimes Mexican which makes it more Mexican than ‘Hass' and a lot more Mexican than ‘Gwen' but not as Mexican as ‘Mexicola'... What these examples show is that description of avocado cultivars in terms of botanical race composition has its limitations and we are most likely dealing with a continuum of blending among the three botanical races. Can we improve on this? ¡Sí, se puede!

Enter the modern tools of genomics: molecular markers and new analytical approaches are emerging that can peek inside ancestral genomes and discover hidden patterns within genetic information. The new approaches track the progress of tiny nuggets of genetic information (markers) by comparing their distribution across a large numbers of cultivars. Several studies have revealed that today's cultivars continue to harbor the genetic footprints of the three botanical races and a lot more besides. In this instance, having cultivars bursting with genetic diversity is a good thing. Eventually, given a large enough dataset (markers and cultivars), we will be able to place cultivars into assemblages that go beyond first-pass assignments to one or more botanical races.

A working framework of cultivar assemblages confers predictive information that helps guide cultivar choice and breeding decisions. In a slow-growing tree crop such as avocado where years elapse before many traits are available, a marker-guided, predictive framework represents huge savings in time and resources. A simple example illustrates this point: In the event of an epidemic there is no time to start breeding new cultivars from scratch. Instead, the first line of defense is to explore tolerance present in existing cultivars, and having access to a framework helps prioritize among hundreds of cultivars. Avocados of Mexican ancestry are known to exhibit better disease tolerance than Guatemalan and West Indian stock, so material that contains a Mexican-race footprint would be a good choice for early screenings for tolerance. Epidemics such as grape phylloxera or potato blight are well known examples where the mainstream cultivars shared too uniform a genetic base and where a cultivar monoculture permitted disease pressure to attain dangerous proportions. Consequently, today's dominance of ‘Hass' should be viewed with some trepidation.

In fact, it is possible that we are facing a new epidemic right now: Fusarium dieback (FD) has impacted many tree species, especially the avocado, in southern California since its introduction in 2013. The Fusarium fungus is transmitted by a beetle, the polyphagous shot hole borer (PSHB), and fungus and beetle act in partnership to breach the defenses of their plant host, leading to wilting, branch dieback, and fruit losses. Moreover, we know that ‘Hass' is highly susceptible to the disease. It is time to look for sources of tolerance and to revisit the cultivars that have lost ground to ‘Hass', such as ‘Bacon', ‘Fuerte', and ‘Reed', and to take advantage of germplasm collections that contain material of older vintage, often dating back to the start of the 20th century, if not before. A major germplasm collection is maintained at the University of California South Coast Research & Extension Center in Irvine, and additional material is grown at UC Riverside's Agricultural Operations. A good digital resource to study the diversity of cultivars available in California is the UC Riverside Avocado Information website http://ucavo.ucr.edu/avocadovarieties/VarietyFrame.html.

Is the consumer ready to embrace new cultivars? Preliminary evidence is promising. There are few opportunities today to come face-to-fruit with the more unusual cultivars because they have largely been banished to back yards or live sheltered lives in today's germplasm collections. A notable exception is the UC Riverside avocado breeding program. Headed by Dr. Mary Lu Arpaia, the program runs a monthly avocado tasting session where participants record their views on visual (external) fruit characteristics and on fruit sensory qualities (flavor). These tasting sessions have shown that participants are drawn to novel fruit shapes/sizes and value the taste of many cultivars, not just of ‘Hass'. There is also considerable interest in learning more about existing cultivars and about the history of avocado breeding and domestication.

Clearly, to place avocado cultivars into a workable framework that reflects their interconnections as well as the footprint of the three botanical races will be a valuable addition to the tools available to breeders and will benefit our knowledge of avocado diversity. For now, however, we are unable to give concise answers to the questions of the introductory paragraph, but it is safe to say that your favorite cultivar is probably a hybrid between at least two botanical races of avocado, contains genetic footprints left by ancient Mesoamerican breeders, capriciously gives rise to highly promising seedlings, and has a murky pedigree yet to be laid bare. 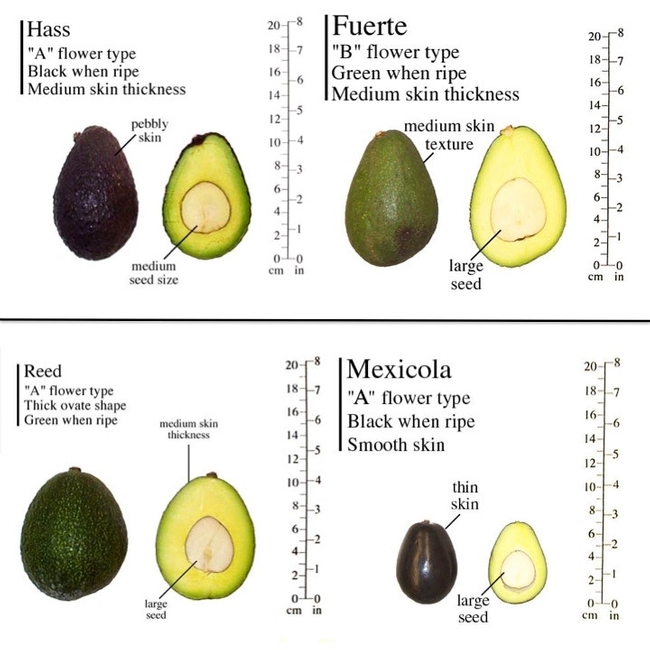