Ultra-short tail docking gets a withering glare
Published on: January 5, 2010

"This is purely a cosmetic procedure and does not advance the welfare of the animal," Stull was quoted. "We really want to focus on what is best for the animal's welfare. And we know that ultra-short tail docking is not."

Ultra-short tail docking means the tail is cut off where it connects to the animal's rump, not leaving the inch or two typically remaining after commercial tail docking. It is designed to give the animal a stronger, more muscular appearance. Veterinarians say it can cause rectal prolapse, but one sheep breeder told Bee reporter Robert Rodriguez that show judges like the look.

"Many of our 4-H members today purchase their lambs already docked, so we want them to know what to look for," the story quoted Steve Dasher, the 4-H Youth Development advisor in San Diego County. "Also, for those that raise their own lambs, we want them to implement those practices that are approved by the experts."

Jim Sullins, director of UC Cooperative Extension in Tulare County, said the 4-H program needs to do a better job of educating students and their families about the risks of ultra-short tail docking. But it will not be easy.

"This is a very competitive environment, and if a procedure is being rewarded by the judges, then that procedure is going to continue," Sullins was quoted.

Coincidentally, on Jan. 1 a new law went into effect that banned docking dairy cow tails. The law, which was initially mocked by Gov. Schwarzenegger last year when lawmakers were struggling to balance the state budget, makes California the first state to ban what the Associated Press called a "painful practice." The dairy industry was not in favor of the law's passage, contending that cutting off cow tails to prevent them from slinging manure was already uncommon.

Last year, the UCCE dairy farm advisor for Tulare County, Noelia Silva-del-Río, surveyed San Joaquin and Sacramento valley dairies to document the prevalence of cow tail docking. She reported in her October 2009 California Dairy Newsletter that 286,949 cows - 7.4 percent of cows in the survey - had docked tails. 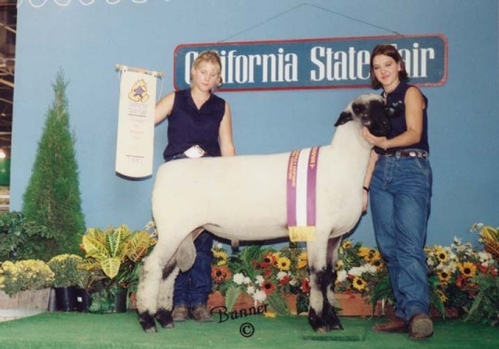