The Sacramento Bee picked up on a UC news release about the most recent issue of California Agriculture journal, which said more than 1 million California farmworkers face a higher risk of diabetes and respiratory disease because of poor air quality.

The news release says California's Central Valley has the highest recorded levels of particulate matter in the country. The polluted air results in increased rates of asthma and other respiratory illnesses. In addition, the release said research points to possible environmental links between pesticide exposure and the risk of diabetes.

In a sample of 1,300 Mexican Americans who participated in the Hispanic Health and Nutrition Examination Survey, conducted from 1982 to 1984, higher levels of organochlorine compounds, which are found in pesticides, were observed in the blood of adults with self-reported diabetes compared to those without diabetes, according to the Cal Ag article.

"However, due to the cross-sectional design of the study, it is not clear whether there is a causal relationship between pesticide exposure and diabetes, or what the nature of that relationship may be," according to the article. 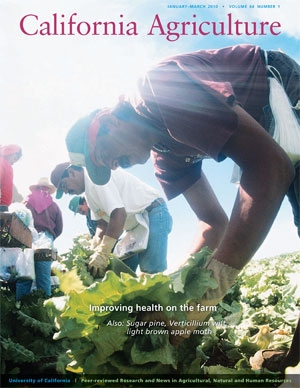