Introduction:  An August 2009 field trial demonstrated the efficacy of  malathion and zeta-cypermethrin (Mustang) against the spotted winged drosophila (SWD), Drosophila suzukii in raspberries.  The following summary reports efficacy of additional materials trialed against SWD in December 2009.

Products were applied on December 3, 2009 with a Maruyama 056 gas powered back pack sprayer at maximum labeled rates in 179 gallons water per acre and 150 psi.  Each plot was 1,173 sq ft of a proprietary raspberry variety under polyethylene-covered tunnels.

Pre- and post-treatment estimations of SWD were made with a D-Vac Model 122 (hand carry) gas-powered insect sampling device operated at an airflow capacity of 280 cu ft per minute per square foot at the opening of the collecting head.  Each side of a 36-ft section of 4-ft high hedge row was sampled.  Collected samples were transferred from the D-Vac into Ziploc bags for transport back to the lab where they were frozen for approximately an hour prior to counting.

Because male SWD (easily distinguished by the black spot on their forewings) comprised over half the total Drosophila captured in most samples, we assumed the remaining fraction of Drosophila to be female SWD (which do not have spotted wings).  However, since the species of the females was not confirmed, they will be given in results as "females". Results are reported as total (male + female) SWD.

In order to evaluate the impact of treatments on incidence of fruit infestation by larval SWD, thirty marketable fruit were collected from the center of each treatment replicate prior to treatment and then 7-, 14-, 21- and 28-days post-application.  Fruit samples were placed in 4x6x12-inch plastic bags fixed with a 1x ¾-inch PVC screened vent tube sealing the open ended of the rearing bag (see photo below).  After two weeks, the numbers of larvae, pupae and adults were enumerated.

Conclusion: This study demonstrates that Delegate is as effective as malathion in controlling SWD at relatively low population levels as those encountered during December 2009.

We are very grateful for the cooperation of Dutra Farms and Chris Hogan for providing the test site. 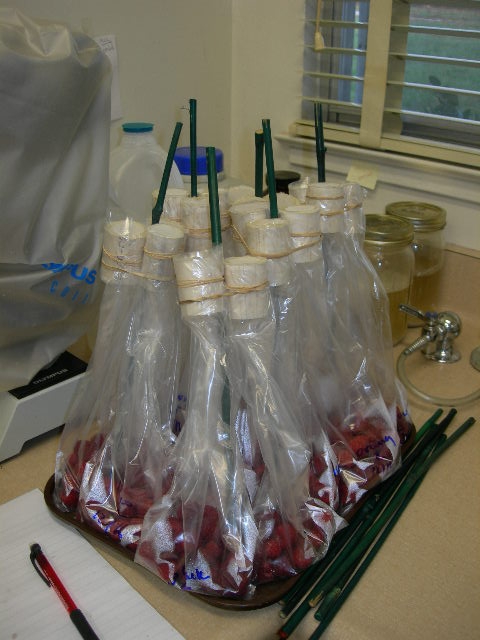 Fruit infestation study
30 raspberry fruit are collected into each plastic bag to incubate out SWD. Note the vented tube at the top of each bag to provide air exchange. Green sticks are to keep bags upright.
Tags: Delegate (1), Drosophila suzukii (4), fruit infestation (1), spotted wing drosophila (15)
Comments: 2
Comments:
by Mark Shimozaki
on February 10, 2010 at 7:38 AM
Mark was there any feeding attractants used in this study. What form of Malathion was used 8 or 5 ?
by Mark Bolda
on February 10, 2010 at 8:00 AM
Mark,

The malathion formulation was Aquamul 8. No feeding attractants were used in the study- I am not clear either to which materials you are referring. Remember that one of the suggested adjuvants, Nulure, which has not yet been tried here, is a feeding STIMULANT, meaning the flies are not drawn to it as with a bait, rather they feed on the material once they land on it.
Leave a Reply: