The collapsed feral honey bee colony arrives at the Bohart Museum of Entomology and is now being prepared for display. (Photo by Kathy Keatley Garvey)
The architectural structure of a collapsed feral honey bee colony in a hollowed-out Eucalyptus tree in a secluded area near the Nut Tree Airport, Vacaville, now has a permanent home: the Bohart Museum of Entomology at the University of California, Davis.

The colony, sheltered from the elements and located in an unpopulated area, buzzed with activity in June but collapsed in late September.

“We're really glad to get this and it will be a wonderful educational opportunity,” said Lynn Kimsey, director of the Bohart Museum and professor of entomology at UC Davis. “Not many people have seen a feral honey bee colony and we haven't seen one as nice as this. Many thanks to the folks who saved it so carefully for us.”

It all came about as the result of Karen Cometta Shepard of Vacaville walking her dogs in the area. On one spring walk, her friend's eight-year-old daughter, Madison Marshall, noticed something unusual. “What are those stripes in the tree?” she asked.

The stripes were a feral honey bee colony.

Shepard posted a photo on a community Facebook page but kept the location a secret to avoid disturbances. Some readers clamored for the bees to be destroyed. Some worried they were Africanized. Some wanted the honey. Shepard shared the location in late June with Bug Squad. (See photos of the then viable colony.) A honey bee gathers honey from the comb. (Photo by Kathy Keatley Garvey)
“Luckily the hive is so hard to see and protected,” Shepard said. “I've walked by that area twice a week with my dog for the last five years and if it weren't for my little friend, Madison, I probably would never have seen it.”

The colony successfully escaped public view and predation. Last June Extension apiculturist emeritus Eric Mussen of the UC Davis Department of Entomology and Nematology weighed in on the find and said the colony was a good thing; “the bees are out pollinating our fruits and vegetables” and it's in unpopulated area and “not bothering anyone, “ he pointed out.

In September, however, bees began abandoning the hive, and by early October, the colony was no more.  One speculation: varroa mite infestation and the bees left to find a better home?  (A basketball-sized swarm appeared on a nearby tree and another swarm temporarily located near a residence several miles away.)

The Eucalyptus tree, on Solano County land, was one of the dead, dying and hazardous trees removed through a county contract with Atlas Tree and Landscape, Santa Rosa. The removal began in mid-September, according to Robert Arndt, building trades mechanic at the Nut Tree Airport, and new trees will be planted. The intricate hexagonal cells, an architectural wonder. (Photo by Kathy Keatley Garvey)
Solano County Board of Supervisor John Vasquez of Vacaville said he's glad that the wild bee structure is being used for educational purposes and “is an opportunity for the public to see what one looks like.”

Through arrangements with Arndt and project leader Jose Garcia of the Atlas Tree and Landscape, the section containing the comb of the collapsed feral colony was cut and saved Oct. 4. It was then trucked to the Bohart Museum where it is being prepared for display. Thousands of visitors are expected to see it.

The feral bee colony produced some five feet of honey comb in the hollowed-out tree. “That could have been for one season,” Mussen said. The average honey bee colony in California yields about 60 to 100 pounds of honey per season. Many beekeepers remove 60 pounds and allow 30 pounds to carry over through the winter.

The Bohart, open to the public Monday through Thursday, from 9 a.m. to noon and from 1 to 5 p.m., in Room 1124 of the Academic Surge Building on Crocker Lane, is the home of nearly eight million insect specimens. Admission is free. The Bohart Museum hosts special open houses on specific weekends, which are free and open to the public. See schedule. 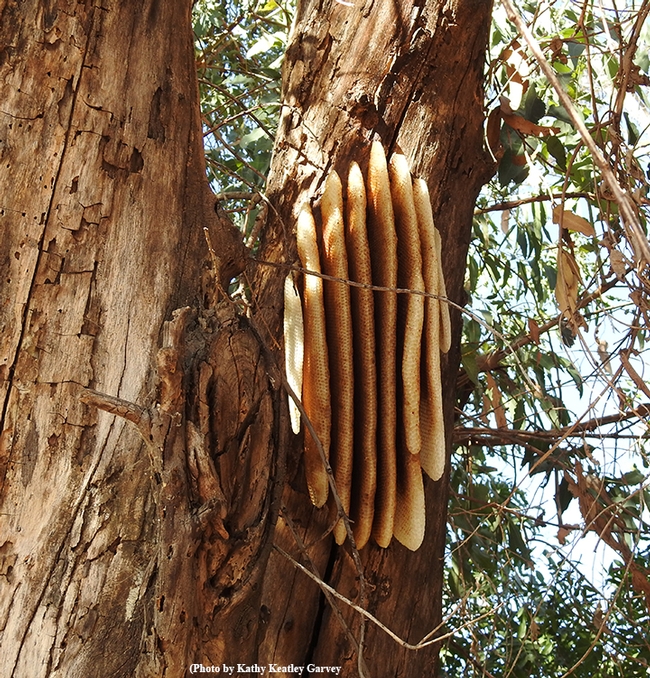 The collapsed feral honey bee colony as it looked on Oct. 4 before it was cut and removed. (Photo by Kathy Keatley Garvey) 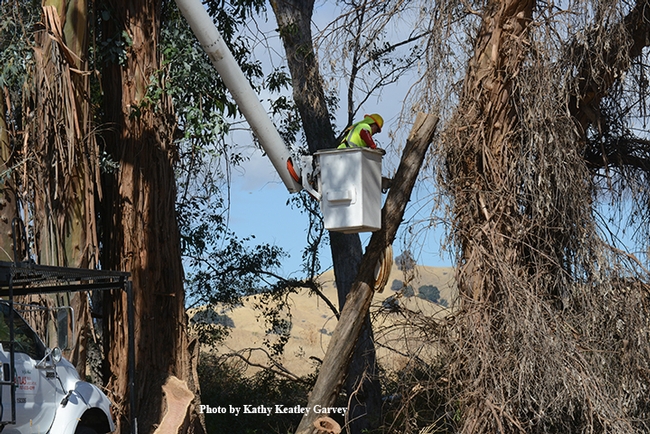 Jose Garcia of the Atlas Tree and Landscape Company prepares to save the collapsed colony for display in the Bohart Museum of Entomology. (Photo by Kathy Keatley Garvey) 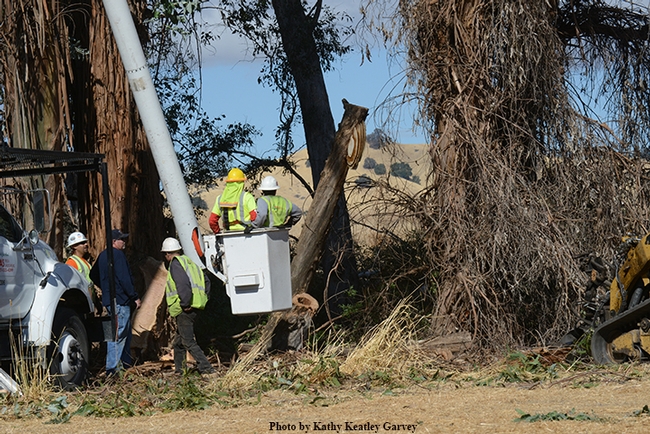 With part of the tree cut, the feral honey bee colony is ready to be saved. (Photo by Kathy Keatley Garvey) 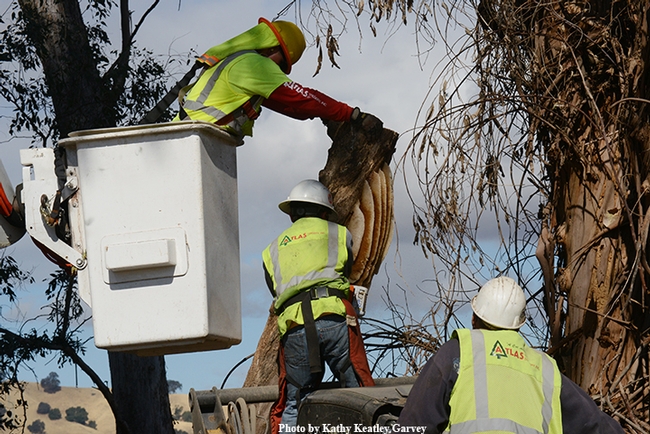 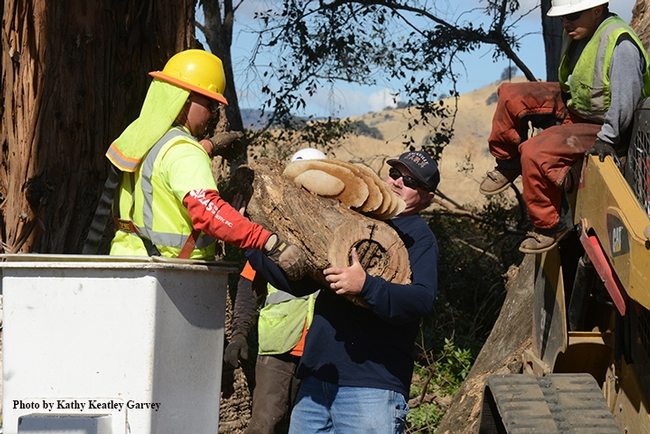 Robert Arndt of the Nut Tree Airport hefts the tree section from Jose Garcia of the Atlas Tree and Landscape Co. (Photo by Kathy Keatley Garvey) 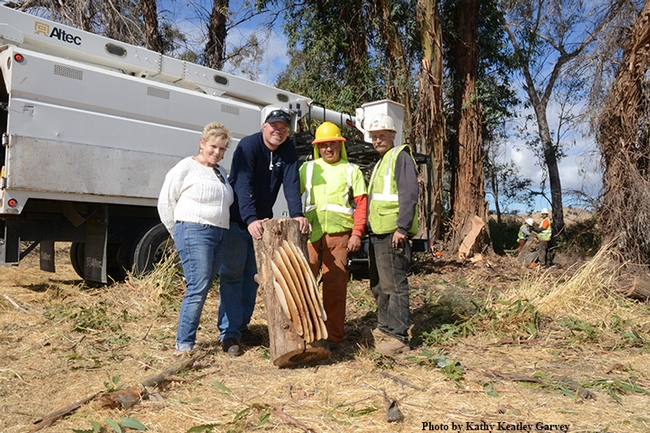 Showcasing the collapsed feral honey bee colony are (from left) Karen Cometta Shepard of Vacaville; Robert Arndt of the Nut Tree Airport; and Jose Garcia and Dennis Stark of the Atlas Tree and Landscape Company. (Photo by Kathy Keatley Garvey) 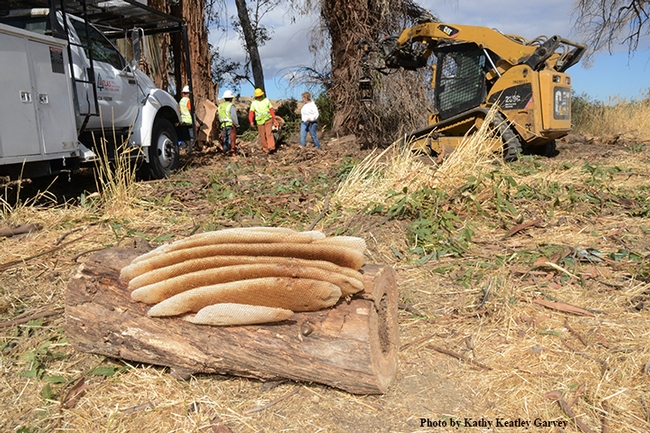 With the collapsed feral honey bee colony in the foreground, the crew salvages the honey. (Photo by Kathy Keatley Garvey) 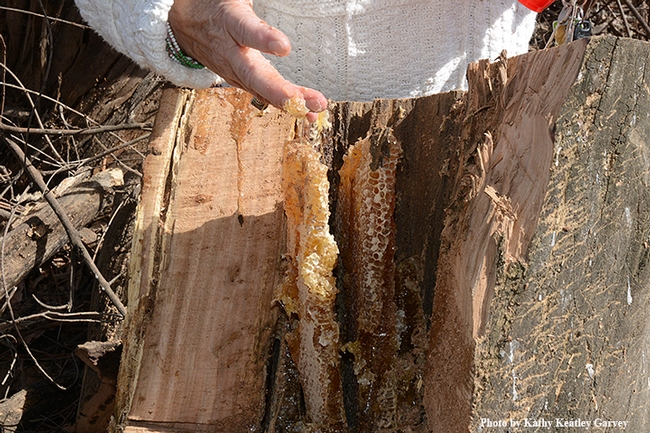 A taste of honey: Honey comb in the hollow of the tree. (Photo by Kathy Keatley Garvey)
Tags: Atlas Tree and Landscape (1), feral honey bee colony (4), John Vasquez Jr. (2), Nut Tree Airport (1), Solano County Board of Supervisors (1)
Comments: 4
Comments:
by Gayna Lamb-Bang
on October 18, 2016 at 7:56 AM
Why is this colony considered "feral"?
by Kathy Keatley Garvey
on October 18, 2016 at 10:37 AM
It's considered "feral" because it's not managed by humans (beekeepers). This kind of colony is known as a "feral" or "wild bee" colony or "out in the wild."
by Win Rogers
on October 18, 2016 at 10:47 AM
Cool story and cool pictures of a cool group.
by Kathy Klobas
on October 19, 2016 at 6:30 PM
Kathy, in mid-September a swarm of bees passed through my yard and stayed on an umbrella pole for about an hour. I live near North Orchard Avenue in Vacaville. Could these be from this colony? A beekeeper told me that it was an unusual time for bees to swarm.
Leave a Reply: