The conference, themed "Entomology Without Borders," drew 6,682 delegates from 102 countries. The last time ICE met in the United States was four decades ago. The venue then: Washington, D.C.

One of the symposia at the Orlando meeting was the Zika Symposium, "which covered multiple aspects of the Zika epidemic, including epidemiology, sexual transmission, genetic tools for reducing transmission, and particularly vector competence," Leal wrote. "While there was a consensus among participants that the yellow fever mosquito, Aedes aegypti, is a vector of the Zika virus, there is growing evidence indicating that the range of mosquito vectors might be wider than anticipated. In particular, three independent groups from Canada, China, and Brazil presented and discussed laboratory and field data strongly suggesting that the southern house mosquito, Culex quinquefasciatus, also known as the common mosquito, is highly likely to be a vector in certain environments."

Leal based his opinion piece mainly on the current literature and the Zika Symposium at ICE 2016, which was organized by Constância Ayres, Oswaldo Cruz Foundation (FIOCRUZ-PE), Recife, Brazil (he collaborates with Ayres) and Adriana Costero, National Institutes of Health, Bethesda, Md. The speakers included worldwide experts from the United States, Brazil, China and Canada.

Ironically, the Zika virus wasn't a household word  or in most entomologists' vocabulary when Leal and Simmons began planning the ICE 2016 meeting several years ago.

Now scores of researchers are tackling the Zika virus (ZIKV), first isolated first from a febrile monkey and later from the mosquito Aedes africanus. "ZIKV was isolated from humans for the first time in 1954 during an outbreak of jaundice suspected of being yellow fever," Leal recounted.

"During the discussion at the end of the symposium, the forum was opened for questions and comments," Leal wrote. Scott Ritchie of James Cook University, Australia, asked “Is anyone looking for the virus in birds?”

"This question captures the sentiment that both questions were thought provoking, and we still do not have all or many answers when it comes to ZIKV. Hopefully, we will be better prepared when convening in Finland for ICE 2020. Wouldn't it be wonderful to report in Helsinki that mosquito vector populations have been reduced or eliminated, the Zika and other epidemics were contained, vaccines have been made available, and entomologists are ready to further improve the human condition by tackling other problems than the Zika epidemic?" 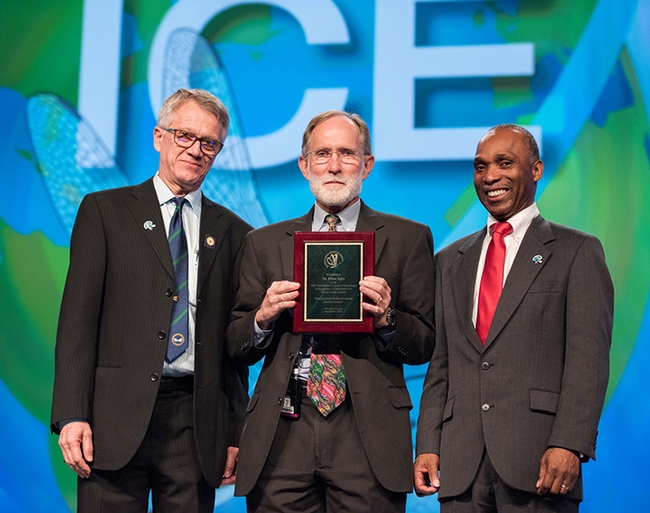 Nobel Laureate Peter Agre (center), a keynote speaker at ICE 2016, is flanked by the ICE 2016 co-chairs, Walter Leal (left) of UC Davis, and Alvin Simmons of the USDA/ARS, based in Charleston, S.C. 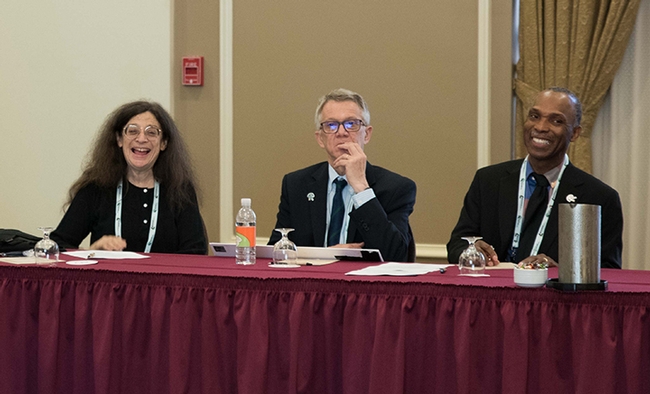