Mark Hoddle, UC Cooperative Extension specialist based at UC Riverside, has been monitoring the pest south of the border and recently visited Tijuana to assess the infestation.

"We found about 130 dead Canary Island palms," Hoddle said. "It's been devastating in Tijuana."

On the way back to Riverside, he stopped in Chula Vista, where he noticed dead palm trees.

“I thought, ‘What the heck?' and yeah, it was there, too,” he said. “It was basically an accidental discovery.”

Hoddle recently reported in California Agriculture journal on the successful eradication of a different invasive beetle attacking palm trees in Laguna Beach, the red palm weevil. The cost of the eradication was more than $1 million.

In the Press Enterprise article it said the South American palm weevil is susceptible to insecticides and pheromone traps. If the beetle's presence in a palm is determined quickly, the tree can be saved.

Hoddle said he is concerned about the scope of the South American palm weevil infestation in Southern California.

"My personal feeling is we might be on the verge of a crisis now," Hoddle said in a press release issued by UC Riverside. "The big problem is we don't know how far the weevil has spread. We really need help from the public in tracking its spread."

Hoddle and other experts spoke at a symposium about the weevil at Sweetwater Regional County Park in Bonita, California.

For more about this topic, read this article from the August issue of the UC IPM Green Bulletin. 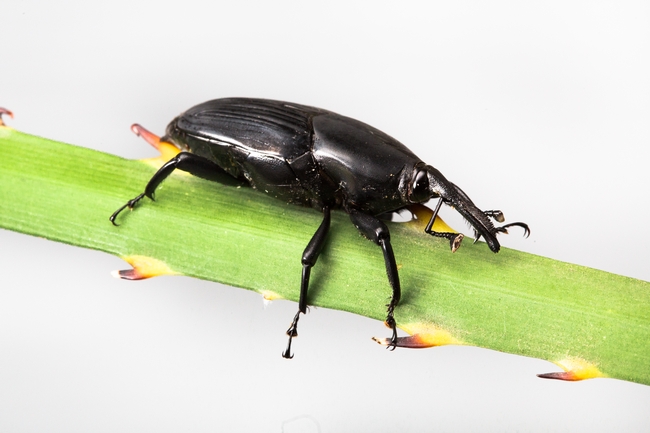