We just received word that noted ecologist Richard “Rick” Karban, professor in the UC Davis Department of Entomology and Nematology, has been named a fellow of the Ecological Society of America (ESA) for “his innovative contributions to community and evolutionary ecology, especially through providing conceptual advances and rigorous experimental work on plant-insect interactions."

Karban authored the 240-page book, Plant Sensing and Communication (University of Chicago Press), considered a landmark in its field.

ESA, in announcing its list of 27 fellows today (Feb. 6), said that its fellowship program recognizes the many ways in which its members contribute to ecological research and discovery, communication, education and pedagogy, and management and policy. Woolly bear caterpilar at Bodega (Photo by Kathy Keatley Garvey)
Karban has researched plant communication in sagebrush (Artemisia tridentata) on the east side of the Sierra since 1995. His groundbreaking research on plant communication among kin, published in February 2013 in the Proceedings of the Royal Society B: Biological Sciences, drew global attention. In that study, Karban and his co-researchers found that kin have distinct advantages when it comes to plant communication, just as “the ability of many animals to recognize kin has allowed them to evolve diverse cooperative behaviors.”

The gist of it: if you're a sagebrush and a predator (such as a grasshopper) is eating your nearby kin, another sagebrush,  it's good to be closely related. Through volatile (chemical) cues, your kin will inform you of the danger so you can adjust your defenses. Yes, plants can communicate

Karban was featured in a December 2013 edition of The New Yorker in Michael Pollan's piece, “The Intelligent Plant: Scientists Debate a New Way of Understanding Plants."

Karban and his graduate student, Eric Lopresti, also drew widespread interest when they announced that their woolly bear caterpillars can predict whether a Republican or Democrat will be elected to the White House.  When the population of woolly bear caterpillars (Ranchman's Tiger Moth, Platyprepia virginalis) at their research site at the Bodega Marine Reserve thrives, a Democrat heads to the White House, they said. When the population dives (as it did this year), a Republican occupies the oval office.  (See Bug Squad blog).

And why not? “Paul the Octopus had a pretty good run predicting soccer matches in 2012, so perhaps the woolly bears have earned as much credibility at forecasting this presidential election,” Karban related. Who says scientists don't have fun?

Highly honored by his peers, Karban is a fellow of the American Association for the Advancement of Science (AAAS) and recipient of the 1990 George Mercer Award from ESA for outstanding research. He was named an outstanding professor, ecology, at UC Davis in 1986.  He has published three books and more than 100 journal articles.

Karban received his bachelor's degree in environmental studies from Haverford (Penn.) College in 1977 and his doctorate in biology from the University of Pennsylvania, Philadelphia, in 1982. He joined the UC Davis faculty in May 1982 as an assistant professor, advancing to associate professor in 1988 and to full professor in 1994.

Overall, it was a great day today for UC Davis ecologists. Also selected fellows were:

The 10,000-member Ecological Society of America, founded in 1915, is the world's largest community of professional ecologists. They're committed to advancing the understanding of life on Earth, and some 4000 attend the Annual Meeting, featuring the most recent advances in ecological science. The Society publishes five journals and a membership bulletin and broadly shares ecological information through policy, media outreach, and education initiatives. 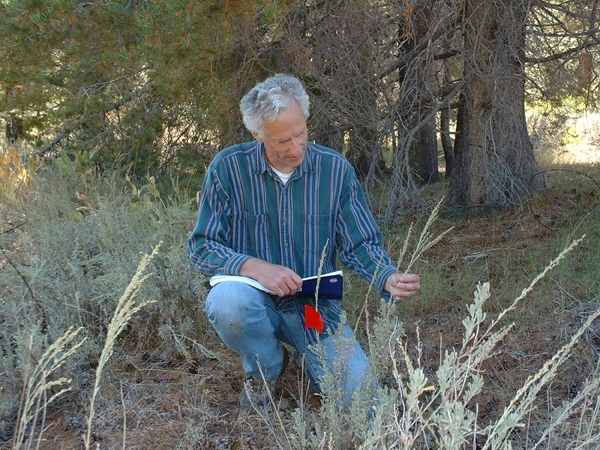 Karban has researched plant communication in sagebrush (Artemisia tridentata) on the east side of the Sierra since 1995.
Tags: Ecological Society of America (1), plant communication (5), Rick Karban (14), UC Davis Department of Entomology and Nematology (581)
Comments: 0
No Comments Posted.
Leave a Reply: