Lupines Are Blooming
Published on: February 21, 2017

I just caught sight of my first lupine for this spring. It barely stood out from all the tall grasses shooting up around it.  But there it was with its palmate leaves, hairy pods and of course, the beautiful purple flower spikes. Lupine is one of my favorite springtime wildflowers.

About three hundred types of this pea-type plant exist throughout the world. They are considered native to the Western and the Southern United States, Canada, Mediterranean countries and Africa but have now naturalized throughout most of our country and Europe.

Texans recognize it by the name “Bluebonnets”, a name given to them because they resemble hoods or bonnets.  Wild lupines are usually purple, while cultivated lupines can produce white, yellow, pink, red and blue flowers.  Plants can be anywhere from 1 foot to 5 feet tall, and blooms can last up to 4 weeks.  They are biennial or perennial.

If you choose to have them in your garden, you will most likely need to grow them from seed.  They do not transplant well due to the fragility of their long taproots.  They like sunny spots with well-draining soil. In the wild, you can usually find them where the soil has been disturbed, say by road construction or grazing.  Lupine seeds will germinate better with scarification.  Nick the seeds with a knife or use sandpaper to scrape a small area of the seed.  Alternatively, the seeds can be soaked in 180-degree water to break dormancy.  Nature takes care of scarification by the sandy or gritty or gravelly areas that these plants are usually found.  If planted in the summer and given irrigation, lupine will produce blooms and seeds the following spring.  If planted in the fall, whether or not given irrigation, blooms and seeds often won't appear until the second year.

Lupine is a food source for hummingbirds, bumblebees, beneficial insects and butterflies providing pollen and nectar.  Endangered Karner blue butterflies rely on wild blue lupine for its leaves which are the sole food for their caterpillars. Deer also will eat the leaves.  The seeds are consumed by birds and small mammals.  The plant provides cover for rabbits and birds.

Lupinus densiflorus var. aureus 'Ed Gedling' is the official flower for the city of Davis.  It can be found in the springtime near the Interstate 80 entrance to the UC Davis campus.  It has golden yellow blooms and is drought-tolerant.  It is also a California native plant and pairs beautifully with California poppies, ceanothus and wild lupine.

The name “lupine” comes from the word lupinus which refers to wolves.  It was originally thought that the plant scarfed down all the nutrients from the soil where it was growing. Lupines do like to grow in poor soil, but they definitely don't make the soil any worse than it already was.  Later on this springtime beauty was absolved of blame, when it was discovered that, like most pea-type plants, lupines actually give nitrogen back to the soil. 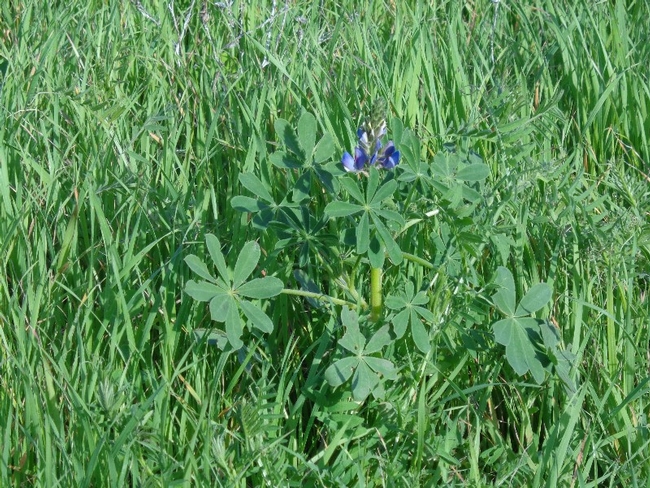 Lupine hiding in the grass. (photos by Michelle Davis) 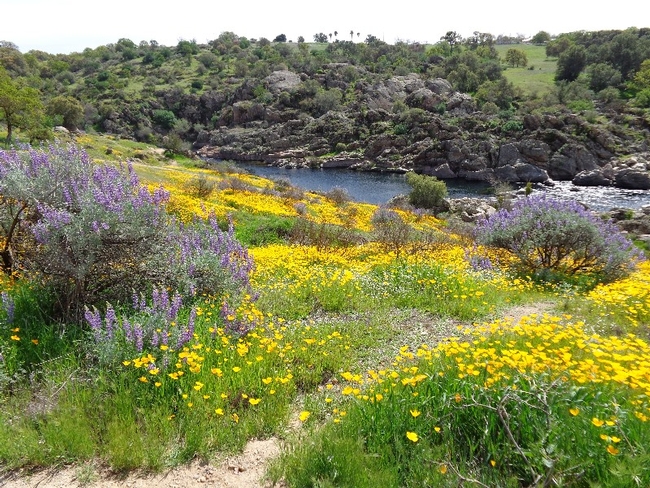