What Are Those Avocado Flowers Doing and What is Doing it to Them?
Published on: April 7, 2017

The avocado is an odd duck in many ways and notably in its flowering.  It has a complete flower, meaning it has both male and female parts in the same flower.  Some plants have separate male and female flowers on the same plant and other species have male plants and female plants.  The avocado, though acts – or is supposed to act – as if it had different stage flowers at different times.  It opens as a female (stamens up), then closes and the same flower then opens as a male (stamens splayed out).  They open separately in time, so, in theory, they cannot pollinate themselves – transfer pollen from the stamen (male part) to the pistil (female part).  Fertilization occurs when the pollen tube grows down the stigma to the ovule and initiates a fruit – avocado sex.  This is called synchronous (in a time sequence) dichogamy (split marriage). This is further complicated by having A and B flower types, where there are different lengths of time that the sexual stages are in flower.  You can read more about it here:

The problem is that the avocado hasn't read the text book about how it is supposed to flower and who or what transfers the pollen between the male and female stages.  The flower can often open as a female and be that way for days and there won't be a single male flower around, or be in a male stage for days and no female.  Or sometimes you find some females open and some males and sometimes that follow a time sequence where female may be open in one part of the day and males at another.  If the varieties near each other are complementary (pollinizers), some having more females than male flowers and the other tree having more male flowers than females, there can be transfer of the pollen……. if the pollinator is around – a honeybee, native bee, hover fly, fly, wasp, thrips a myriad of potential agents.  And if the weather right, and pollen is transferred to the female stage, it's possible there might be fertilization and fruit set.

So, the avocado is in full bloom through much of the avocado growing areas of California.  And if you look out at the hives placed in the orchard you may not see any honeybees on the trees.  Is that because they aren't flying?  The weather is too cool?  Because the flowers are in a male stage and they don't want pollen as a source of protein?  Is there some other more attractive flower in the area? Do they no like the avocado nectar with its high sucrose and perseitol content?

What is going on?  That is my question to you, dear readers?  What are you seeing in your orchards? What insects are on the avocado flowers?  What temperatures and time of the day are they flying?  In what stage are the flowers, male or female? Are you seeing fruit set?

And while you are at it, what birds are you seeing in the orchard?  How many different species?  Typically there are hummingbirds nesting in avocados this time of year.

Go ahead and make your comments on line here. 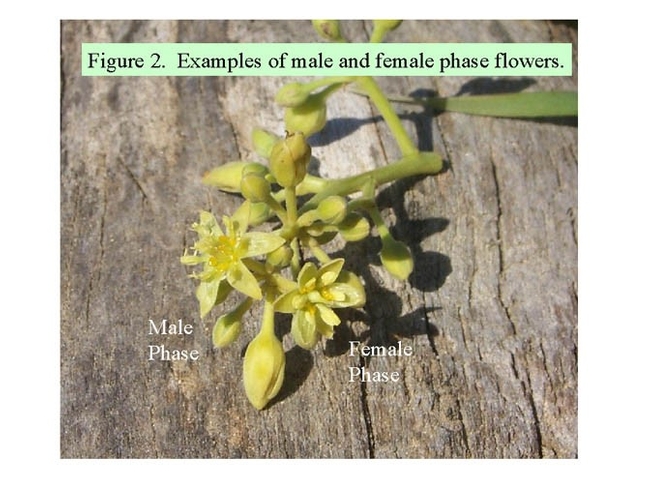