Adult hoplia beetle and feeding damage. [J.K.Clark]
If you grow roses, you might be noticing damage on the flowers caused by hoplia beetles (Hoplia callipyge). Hoplia beetles, which are common between March and May, especially in the Central Valley, feed on the blossoms of light-colored roses and other flowers in your landscape.

Hoplia beetle adults are small, reddish-brown scarab beetles that are often found resting inside a blossom. If you hold one in your hand, you'll notice that most of the body is a beautiful, iridescent silvery green color in the sunlight.

These beetles may also occasionally be found feeding on other plants with light-colored petals.

Some people believe they have the rose chafer or Japanese beetle in their landscape, however neither of these pests have populations in California. 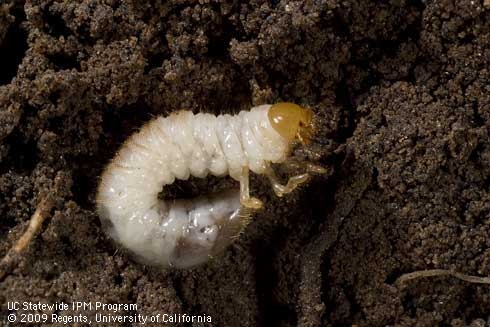