A huge financial loss: this is an example of the damage a bear can do in the bee yard.(Photo courtesy of Jackie Park-Burris, Palo Cedro)
Yes, bears raid honey bee colonies.

But it's primarily for the bee brood, not the honey.

The brood provides the protein, and the honey, the  carbohydrates. For beekeepers and commercial queen bee breeders, this can wreak havoc. Financial havoc.

The American Beekeeping Federation, headed by Gene Brandi of Los Gatos, recently asked Extension apiculturist emeritus Eric Mussen of the UC Davis Department of Entomology and Nematology to respond to a question about bees and bears.

Mussen, who retired in 2014 after 38 years of service (but he still remains active from his office in Briggs Hall), is from Minnesota, where the bears are and he isn't. He's managed to photograph a few bears, though, on family outings to Lake Tahoe.

We thought we'd share his response about bees and bears. Jackie Park-Burris of Palo Cedro, who owns Jackie Park-Burris Queens, kindly let us post some of her photos so our readers can see what bear damage looks like.  A past president of the California State Apiary Board and the California State Beekeepers' Association, she's a member of the noted Homer Park beekeeping family and has been involved with bees all of her life. She's been breeding Park Italian queens since 1994.

But back to Eric Mussen, the bee guru who has answered tons of questions during his 38-year academic career and who's now serving his sixth term as president of the Western Apicultural Society. (The society, founded in Davis, will gather \Sept. 5-8 in Davis for its 40th annual meeting, returning to its roots.)

"Bears eat both meat and plants (berries) etc. whenever they can find them," Mussen says. "Most people think that a bear has a sweet tooth, since it is attracted to beehives. While it is true that bears will eat some honey if it gains access to a hive, a closer look shows that it will eat all of what we call 'brood' first, and then eats a little honey."

Eric Mussen
Mussen describes bee brood "as made up of bee eggs, larvae, and pupae."  Since the queen may be laying between 1000 and 2000 eggs a day, "quite a bit of brood can accumulate before the end of the 21-day period that it takes to complete development from egg to adult female worker bee (24 days for the drones)."

"Bears have a pretty good sense of smell, so they can smell a beehive if they get downwind of a nearby colony," Mussen points out. "If the colony is living in a tree, often the bear literally tears the tree apart to get to the bees.  Unfortunately, they will claw and dig into a man-made beehive, as well.  They leave the covers scattered all over; the hive boxes scattered and often broken; the combs pulled out, broken, and strewn about in the apiary; and the combs that had brood in them will have the comb eaten out.  The colony will not survive and there may be very little undamaged equipment to salvage."

"To a small-scale beekeeper," Mussen says, "the financial loss is not too severe.  However, losing the colony, that requires so much effort to keep healthy these days, is quite a blow.  For commercial operators, who may not revisit the apiary for a couple weeks, it can mean a very substantial economic loss."

"The correct type of well-maintained bear fence usually is very effective at keeping bears away from the hives.  However, that holds true only for situations in which the bear has not had previous positive experiences ripping apart man-made beehives.  In that case, the bear expects a substantial reward for barging through the stinging fence and getting into the hives."

What to do? "Most beekeepers have no desire to kill bears, but they do desire to keep their colonies alive," Mussen says. "Often, attempts are made to capture the offending bear, tag it, and move it away far enough that it should not return.  Some of the wildlife specialists marvel in how far away a bear can be taken away and still return. Bears that cannot stay away from apiaries, or away from people's houses, or away from trash containers, etc., sometimes have to be eliminated.  It is best to have this done by agency personnel, but sometimes in remote areas the beekeepers get deprivation permits and kill the bear themselves.  In Northern California, the beekeeper has to notify the wildlife people of the kill, and the carcass has to be inspected to be certain that specific, black market body parts have not been removed from the bear.  The carcass then is buried in a landfill, or once in a while used in institutional food."

Occasionally Bug Squad hears of bears raiding honey bee hives in rural Solano County. We remember a story about a beekeeper/queen breeder in Mix Canyon, Vacaville, who was losing his hives to a "wild animal." The loss? Reportedly about $30,000. He set up a stealth camera and....photographed a 300-pound black bear.

"Bears have a pretty good sense of smell," as Mussen says, and the result can be "a very substantial economic loss." 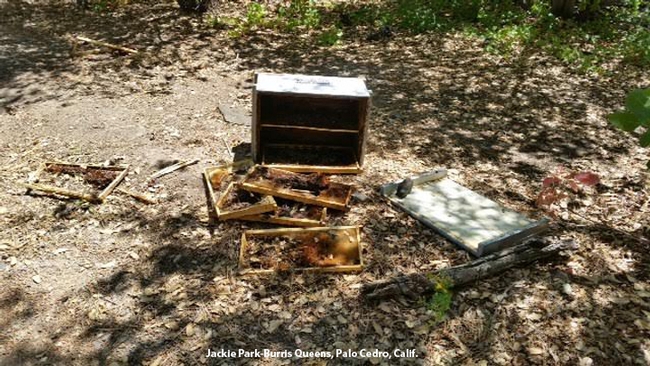 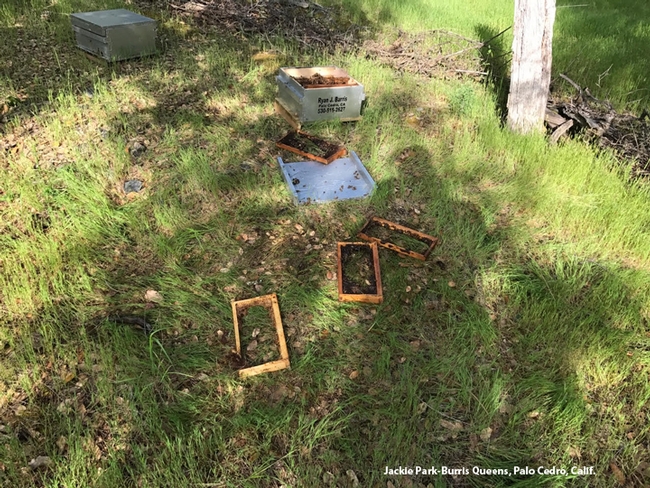 A bear scattered frames all over this bee yard as it went for the brood, and then the honey. (Photo courtesy of Jackie Park-Burris, Palo Cedro) 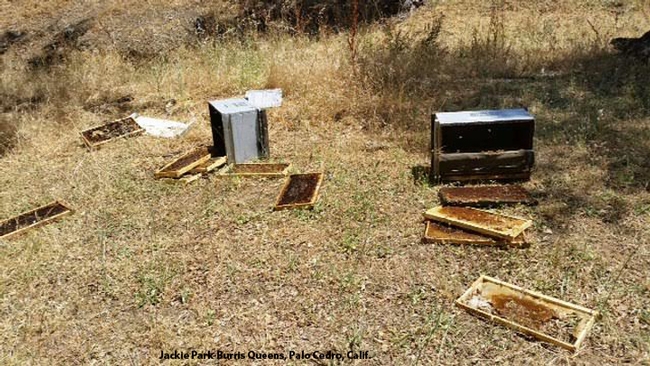 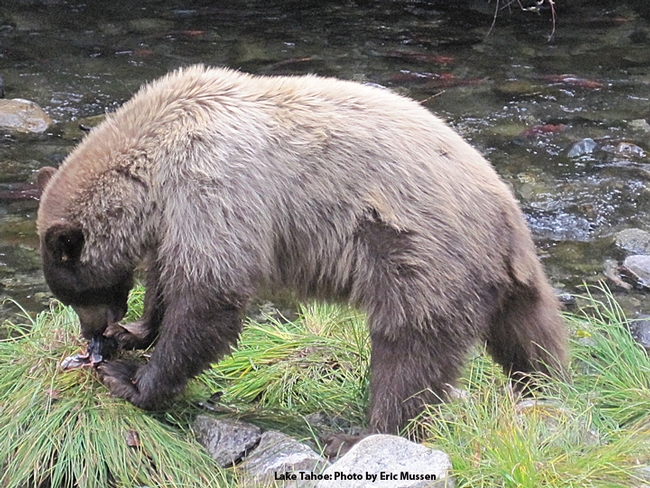