Bug Squad
sitenum=63
Happenings in the insect world
Have You Seen Me? Can You Identify Me?

Have you seen me? Can you identify me?

No, you're a skipper, but which one are you?

The colorful brown skipper butterfly that touched down on our Jupiter's Beard in Vacaville, Calif., on May 17 puzzled us.  First skipper we've seen this year in our pollinator garden, but what was it?

Butterfly guru Art Shapiro, UC Davis distinguished professor of evolution and ecology, who has studied butterflies for more than four decades--and who posts his research and observations on his Art's Butterfly World website--identified it as Poanes (Paratrytone) melane, the Umber Skipper.

"It's having a HUGE year," Shapiro told us today. "It was extinct in Davis for over 30 years! But it came back a few years ago."

The Umber Skipper is also recorded on his website.  "Although common in parts of the Bay Area where it is an urban 'lawn skipper,'" on our transect this is entirely a species of riparian forest and is generally uncommon or even rare. It perches in dappled light and shade along streamsides, generally well off the ground...In Berkeley it breeds happily on Bermuda Grass, which seems to have not discovered farther inland."

The larvae of this skipper feed on the leaves of various grasses. Wikipedia describes the wings as "umber brown, the forewing with a darker disc and pale spots and the hindwing with a light yellow-brown band."

Quick research indicates that J. B. Heppener of the UC Berkeley Department of Entomology wrote about its 1941 spread in San Diego County in a piece published in 1972 in the Journal of Research on the Lepidoptera.  He mentioned that when it  spread into San Diego County in 1941 it "was sudden and well noted by resident collectors due to its previous absence from the county."

San Diego residents reportedly first encountered it in August 1941. "F. T. Thorne was one of the first collectors to encounter melane and he vividly recounts his excitement upon realizing what was being caught," Heppener wrote.

We know that feeling...that excitement! 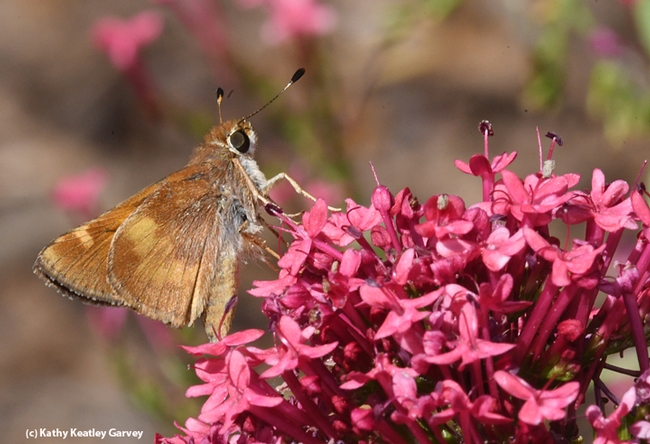