So, you know how it goes, driving down the freeway, singing along with the radio, and then, out of the blue, there's a question. Steve asks, "So what is it that makes oleanders poisonous?"
I was at a loss to answer him, even though I could tell him all about taking care of somebody who has oleander intoxication. Just to be clear, it doesn't happen all that often, but the one time it does it kind of sticks in your head as something you would rather not do.

Oleander, Nerium oleander, is a member of the Apocynaceae family, also known as the dogbane family. It is native to Mediterranean Europe and southwest Asia. It is considered to be one of the most toxic plants. All parts of the plant are toxic from the milky white sap to the sweet aroma from the flowers, to the dead foliage on the plant. Of the animals, horses are the most sensitive to the plants, and (not a big surprise) rodents are the least sensitive. It would be nice if rodents would be sensitive to something, but they seem invincible out there at times. It is reported that the ingestion of a single leaf can kill an average sized man!

So what actually causes the toxic effect? (I want to make sure that I actually answer the question.) All parts of the plant can cause skin irritation if it comes in contact with the skin.  This is because of the saponins, oleandrin, oleandroside and nerioside found within the plant. Skin irritation is the most common toxic effect.  It is also common with exposure to smoke fumes if oleander is burned.  Inhaled smoke fumes can cause severe irritation to the airways as well as cause systemic toxicity due to the cardiac glycosides and digitoxigenin within the plant.  As you can deduce from the names, these compounds have an adverse effect on the heart. Initially the heart rate speeds up, then it slows down to the point of death. The extremities become cold and pale. Generally, people end up in the ER with the earlier symptoms of nausea, vomiting and diarrhea, which may become bloody, and excessive salivation.  As if this wasn't enough, the nervous system is also affected causing drowsiness, tremors, seizures, collapse, coma and death.

If a horse should ingest oleander, generally the first symptom is colic. With dogs and cats one might see drooling.  One might listen for an irregular heartbeat.

So, one would ask, "Why is this plant virtually everywhere?"  It is very drought tolerant and generally looks nice. "So, what should I do with the plants in my personal environment?"  Definitely, one should go with full barrier when working with these plants.  By this I mean gloves, long sleeves and pants, protective eyewear and a mask.  I asked my son about this (he works for the city in the landscape department) and the policy is full hazmat precautions. When they prune or take out a plant, the plant is cut up and put into the garbage.  We should do this with any oleander from our own gardens as well.  NEVER put oleander cuttings into your compost pile either. It seems that the toxic compounds remain despite the heat of the composting process.  And of course, never burn oleander either.

So, what happened to the person with oleander toxicity?  With a couple days of supportive care of the irregular and very slow heart rate and control of the nausea and vomiting, the person went home. As part of the discharge instructions, it was advised that sleeping under the oleander bushes should be avoided.  Good advice to all. 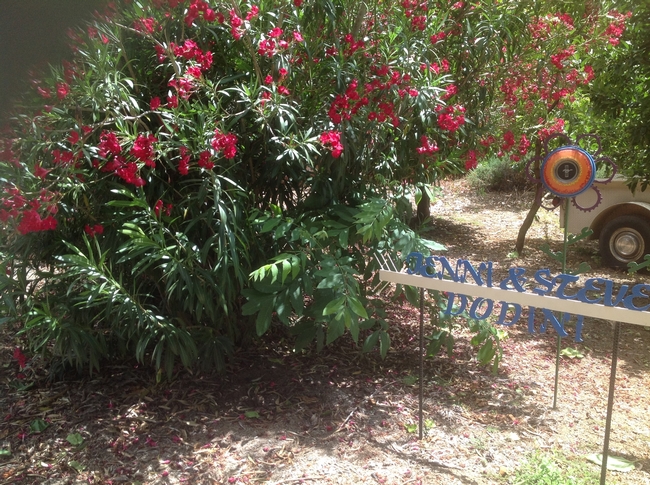 photo by Jenni Dodini
Comments: 2
Comments:
by Donna Seslar
on July 2, 2017 at 7:51 AM
Thanks for your informative blog, Jenni. I have two plants in containers on my deck and have pruned them without hazmat protection. They need to be repotted, so i think they'll be shovel pruned. I wonder what happens when there is a fire that burns the oleanders planted along the freeway? I am reminded of a novel I once read titled "White Oleander ".
by Mark
on May 13, 2021 at 2:00 AM
Very useful info. I keep a lot of oleander in my garden in maputo, mozambique. Always careful to tell guests to stay away from it it, especially children.
Pruned it all a few days ago, propagating the woody stems, but forgot to tell my hardener not to burn the leafy material. Put the fite out with water, and we’ll find a way to properly remove and dispose of the leaves. Burning is def a bad idea
Leave a Reply: