The U.S. Bureau of Reclamation (BOR) is one of the agencies responsible for operating a facility that pumps water from the Sacramento-San Joaquin Delta into the California Aqueduct. The California Aqueduct pumps water for uses south of the facilities. This water is used for agriculture in the San Joaquin Valley valued at $33.4 billon in 2015 (CAC 2015), and for millions of other users in Californian homes and businesses.

Before that water can be pumped, debris, weeds and fish must be removed. This is done at the Tracy Fish Facility. A series of screens and diversions are used to remove the objects and capture the fish. The debris is mechanically removed from the river, and the fish are transported and released downstream from the pumping facility. With no control, large mats of water hyacinth will accumulate and “dam” the screens during peak months in the fall.

At this time mechanical removal of the water hyacinth is happening around the clock, with a string of trucks lined up to carry the weeds away for disposal.

Mechanical removal of waterhyacinth near the Tracy Fish Facility Costs to manage invasive weeds at the Tracy Fish Facility peaked in 2014 and 2015 at the height of California's drought, reaching close to $1 million in each of those years. In 2016, with increased rain and better weed management in the Delta, the costs fell. Between 2013 and 2016 the BOR spent a total of $2.75 million managing aquatic weeds. 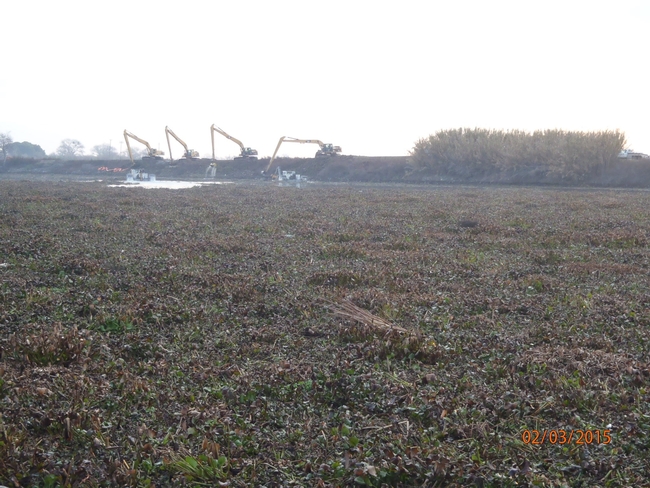