In a ground-breaking discovery encompassing six years of research, an international team of scientists led by UC Davis chemical ecologist Walter Leal announced they've identified the sex pheromone of the pest, which feeds on citrus and transmits the bacteria that causes the deadly citrus greening disease known as Huanglongbing (HLB).

Leal, a native of Brazil and a fellow of both the Entomological Society of America and the Entomological Society of Brazil, revealed the discovery during his presentation Dec. 5 at the 10th Annual Brazilian Meeting of Chemical Ecology in Sao Paulo. His team included scientists from UC Davis, University of Sao Paulo, and the Fund for Citrus Protection (FUNDECITRUS) from the state of Sao Paulo.

“Dr. Leal's discovery of the Asian citrus psyllid pheromone is a significant breakthrough in preventing the spread of this serious citrus insect, and may offer a less toxic method for its control,” said integrated pest management specialist Frank Zalom, distinguished professor with the UC Davis Department of Entomology and Nematology and a past president of the Entomological Society of America. He was not involved in the study.

“Having a lure to dramatically improve captures of this psyllid with the conventional sticky traps is a major progress toward integrated pest management,” said Professor Jose Robert Parra of the University of Sao Paulo.

Identifying the sex pheromone proved “complicated and quite a challenge” because of the insect's complex behavior and biology, said Leal, a UC Davis distinguished professor who has discovered the sex pheromones of moths, beetles, bugs, cockroaches, mites and other arthropods. A patent was filed Friday, Dec. 1, and journal publication is pending.

Native to Asia, the Asian citrus psyllid, Diaphorina ciri, was first detected in the United States in June 1998 in Palm Beach County, Florida, and in California in August 2008 in San Diego County. Scientists discovered HLB in Florida in August 2005, and in Los Angeles in March 2012. The mottled brown insect, about 3 to 4 millimeters long, or about the size of an aphid, is now widespread throughout Southern California and is now found in 26 of the state's 58 counties.

The Asian citrus psyllid, or ACP, feeds on new leaf growth of oranges, lemons, mandarins, grapefruit and other citrus, as well as some related plants. Infected psyllids can transmit the bacterium Candidatus Liberibacter asiaticus, which causes the fatal citrus disease. An early symptom of HLB in citrus is the yellowing of leaves on an individual limb or in a sector of a tree's canopy.

Currently growers are using yellow sticky traps to detect the insect and to monitor the population. “Efficient lures,” Leal said, “are sorely needed for sticky traps, particularly for early ACP detection. Otherwise, growers have to resort to regular sprays to avoid infection given that infected insects from gardens and noncommercial areas migrate to citrus farms.”

Although ACP is present in Arizona and California, the disease itself has not been established, Leal said. “The emphasis is on detection, eradication and limiting the spread of the disease. In Florida, where HLB is widespread, monitoring ACP populations is essential to avoid reinfection after eradication of infected plants.”

The detection of the pest has led to widespread eradication of citrus trees in China, Brazil and the United States. “In Brazil as many as 46.2 million citrus trees, representing 26 percent of the currently planted trees, have been eradicated since the detection of HLB in 2004,” Leal said. “In Florida, HLB has caused severe losses to the citrus industry. This year's production loss is estimated to be about 28 million fewer boxes of oranges than in 2014-2015.”

The announcement of the discovery coincides with the 40th anniversary celebration of FUNDECITRUS in Araraquara, Sao Paolo. “I am delighted that Walter Leal accepted our challenge to work on this project as the lead investigator,” said Juliano Ayres, FUNDECITRUS director. “The combination of his work ethics and qualifications are unparalleled. And, he loves challenges.”

In response to the ACP invasion in California, the California Department of Food and Agriculture (CDFA) has launched an extensive monitoring program to track the distribution of the insect and disease. They check yellow sticky traps in both residential areas and commercial citrus groves, and also test psyllids and leaf samples for the presence of the pathogen.

Survey methods for ACP include visual inspections, sweep netting, and placement of yellow sticky traps in trees in citrus nurseries, commercial citrus-producing areas and residential properties throughout the state, according to the CDFA. They also place sticky traps in California fruit packing houses, specialty markets, retail stores and airports that receive such produce from areas known to be infested with ACP.

CDFA has set up a hotline at 1-800-491-1899 for residents to report suspicious insects or disease symptoms in their citrus trees.

Save Our Citrus: Hotline Information

(Update: The research was published in the Jan. 11 edition of the journal Scientific Reports.) 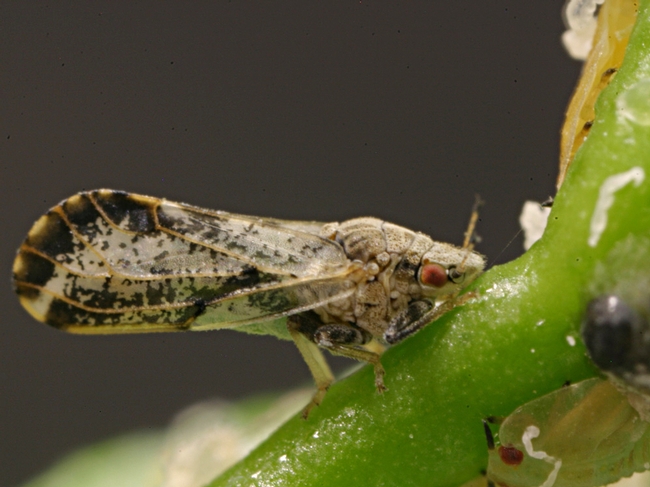 This is the Asian citrus psyllid, a mottled brown insect about 3 to 4 millimeters long, or about the size of an aphid. Widespread throughout Southern California, it is now found in 26 of the state's 58 counties. (CDFA Photo) 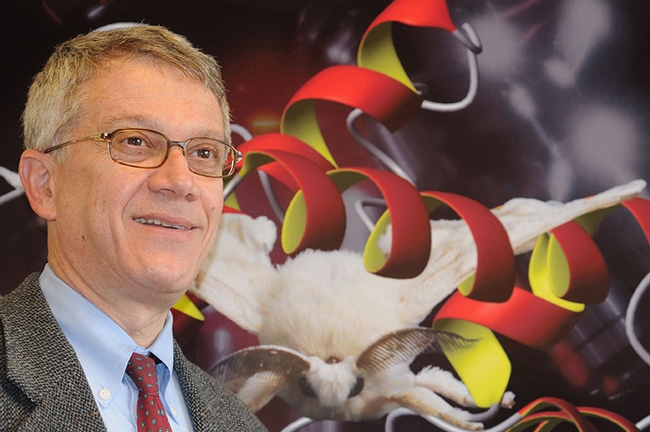 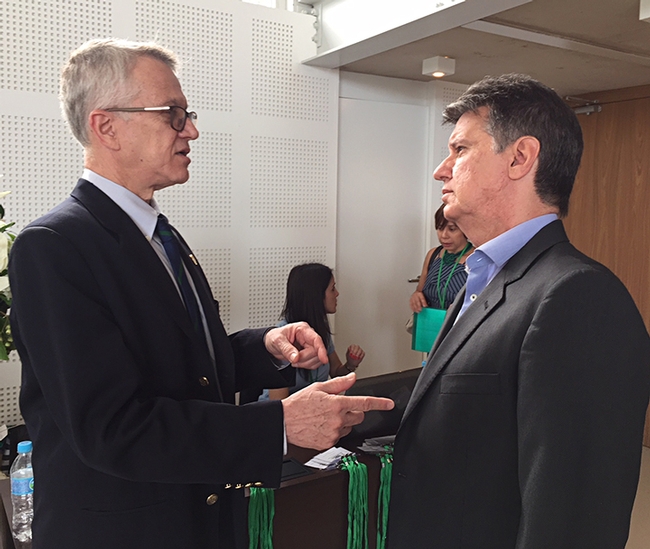 UC Davis chemical ecologist Walter Leal (left) talks with FUNDECITRUS director Juliano Ayres on Dec. 5 at the 10th Annual Meeting of Chemical Ecology in Sao Paulo.
Tags: Asian citrus psyllid (6), Candidatus Liberibacter asiaticus (1), chemical ecology (11), Diaphorina ciri (1), Entomological Society of America (115), ntomological Society of Brazil (1), UC IPM (50), Walter Leal (91)
Comments: 1
Comments:
by M Fátima G F Silva
on December 20, 2017 at 10:41 AM
Congratulations to all the researchers involved in this discovery.
Excellent work of great importance for citriculture.
It was a pleasure, as coordinator of the X Brazilian Meeting of Chemical Ecology, to have had this disclosure during the event.
Leave a Reply: