Scientists have been puzzled by the fact that the San Joaquin Valley often suffers high ozone levels even though the mostly rural, agricultural domain has fewer cars and trucks than big cities. Research by UC Davis scientists is now showing that some of the ozone in the valley is being generated by fermented animal feed, according to a story posted yesterday on the website Science News.

While ozone provides a protective barrier for the earth in the stratosphere, it is an unwelcome molecule to have around where people are breathing. Ozone (O3) is a powerful oxidizing agent, far stronger than O2. It can harm lung function and irritate the respiratory system.

The UC Davis team, led by environmental engineer Cody Howard, tested seven types of animal feed in a one-meter-square tented chamber, according to writer Janet Raloff, author of the Science News story. They added a mix of gases that matched the valley’s air and simulated sunlight with lamps. The result was lots of ozone.

Corn silage generated about 125 parts per billion ozone, alfalfa silage a little less, and mixed oat-wheat silage 210 ppb, Raloff reported. These emissions pale in comparison to cars. However, because the San Joaquin Valley has so much silage to feed its animal agriculture industry, the feed appears to be the single biggest contributor to the region’s ozone problem, the story said. 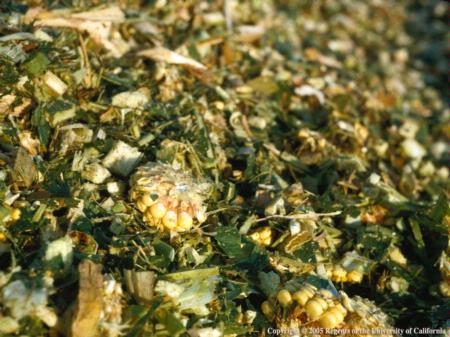