It's that time of year to see some drama in avocado orchards. Once healthy-looking trees can suddenly turn brown in a weekend and all the surrounding trees still look fine. And it can be quite common in some years along the coast. The winter weather will have mild, cool even rainy days and then suddenly there's one of those 97 deg days and the tree goes down,

The entire tree or only one or several branches wilt suddenly when affected by Verticillium wilt. Leaves turn brown and die, but the dead leaves usually remain on the tree for several months. Brown to gray-brown streaks are visible in the xylem of the branches or roots when the bark is removed.  Sometimes the streaking is visible in the branches, but often it is found at the base of the trunk.

Trees with Verticillium wilt often send out new, vigorous shoots within a few months after the initial wilting. If well cared for, affected trees often recover completely with no reoccurrence of the disease. However, not all trees survive an infection and disease symptoms sometimes reoccur after an apparent recovery.

The fungal pathogen Verticillium dahliae infects many hosts, including various berry and flower crops, cotton, eggplant, olive, pepper, stone fruit trees, strawberry, and tomato. Verticillium wilt is present throughout the state but is less common in avocado than root rot and canker diseases. Verticillium dahliae persists for years as microsclerotia in soil. Microsclerotia spread in infested organic matter and soil that is moved. The fungus infects through feeder roots, and then moves up in the water-conducting xylem system, restricting or preventing water movement to foliage from the roots.

No known methods are effective in curing infected trees. Trees often recover completely and display no further symptoms, even though they are still infected. After dieback ceases and new growth begins, prune off dead branches. Provide optimal irrigation and modest fertilization to promote new growth. If a tree dies from Verticillium, remove it. But give it a chance, there's a good chance it will recover. 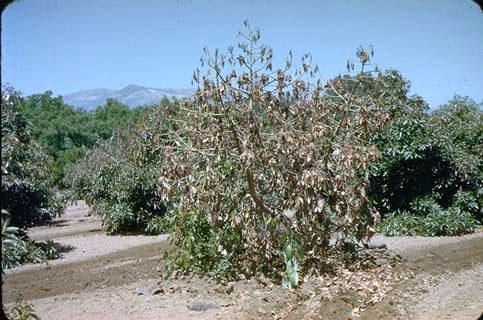