She's the recipient of a prestigious three-year fellowship, a National Defense Science and Engineering Graduate Fellowship, for her research proposal, “Promoting Food Security by Optimizing Wildflower Plantings to Support Wild and Managed Bees.”

This highly competitive fellowship, funded by the Department of Defense, drew more than 3600 applicants. Maureen was one of 69 awardees.

“The fellowship is well deserved,” said Williams,  her major professor and a pollination ecologist and a UC Davis Chancellor's Fellow.  “Maureen is a talented researcher, who shows a real passion for her research that is combined with a highly analytical meticulous approach.”

Of her project,  Williams said: “Her work melds careful field sampling with advanced analysis, including computational optimization modeling. It will move existing research to a new level by exploring the nutritional basis of competitive interactions among pollinators. The project builds from a solid foundation but his highly innovative. Its results should be of tremendous value to the scientific community, but are also highly relevant for decision making to promote sustainable food systems for California and beyond.”

“I became interested in UC Davis because I was interested in working in Neal's lab,” she related. “After my sophomore year of college, I participated in National Science Foundation's Research Experiences for Undergraduates (NSF REU) with the Chicago Botanic Gardens. One of the professors I was working with, Jennifer Ison, told me that my research interests aligned well with the work coming out of Neal's lab and I quickly realized she was right.” A honey bee gathering pollen on a California golden poppy. (Photo by Kathy Keatley Garvey)
“I even bookmarked the Williams lab webpage so I could check for recent papers!” Page said. “Neal is an even better advisor than I could have hoped for and I feel very grateful to be a part of UC Davis Department of Entomology and Nematology.”

“I've always loved flowers and I think my love of bees grew out of my academic interest in pollination ecology and a desire to apply my talents towards research that would benefit farmers and pollinator conservation efforts,” said Page, a native of San Francisco but who grew up in Ashland, Ore.

As a volunteer researcher for Southern Oregon University, she worked on a watershed project in the Klamath-Siskiyou Wildlands Center, and was named the City of Ashland's Conservationist of the Year in April 2012. The city honored her at its Earth Day celebration. Doctoral student and pollination ecologist Maureen Page working in a field of wildflower plantings.
What fascinates her about bees? “Tough question!” said Page, who is the first entomologist in her family. “Bees are so very interesting for so many different reasons! I'm particularly fascinated by the relationship between bees and flowers--with bees acting as pollinators and flowers offering bees important pollen and nectar resources. I think the biggest misconception is that all bees are honey bees. In fact, there are more than 20,000 species in the world, only 7 of which are considered honey bees!”

“My field season has started, so on an ‘average day' I'm at one of my lab's wildflower plantings by 7 a.m. and driving home with coolers of bees and flowers around 7 p.m.,” Page said. “The most fun part of my fieldwork is using something called a ‘mobile bouquet' to measure single-visit pollen deposition by different pollinator taxa to different plant taxa.”

Page was awarded a grant from the Davis Botanical Society earlier this year, and won second place in the graduate students' poster competition at the 2018 UC Davis Bee Symposium for her poster, “Impacts of Honey Abundance on the Pollination of Eschscholzia californica. Last year she received a Northern California Botanists' Grant and a Davis Botanical Society Grant.

Eager to reach youth about the importance of pollinators, Page began volunteering in 2016 for the Center for Land-Based Learning, mentoring students from Sacramento High School, and engaging them in hands-on conservation science at Say Hay Farms, a 20-acre family farm in Yolo County. She has taught students at her Davis area field site about the benefits of providing wildflower habitat for pollinators.

The UC Davis doctoral student has also presented lectures at the Hoes' Down Harvest Festival, Yolo County, on “Pollinators on the Farm” and led a kids' bug hunt. She presented an invited lecture on “Beneficial Insects in Home Gardens” to the El Dorado Master Gardeners, part of the UC Cooperative Extension program, and volunteered at their other activities. 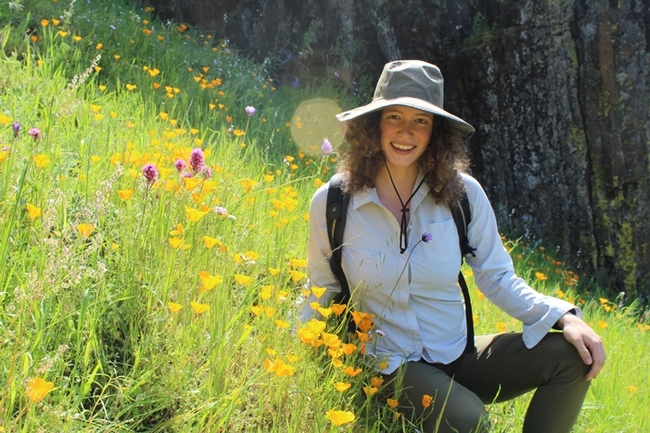