Especially when it comes to bumble bee colonies.

Postdoctoral scholar Rosemary Malfi of the Neal Williams lab, University of California, Davis, will speak on “Timing Is Everything: Bumble Bee Colony Performance in Response to Seasonal Variation in Resources” at 4:10 p.m., Wednesday, May 30 in 122 Briggs Hall.

“Wild bee populations are considered to be strongly regulated by the availability of flowering resources on which they rely for food, that is, pollen and nectar, yet we lack robust, experimental data demonstrating the mechanistic connections between the floral resource environment and bee population health," Malfi says. "The temporal distribution of resources, in particular, is an understudied but potentially highly influential aspect of habitat quality affecting bees. Bumble bees (Bombus spp.) are annual, euosocial insect with high conservation value. Because their colonies must grow for several weeks before reproducing the timing of within-season resource abundance and scarcity is especially likely to impact their demographic performance."

At her seminar, Malfi will describe her postdoctoral work here at UC Davis,  "in which we investigated the importance of the timing of floral resource abundance for bumble bee (Bombus vosnesenkii) colony success through two large field experiments involving the manipulation of the food environment that colonies experienced. In the first study, we assessed how differences in the resource environment early in colony development affected both individual and colony level traits across the season using radio-frequency technology (RFID) and mark recapture methods. In the second study, we determine whether a pulse of food resources early in development, compared to a pulse delivered later during the 'pre-reproductive' phase, has a greater or similar impact on the peak size and reproduction of bumble bee colonies. We use a null method of exponential colony growth to explore whether resource pulses have persistent effects on colony growth after the pule itself has disappeared. Together these studies demonstrate that resource abundance early in development is critical for the success of bumble bee colonies, and this populations."

A native of Philadelphia, Rosemary received her bachelor of arts degree from Bryn Mawr College, an all-women's liberal arts school in the greater metro area, and worked two years at the Academy of Natural Sciences of Philadelphia as a lab manager for the in-house Patrick Center for Environmental Research.

Mali holds a doctorate in environmental science (ecology) from the University of Virginia in 2015 , studying with major professor T'ai Roulston.   She focused her doctoral research on the influence that flower (i.e. food) availability and parasitism have on bumble bee (Bombus spp.) population dynamics, and how risks associated with these factors vary among species within a community. In her work, integrating field observations, parasite analysis, colony manipulations, the use of radio frequency technology, and simulation modeling, she investigated these sources of environmental influence independently and interactively through studies that focus on bumble bee populations and environmental risks present in northern Virginia.

Among the bumble bee parasites Malfi has studied: Nosema bombi, a pathogenic fungus implicated in "the precipitous and rapid decline of several bumble bee species across North America." During her graduate studies, she became especially interested in the interaction between bumble bees and one of their parasitoids, the conopid fly. "Although the basic biology of this interaction has been described," she says, "little is currently known about the ecology of this host-parasitoid relationship, particularly in North America." Malfi discussed her work on the conopid fly at the January 2016 open house of the Bohart Museum of Entomology, UC Davis.

Malfi's postdoctoral position at UC Davis ends in September, and then she will be moving to Massachusetts with her family. She will be working in the lab of Lynn Adler at the University of Massachusetts, Amherst, to carry out research on the influence of diet on bumble bee colony development and health.

Career plans? "For now, my career plans are to continue pursuing research on wild bee population health," she says. "In my next position at UMass Amherst, I'll be focusing on how the diet of bumble bees may mediate the influence of pathogenic parasites on individual- and colony-level performance." 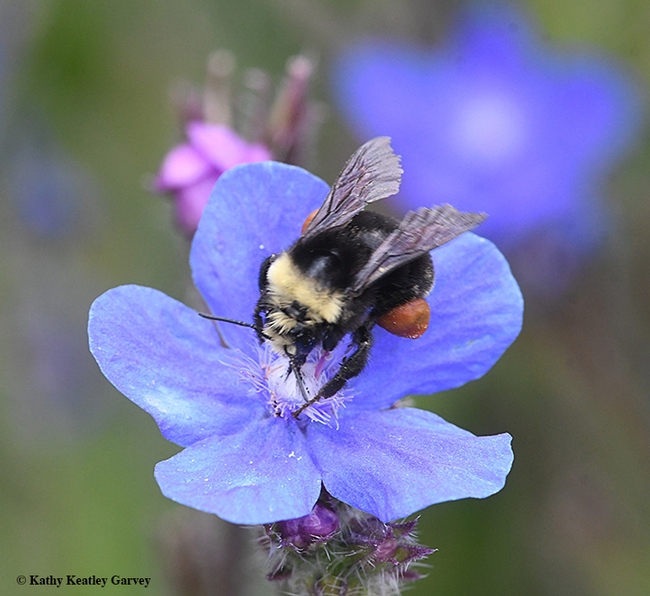 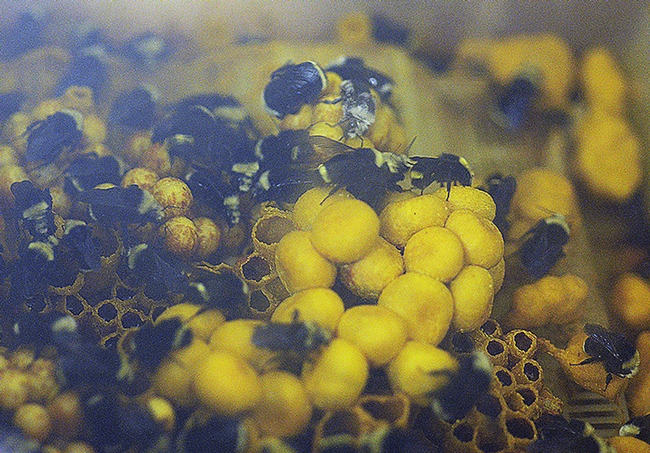