This quote, often falsely attributed to Mark Twain, is a favorite of Art Shapiro, distinguished professor of evolution and ecology at the University of California, Davis.

Speaking at the second annual Butterfly Summit last Saturday, May 26 at Annie's Annuals and Perennials, Richmond, Shapiro discussed his research and offered his observations and views on the state of butterflies.  He maintains a website at http://butterfly.ucdavis.edu/

Shapiro has monitored butterfly population trends on a transect across central California for 46 years. The 10 sites stretch from the Sacramento River Delta through the Sacramento Valley and Sierra Nevada mountains to the high desert of the Western Great Basin. Shapiro visits his sites every two weeks "to record what's out." The largest and oldest database in North America, it was recently cited by British conservation biologist Chris Thomas in a worldwide study of insect biomass.

"The vast majority of the butterflies we monitor are emerging earlier in the year now than they were in the 1970s," Shapiro said. He mentioned the Red Admiral butterfly, Vanessa atalanta, which spends the winter as an adult, is "our biggest responder to global warming, coming out 21 days earlier on average that it use to, exactly the same in England, same species. It's not weird at all. It is winter active." A newly eclosed monarch butterfly. (Photo by Kathy Keatley Garvey)
"Things rebounded during the drought," the professor said. "We began getting better data both in terms of numbers of species and abundances. A blast from the past...When the drought ended, we had a very wet year two years ago, and now things are sliding down again. What is going on, ladies and gentlemen? What is going on?"

Shapiro noted that by and large, immature butterflies spend the winter underground or right at the surface. "This is the worst possible environment for overwintering butterflies in the early stages, what with the combination of warm and wet." The high humidity and temperature are very favorable for fungal and bacterial pathogens, he said, adding that  "Overwintering survival in warm wet conditions is poor."

"When we have a dry winter, it's colder at night but not cold enough to be lethal, he said. "It's a healthier environment to be an overwintering caterpillar. That's what we think is going on."

In the mountains or higher elevations, changes are strongly correlated with climate. "As it gets too warm and dry down below, butterflies are moving uphill, but plant resources are moving up the slope more slowly. When resources are not available yet higher up, butterflies have a real problem. There's no where to go at all for truly alpine species; they're already at the top of the mountain. The next stop is heaven." Shapiro described the decline of butterfly populations in the mountains as "worrisome."

Neonicotinoids, which Shapiro defined as "a class of synthetic pesticides chemically derived from the chemistry of nicotine," are often targeted as a cause of butterfly decline. "Neonics are not in Scotland and there's been no butterfly decline in Scotland," he pointed out. "But, anyone who has taken a statistics course knows that Correlation Is Not Causation."

Turning to monarchs, Shapiro said "More than half of the questions I get from the public deal with monarchs."

Describing the monarch as "the poster child for conservation,"  Shapiro said: "There's a lot of stuff out there in the media, and it's not all to be believed." Butterfly population counts differ from summer breeding data and the overwintering data.

"If you want the scoop on monarchs--unconnected with fundraising or politics," he said, "read Anurag Agrawal's book, Monarchs and Milkweed."  The book is subtitled "A Migrating Butterfly, a Poisonous Plant and their Remarkable Story of Coevolution." Agrawal, the James A. Perkins Professor of Environmental Science at Cornell University, Ithaca, N.Y., received his doctorate in population biology from UC Davis in 1999.

"Monarchs in California have had a long decline, perhaps more dramatic than the decline in the Midwest and the East," Shapiro said, adding they have never been as common in California than they are in the East. "If they're relatively scare, that doesn't mean a decrease. We need to do comparisons over time. During the drought, they came back. We don't know why."

"Monarchs can't breed in the winter here under natural conditions," Shapiro said. "A non-native, non-dormant milkweed, tropical milkweed (Asclepias curassavica) allows winter breeding. These plants are often contaminated with the parasite, Ophryocystis elektroscirrha or OE, a problem in Southern California, but not yet in northern California. "People who are really committed to native plants would like you to get rid of your exotic tropical milkweed and replace it with native species that go dormant." He recommends "cutting them back three times a year" to allow fresh new growth.

Some of his take-home messages: 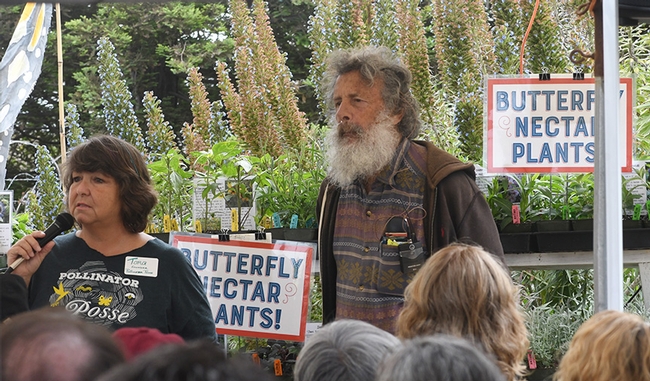 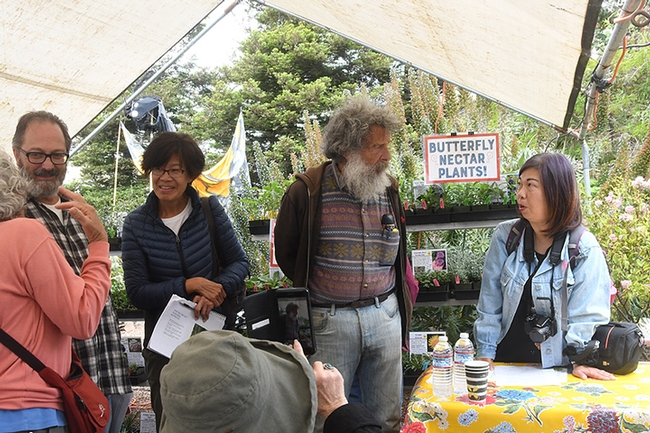 Following Art Shapiro's talk, attendees line up to speak to him. (Photo by Kathy Keatley Garvey) 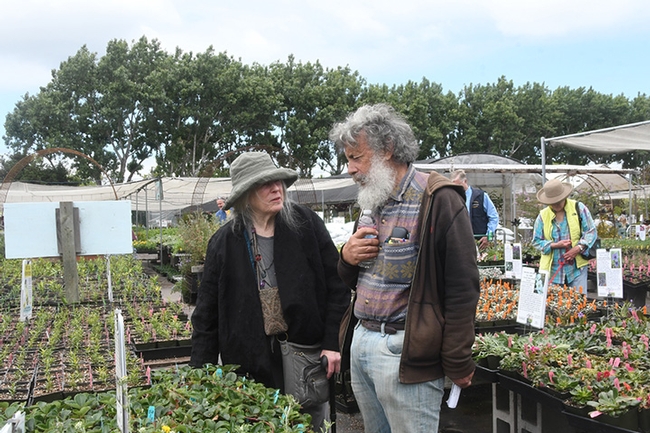