World-renowned entomologist and toxicologist John Casida of UC Berkeley, died June 30 at his home in Berkeley.
Graduate students and postdoctoral students that the legendary John Casida trained remember him with great fondness, respect and appreciation.

Dr. Casida, 88, a world-renowned entomologist and toxicologist at UC Berkeley who died June 30 of a heart attack in his home, was a global authority on how pesticides work and their effect on humans.

A distinguished professor emeritus of environmental science, policy and management and of nutritional sciences and toxicology, Dr. Casida was the founding director of the campus's Environmental Chemistry and Toxicology Laboratory.

When awarded the Wolf Prize in Agriculture in 1993, the Wolf Foundation lauded his “research on the mode of action of insecticides as a basis for the evaluation of the risks and benefits of pesticides and toxicants, essential to the development of safer, more effective pesticides for agricultural use." according to a UC Berkeley News Service story. "His discoveries span much of the history of organic pesticides and account for several of the fundamental breakthroughs in the fields of entomology, neurobiology, toxicology and biochemistry.” Bruce Hammock as a graduate student at UC Berkeley.
Former graduate student Bruce Hammock, now a distinguished professor at the University of California, Davis, who holds a joint appointment with the UC Davis Department of Entomology and Nematology and the UC Davis Comprehensive Cancer Center, remembers him as a “lifelong mentor who evolved into a colleague and a friend.”

“John probably had a greater impact on his field of pesticide toxicology than any scientist of his generation,” said Hammock,  founding director (1987-present) of the UC Davis NIEHS (National Institute of Environmental Health Sciences) Superfund Research Program and 25-year director of the UC Davis NIH/NIEHS Combined Analytical Laboratory. “His laboratory at Berkeley provided me with the most exciting years of my scientific career.  In his own work, John moved from strength to strength creating numerous entire fields along the way. His scientific insight and drive were a constant stimulation to drive for innovation and excellence. Whenever I had an opportunity, I encouraged others to join his team. John was an inspiration and role model, not only because John came in early and stayed late, but also because he did science for the fun of discovery and taught for the joy of teaching.”

“John continued his high productivity until his death with major reviews on pesticides in 2016, 2017, and 2018 in addition to numerous primary papers,” Hammock noted. “He was working on primary publications as well as revising his toxicology course for the fall semester at the time of his death. Pesticide science was the theme of his career, and we live in a world with far safer and more effective pest control agents because of his effort.”

Professor John Casida opened multiple new fields ranging from fundamental cell biology through pharmaceutical discovery. "He pioneered new technologies throughout his career, from being one of the first to use radioactive compounds for pesticide metabolism through studies with accelerator mass spectrometry, photoaffinity labeling and others," Hammock related. "Yet the greatest impact of his career probably lives on in the numerous scientists he trained, now carrying on his traditions of excellence in science. These scientists are around the world in governmental, industrial and academic careers.” Sarjeet Gill, distinguished professor at UC Riverside
“It was clear to me the day I arrived at UC Berkeley that I had to work with John," quipped former graduate student Sarjeet Gill of the Casida lab, now a distinguished professor at UC Riverside. "I remember walking into his office and indicating that I would like to work with him. His response, very Johnlike: 'How are you going to support yourself?' When I indicated I had a UC Berkeley fellowship, John gave me a trial project to test my abilities. I then knew, early on, that I needed to have my act together. He then gave me the freedom to make mistakes, allowing me to work through misadventures but correcting them as needed, ultimately leading to a successful project.

"This project also allowed me to build a long lasting friendship with Bruce Hammock who also was on the same project. Since John was always very focused, I often challenged John's patience with my practical jokes. I am sure he knew who the culprit(s) were but he never revealed he knew.

“The research experiences in John's lab made an indelible impression on me that drove me to return to the United States from Malaysia for an academic career in the UC system. Personally, I have lost an incredible mentor, and the scientific community lost the most preeminent pesticide toxicologist in the last two centuries. John changed the way we investigated mechanisms of toxicity at all levels. I certainly will miss him dearly. Bruce Hammock, distinguished professor at UC Davis (Photo by Kathy Keatley Garvey)
"My mentors from Louisiana State University told me there was only one toxicologist to work for as a PhD student," recalled Bruce Hammock. "I had money to apply to only one university, so I headed west in 1969 to study with John Casida (without informing him). I had the misfortune to arrive in John's laboratory several hours after Sarjeet Gill. In the basement of Wellman Hall, I spied a man in a lab coat from whom I inquired the location of Professor Casida. He replied: 'Let's see if we can find him,' and continued looking in cabinets filled with bottles. He soon found a bottle, pocketed it, walked into an office at the end of the hall and announced, 'We have found him.'

"After telling him I was there to be his graduate student, he replied he had no money for students. My retort was that I had a fellowship. He then told me that students were not space effective, and I promised not to take up much space. He continued that students were not time effective, and I promised not to take his time. In retrospect, Sarjeet must have really soured him on graduate students a few hours earlier."

"Months later, Sarjeet and I were sharing a desk-lab bench in the windowless closet next to the 'fly room' when Dr. Casida walked in. He had noted we both listed him as our major professor and asked if there was anything, he could do to encourage us to leave. When in unison we replied 'No!,' he politely left without accepting us, but soon we both had a desk and bench.

"So a few paces after Sarjeet, I initiated the most thrilling four years of my life. John's introduction to experimental science was marvelous with the perfect balance of inspiration, instruction and tremendous freedom. I was privileged to learn from a wonderful group of individuals and, of course, I made my most enduring of friendships with Sarjeet Gill. In addition to science, John taught a life-family-science balance by example. John was my life long mentor in science and in life but also evolved as a colleague and friend.

"Three more delightful years passed and John then took me to lunch at the faculty club. As I was about to leave the laboratory for the U.S. Army, he gave me sagely advice such as he had had it easy during the Sputnik period and I would have it hard. Then he went on to tell me than most people in the laboratory did not find my practical jokes nearly as funny as I did. I did not reveal that Sarjeet had both planned and executed most of them. Thus, Sarjeet succeeded in disrupting my Berkeley career from beginning until the end.

"John and his laboratory at Berkeley provided me with the most exciting years of my scientific career.  In his own work, John moved from strength to strength creating numerous entire fields along the way. His scientific insight and drive were a constant stimulation to drive for innovation and excellence. Whenever I had an opportunity, I encouraged others to join his team. John was an inspiration and role model, not only because John came in early and stayed late, but also because he did science for the fun of discovery and taught for the joy of teaching."

Professor Casida is survived by his wife, artist and sculptor Kati Casida, sons Mark and Eric Casida, and two grandchildren. 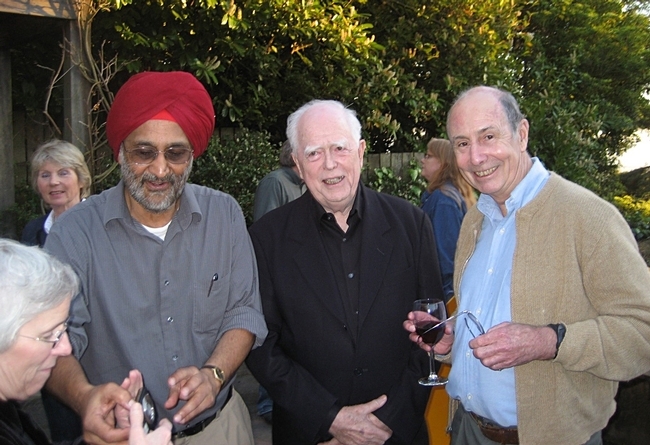