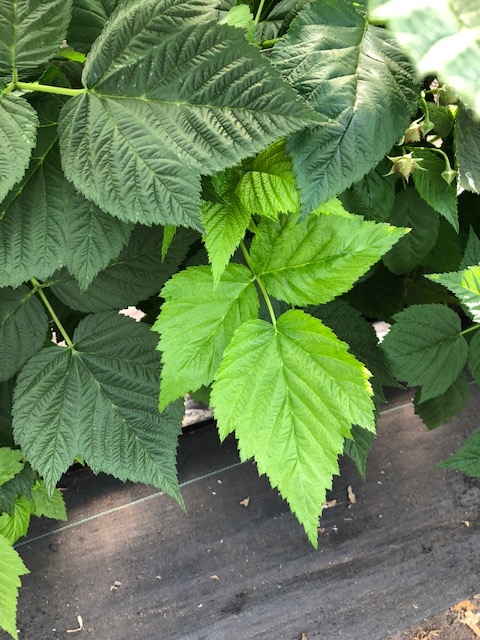 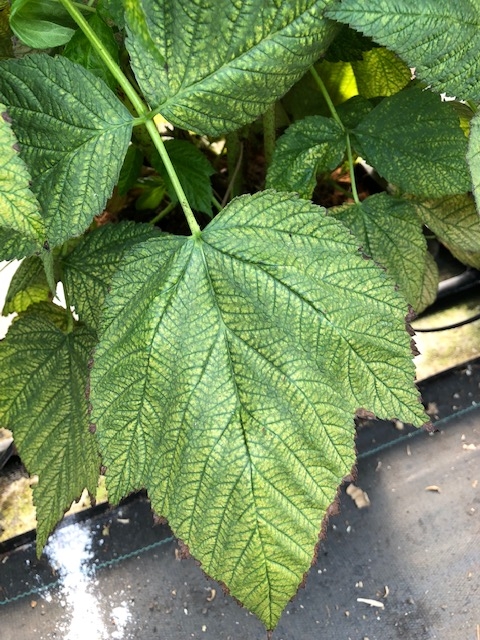 On the other hand, many of the very oldest leaves were showing these symptoms, which look a lot like heat or salt damage.
Tags: iron (3), nitrogen (17), plant nutrition (3), raspberry (24), substrate (1)
Comments: 8
Comments:
by Thom Flewell
on November 5, 2018 at 10:40 PM
Check out an article a guy named Bolda wrote in this blog June 22, 2013. Symptoms are described and shown to be similar to those here in new growth. Tissue analysis shows high K, low slightly low Ca, Mg, but most notably, Fe - 380 compared to 336 in the present case. Is there a linkage between high K and insufficient Fe?
by Mark Bolda
on November 6, 2018 at 12:03 PM
Hi Thom, boy you sure do read this closely. Let me look at that blog post here shortly and compare it to what we have here. It could be informative - thanks!

Mark
by Mark Bolda
on November 7, 2018 at 12:13 PM
Hi Thom,
I have had some time to review this. You are indeed right, in both the 6/22/2013 post and this one K is quite a bit higher in the new leaves than the older ones. However, in reviewing one of my plant nutrition books (the very accessible "Plant Nutrition and Soil Fertility Manual" by J. Benton Jones, Jr.), K actually increases the mobility and solubility of Fe, which sounds like it would be the opposite of what we see here.
So, I would still stand on N outrunning the ability of the plant to move Fe to these new leaves, rather than an inhibition brought about by high K.

You can subscribe to this blog simply by going to the “subscribe” link on the left side of this blog.
Let me know if that doesn’t work and I’ll help you figure it out.

Mark
by MIGUEL AHUMADA
on November 29, 2018 at 10:11 AM
I wonder if the results are the same if the sample was sap petiole..would this result will be different ? In a substrate production, we have a 7/24 control..see the Salts in the edge but what the mottle yellowing mean in term of mineral efficiency...see it a lot in heavy soil, and some var. are more affected than others
Leave a Reply: