Monarch chrysalis. (Photo by Kathy Keatley Garvey)
A monarch chrysalis at the Bohart Museum of Entomology, University of California, Davis proved to be a big hit.

This particular monarch chrysalis was not the immature stage of a monarch butterfly but a piñata--complete with an emerging parasitoid--cleverly crafted by UC Davis doctoral student Charlotte Herbert Alberts and her husband, George, and recent UC Davis graduate Emma Cluff.

The sculpted larva of what monarch enthusiasts call the "dreaded tachinid fly" protruded from the piñata. It was the first to go, victim of a direct hit.

The annual pre-Halloween party presented by the Bohart Museum Society, draws assorted arthropod costumes, from assassin bugs to praying mantids to peacock spiders, but the annual piñata breaking contest, is always "the" smash hit. You can almost feel the whops, wallops and whammies, along with the one-two-three punches (each hitter gets three swings) as the crowd cheers.

Then there's the scramble for the candy.

The Bohart Museum is the home of some 8 million insect specimens, plus a live "petting zoo" (Madagascar hissing cockroaches, walking sticks, tarantulas and praying mantids) and an insect-themed gift shop. It's directed by Lynn Kimsey, UC Davis professor of entomology. Those who join the Bohart Museum Society look forward to their invitation to the annual pre-Halloween party, which this year featured a parasitoid theme. (See Oct. 29 Bug Squad blog).

How much of a smash hit was the piñata? See the images below and the YouTube video. 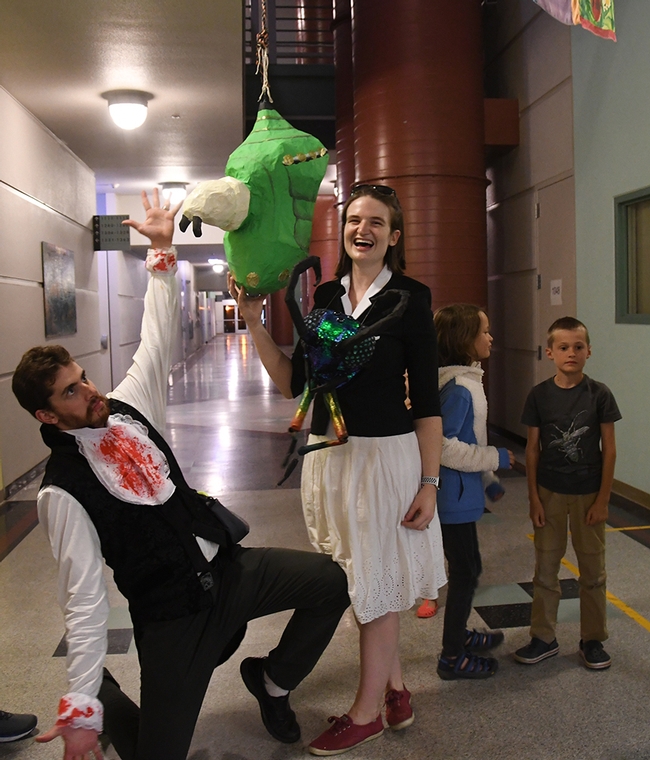 Two co-creators of the monarch chrysalis piñata--Charlotte Herbert Alberts and husband George Alberts--pose with the piñata just before the start of the game. (Photo by Kathy Keatley Garvey) 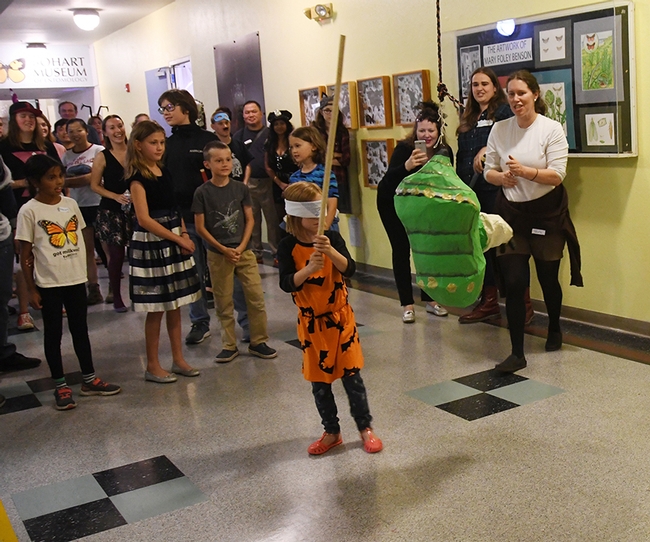 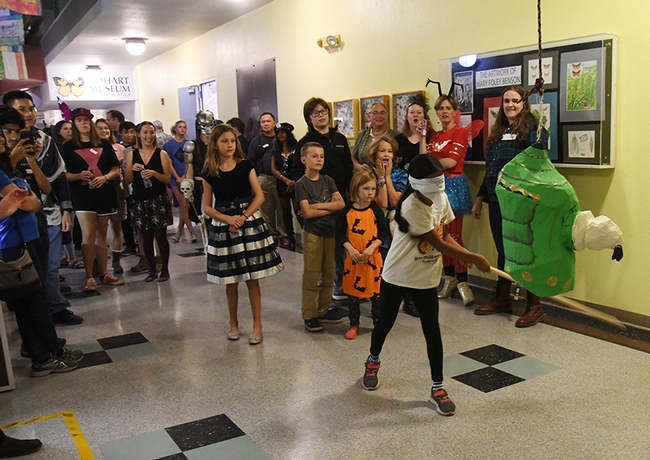 A direct hit and the crowd cheers! (Photo by Kathy Keatley Garvey) 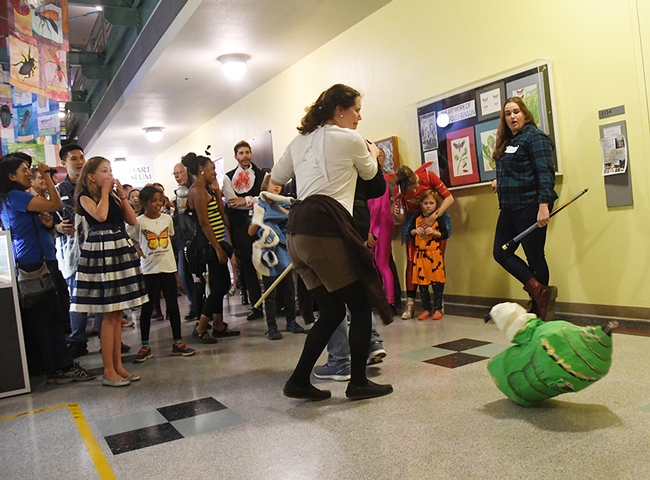 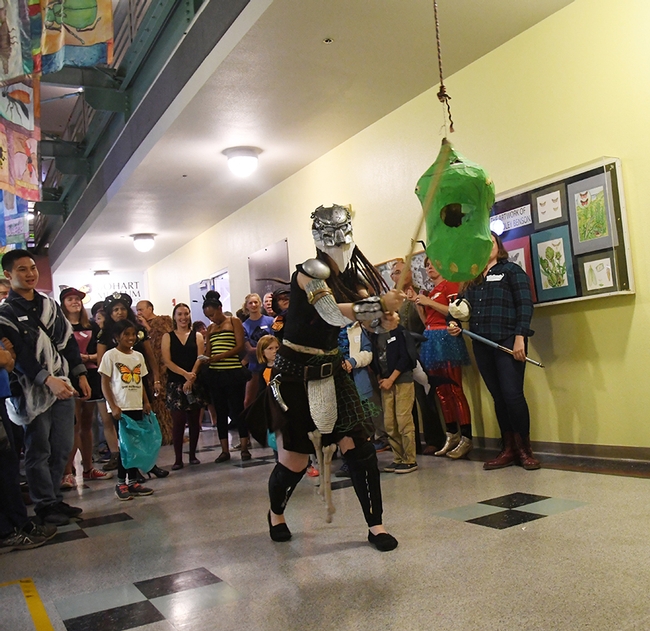 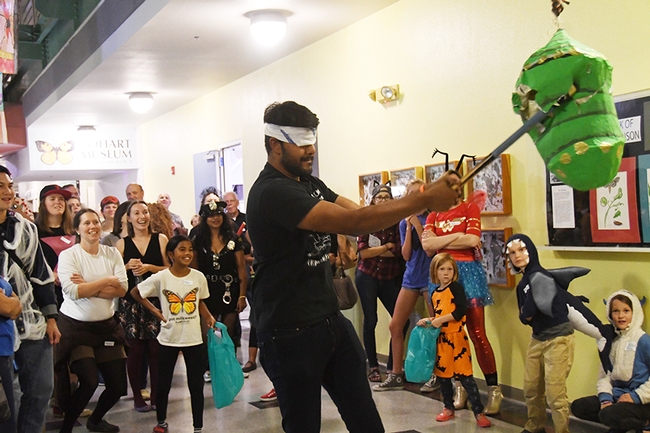 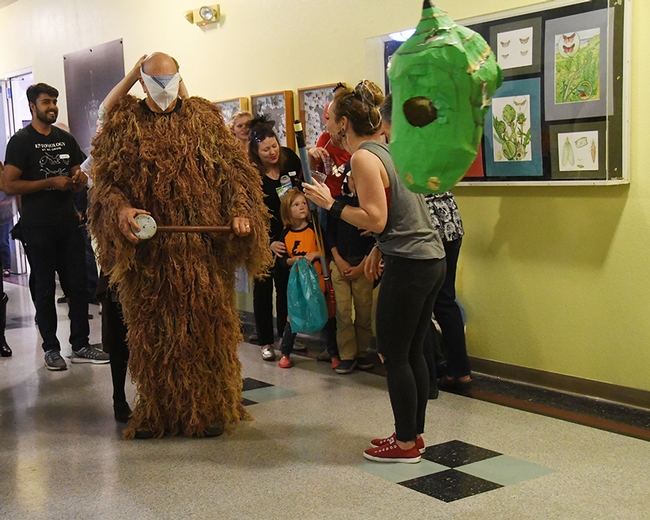 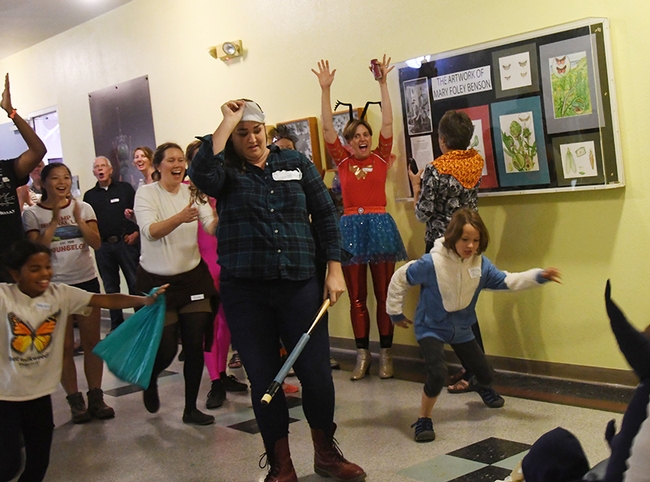 The exact moment: we have a winner! Emma Cluff removes her mask as the crowd applauds her victory. (Photo by Kathy Keatley Garvey) 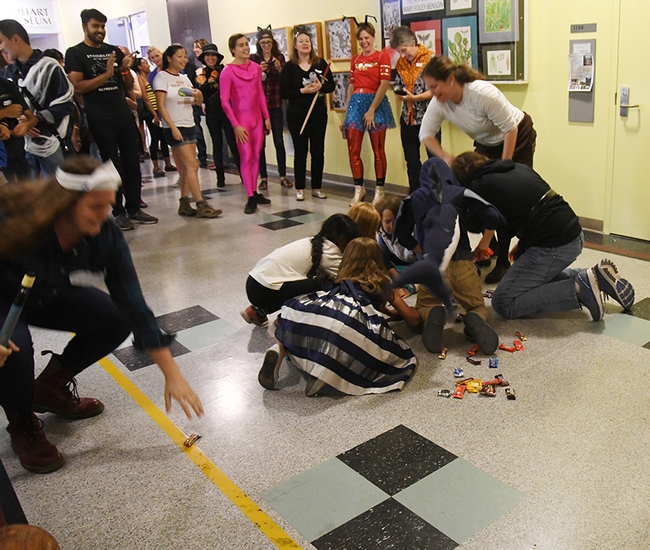