This is the creative invitation, the work of UC Davis undergraduate entomology student and talented artist Karissa Merritt.
What a night of frights and delights!

The Bohart Museum Society hosted the Bohart Museum of Entomology's 24th annual pre-Halloween party on Saturday, Oct. 27 at the University of California, Davis,  billing it as “They Come From Within" and promising a “haunting night full of frights and delights."

You can thank the emerald cockroach wasp or jewel wasp (Ampulex compressa), an entomophagous parasite, for that! It is known for its unusual reproductive behavior, in which it stings a cockroach and then uses it as a host for its larvae, eating it alive.

That was the critter depicted on the invitation.

UC Davis entomology undergraduate student and talented artist Karissa Merritt created the much-applauded, wasp-inspired invitation. "For this year's Bohart Halloween party invite, I set out to create an original--fake--movie poster, inspired by old B-movies such as 'Them' and 'Invasion of the Saucer Men,'" she explained. "I really wanted the invitations to grab people's attention with the bright colors, and grotesque horror as a giant jewel wasp--based on Ampulex compressa--emerges from a living man's chest."

It did. It also grabbed the attention of UC Davis entomology doctoral candidate Charlotte Herbert Alberts, who studies Asilidae (Assassin flies) with her major professor, Lynn Kimsey, director of the Bohart Museum and professor of entomology.  "I made my costume to honor Karissa's incredible drawing of the invitation," said Charlotte, who anticipates receiving her Ph.D in 2020.  Her husband, George, dressed as Dracula. Their Brittany Spaniel, Westley, declined to wear a dinosaur costume and came as himself.

At the entrance, assorted mustaches and masks commanded a table. A sign urged people to "write a name tag, yet disguise yourself if you aren't in costume." (With the addition: "I know it doesn't make sense; just humor us.")

Among those coming as themselves were entomologist Jeff Smith, who curates the butterfly and moth collection; his wife, Cathy; and Bohart associate and naturalist-photographer Greg Kareofelas.

Senior museum scientist Steve Heydon wore an orange jumpsuit lettered with "Department of Corrections" while his wife, Anita, came dressed as a police officer, complete with badge and handcuffs.

Meanwhile evolutionary ecologist Scott Carroll, at 6'11", towered over everyone. "I can pick him out in a crowd," quipped his wife, entomologist Jenella Loye.

(See tomorrow's Bug Squad blog for more Halloween images, including the pinata breaking game. The pinata? A replica of a monarch chrysalis.) 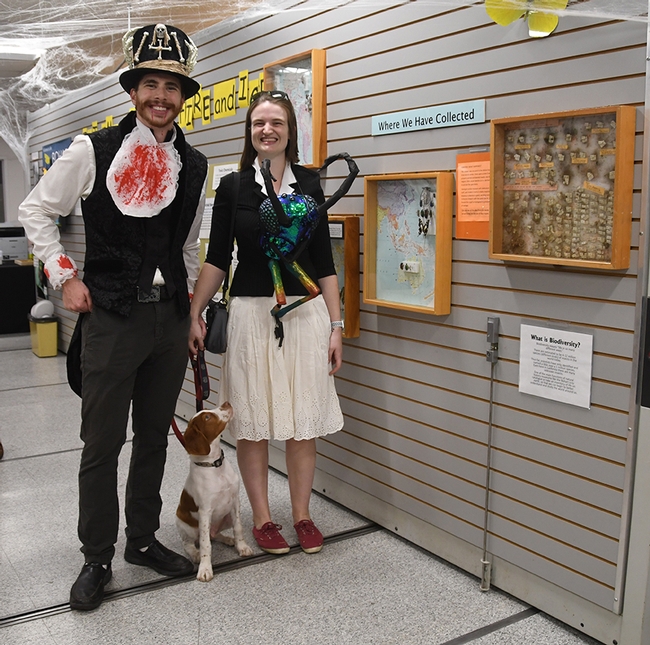 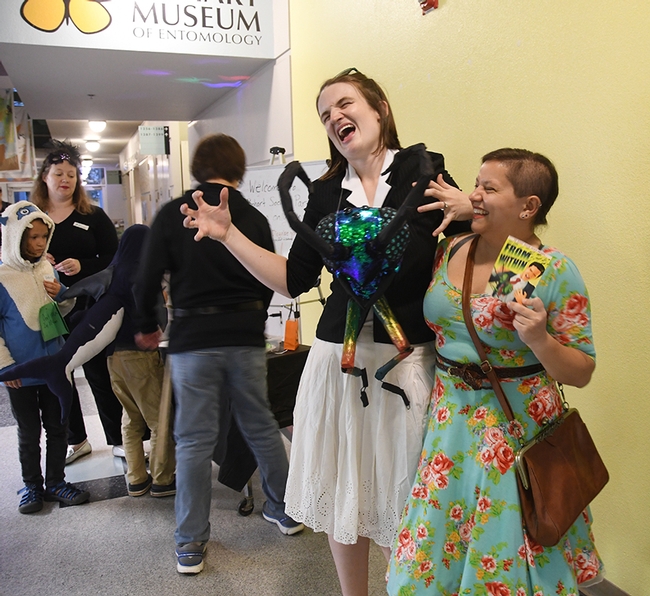 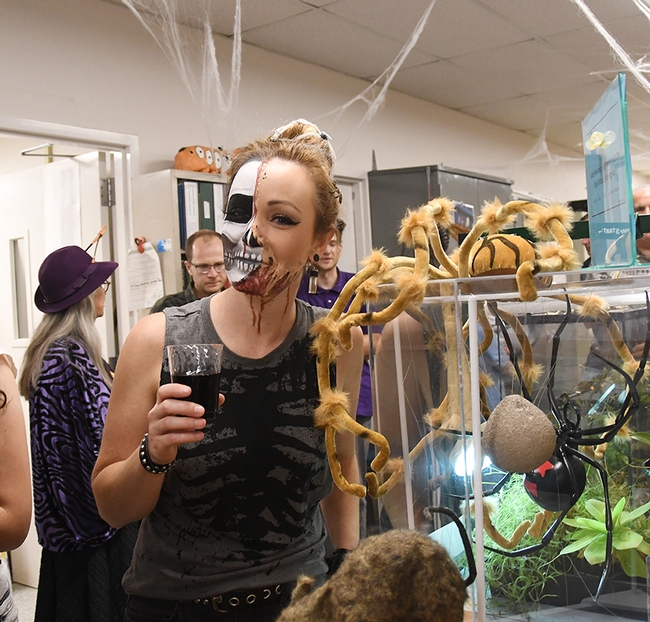 Entomology graduate Danielle Wishon said it took her four hours to do this make-up. (Photo by Kathy Keatley Garvey) 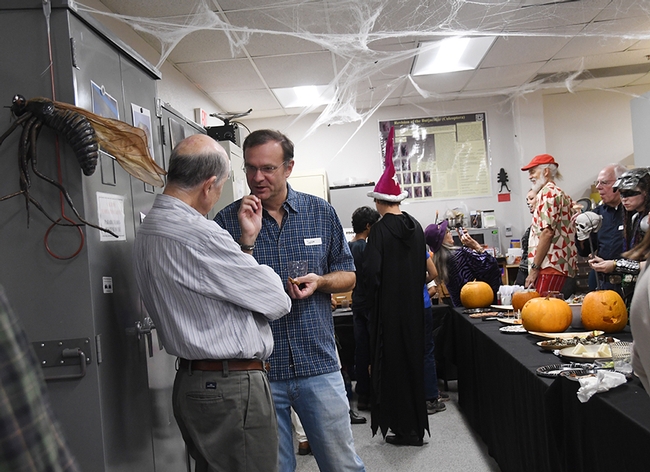 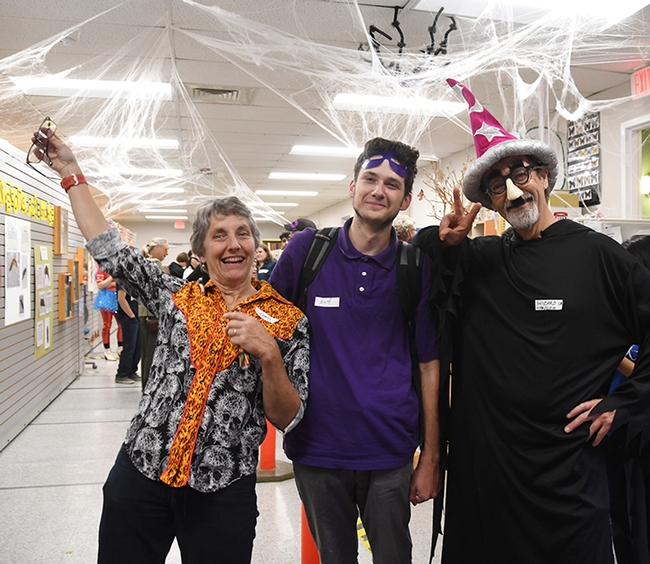 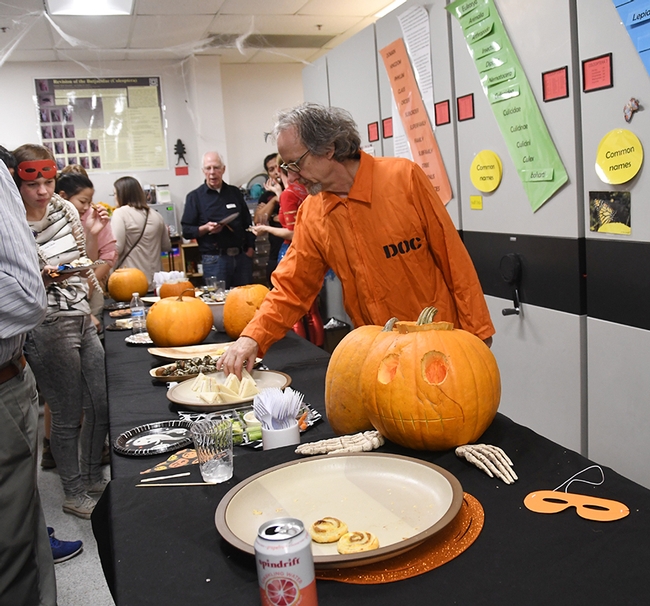 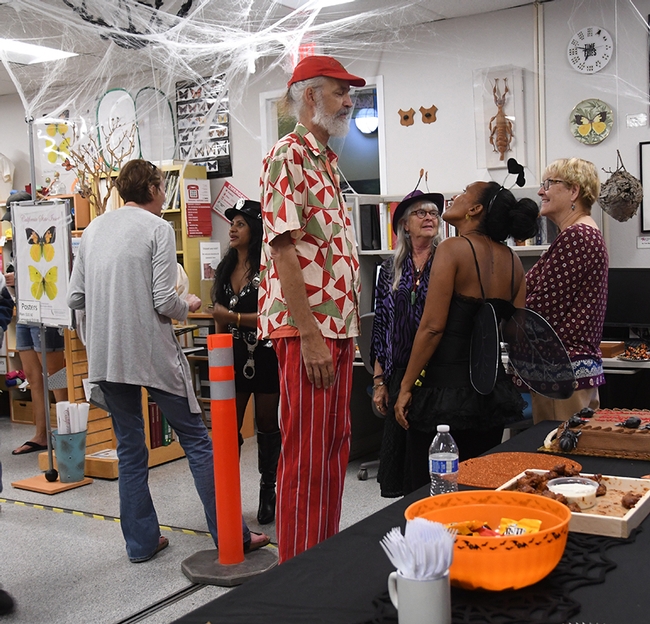 UC Davis evolutionary ecologist Scott Carroll, at 6'11", towered over everyone. Next to him (in back) is his wife, entomologist Jenella Loye. (Photo by Kathy Keatley Garvey) 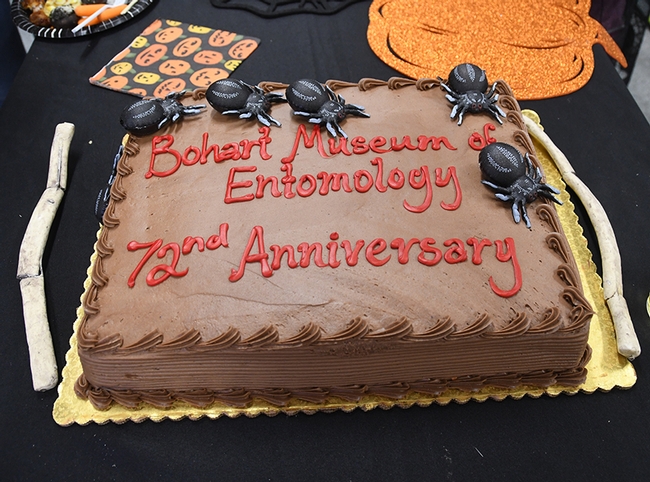 What's a cake without bugs? This is a close-up of the Bohart Museum of Entomology's 72nd anniversary cake. (Photo by Kathy Keatley Garvey) 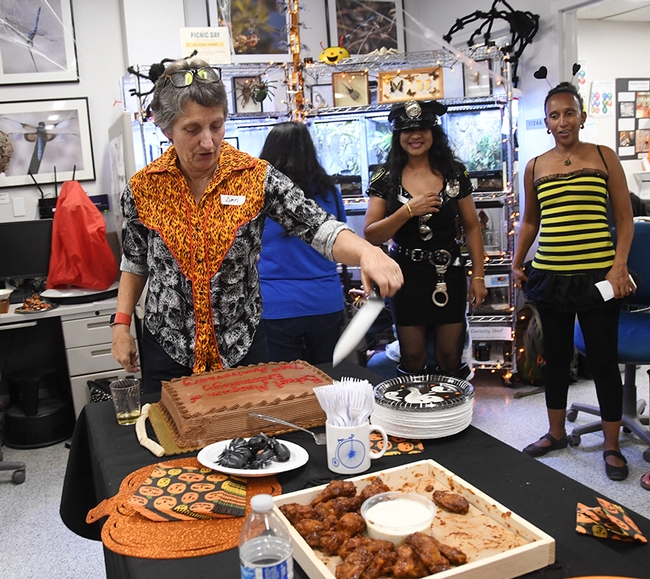 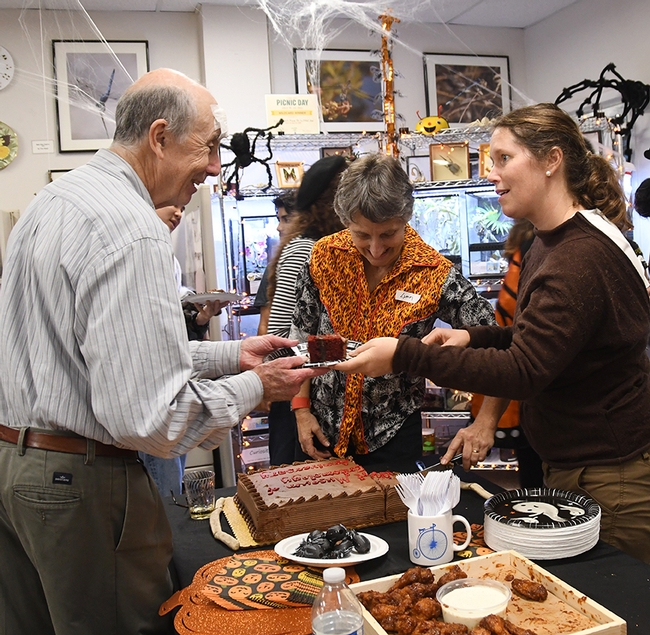