With the annual Master Gardener's Wreath Making Workshop coming up on December 1, 2018 (see the flyer below), I thought it might be interesting to look into the history of wreaths.  What I discovered were two different histories of the wreath.

The first history dates the wreath back to the 8th century BC.  In ancient times wreaths made from laurel, ivy, olive leaves, oak, wheat, and vines were worn as crowns by Etruscan rulers.  In ancient Rome and Greece, wreaths were used to represent a person's status or accomplishments.  Roman magistrates and leaders wore golden wreaths to demonstrate their lineage back to Rome's early Etruscan rulers.

Wreaths made of different plants had different meanings.  For example, according to mythology, Zeus made decisions while resting in an oak grove, so wreaths made of oak symbolize wisdom.  Laurel wreaths are often associated with love because according to Ovid's Metamorphosis, the target of Apollo's love, the nymph Daphne escaped his pursuit by being transformed into a laurel tree.  Since he couldn't have her, he cut off a branch and proclaimed that since he could not have her, he would always wear her on his hair.  So he's often depicted wearing a laurel wreath as a symbol of his love for Daphne.

The ancient Greeks are also credited with introducing wreaths made of bay laurel (native to the Mediterranean region) as a symbolic award to victors of military, music, poetry and athletic competitions.  Because wild olive trees grew in Olympia where the Olympic Games were held, olive wreaths were awarded to victors of athletic games.

The other history of wreaths dates back to 1000 BC.  It's believed that Pagans created the wreaths as part of the solstice celebration as a symbol of perseverance through a harsh winter and hope for the coming spring.  It's theorized that in the 16th century Lutherans, Protestants, and Catholics in Germany adopted the wreath to celebrate Advent.  Advent wreaths have four white candles, with a candle in the center, which is lit on Christmas Day.  Advent and Christmas wreaths are made of evergreens as a symbol of growth and eternal life.  Wreaths made of holly branches are symbolic of the crown of thorns Jesus wore when he was crucified, and the red berries represent the blood he shed for us.

If you are interested in making a wreath for the holidays, consider registering for the Wreath Workshop on December 1st.  The Master Gardeners will provide you with instruction on making a wreath, and all the supplies (frame, evergreens and other decorations) needed to make a wreath.  See the flyer below for registration information. 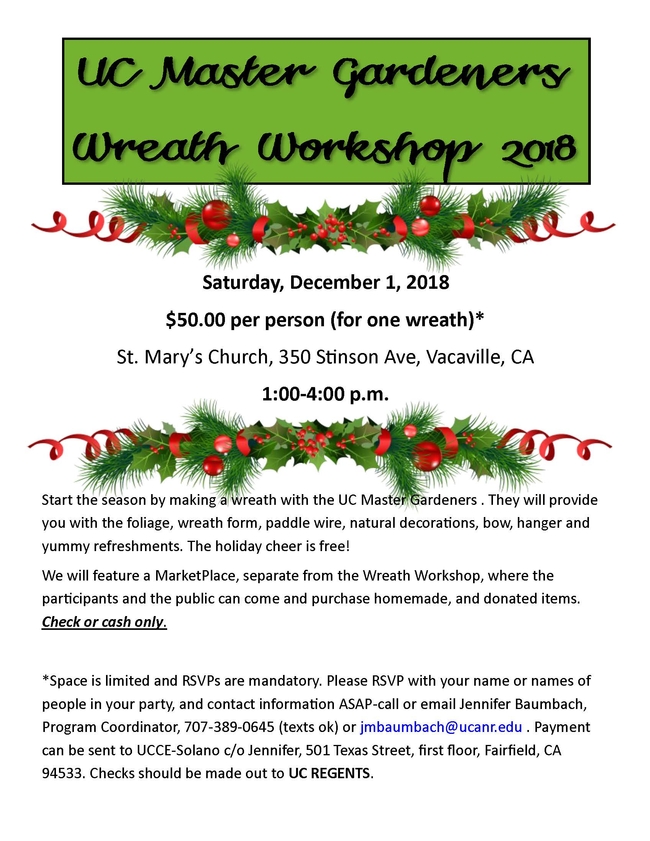