Hairy fleabane (also called asthma weed and flax-leaf fleabane)is an annual (sometimes biennial) herb that is not native to California. According to the USDA's PLANTS database (https://plants.usda.gov), the species can be found in California, Arizona, Nevada, Oregon, and Washington, and across the southern US to as far north as Virginia. Biotypes of fleabane can emerge fall through spring with the earlier emerging plants over-wintering as rosettes. Leaves are a grey-green in color, hairy, and are arranged alternate to each other up them stem. While the first leaves produced are roughly oval- to spatula-shaped, later leaves tend to be more linear with entire to weakly-toothed margins. Leaves of hairy fleabane are also twisted, crinkled or wavy in appearance. At bolting, hairy fleabane produces a many branched stem (0.5 to 3 feet [0.15 to 0.9 m] in height) upon which numerous cream- to yellow-colored, urn-shaped flowers are held. Lateral branches can be longer in length than the main stem. Flowering occurs, predominantly, mid-summer through fall. The resultant seedheads resemble those of dandelions, although they are much smaller in size (0.2 to 0.3 inches [5 to 7 cm] in diameter). Individual seeds possess a pappus (0.12 to 0.16 inches [3 to 4 mm] in length) on one end that facilitates wind-dispersal. Hairy fleabane plants produce taproots along with fibrous lateral roots. Hairy fleabane populations with resistance to glyphosate and with resistance to both glyphosate and paraquat have been confirmed in California. Horseweed, also known as marestail,is an annual (sometimes biennial) herb that is native to California and most other parts of North America. According to the USDA's PLANTS database, the species has been found in all 50 states and most of Canada. The pattern of horseweed germination and emergence is like that of hairy fleabane, were seedlings can emerge from the fall through early spring. At the seedling stage of development, horseweed and hairy fleabane resemble each other, morphologically; differences become more apparent past the 12 to 15 leaf stage. Not unlike hairy fleabane, horseweed leaves are alternate and are arranged in a rosette; however, horseweed leaves are typically a darker shade of green, as compared to fleabane. Upon bolting, plants send up a single, erect stem that can reach heights of 10 feet (3 m). Unlike hairy fleabane, lateral branches are shorter than the main branch. Cream- to yellow-colored, urn-shaped flowers are produced in dense panicles from mid-summer to fall. Like hairy fleabane, horseweed produces seeds that possess a pappus (0.10 to 0.12 inches [2.5 to 3 mm] in length) that facilitates wind dispersal. Whereas single hairy fleabane plants have been estimated to produce up to 20,000 seeds per plant, horseweed plants can produce more than 200,000. Horseweed plants produce taproots along with fibrous lateral roots. Horseweed populations with resistance to glyphosate and with resistance to both glyphosate and paraquat have been confirmed in California. Prickly lettuce is not native to North America but has become naturalized throughout the US and Canada. The species is classified as a winter and summer annual and sometimes a biennial. The first leaves are football-shaped; later leaves are elongated and club-shaped with weakly-toothed margins. The midrib vein is pronounced and covered with a row of prominent spines on the underside. Plants exist as a basal rosette (with alternating leaves) before sending up a single flower stalk that can reach heights of 6.5 feet (2 m). The stems are covered with stiff hairs that give them a spiny appearance and are branched at the terminal apex. Leaves that form on this stem can be deeply- and pinnately-lobed with rounded indentations; leaf bases are clasping. Stems and leaves exude a milky sap when cut or broken. Flowers (0.3 to 0.4 inches [8 to 10 mm] in diameter) are pale yellow; flowering occurs, typically, from April to October. Like other members of the Asteraceae, prickly lettuce seeds possess pappuses (0.16 to 0.2 (4 to 5 mm) in length) that facilitate wind dispersal. Plants produce deep tap roots with fibrous lateral roots. 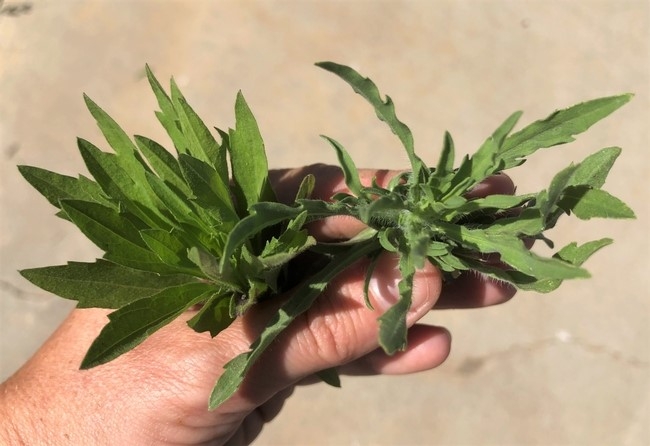 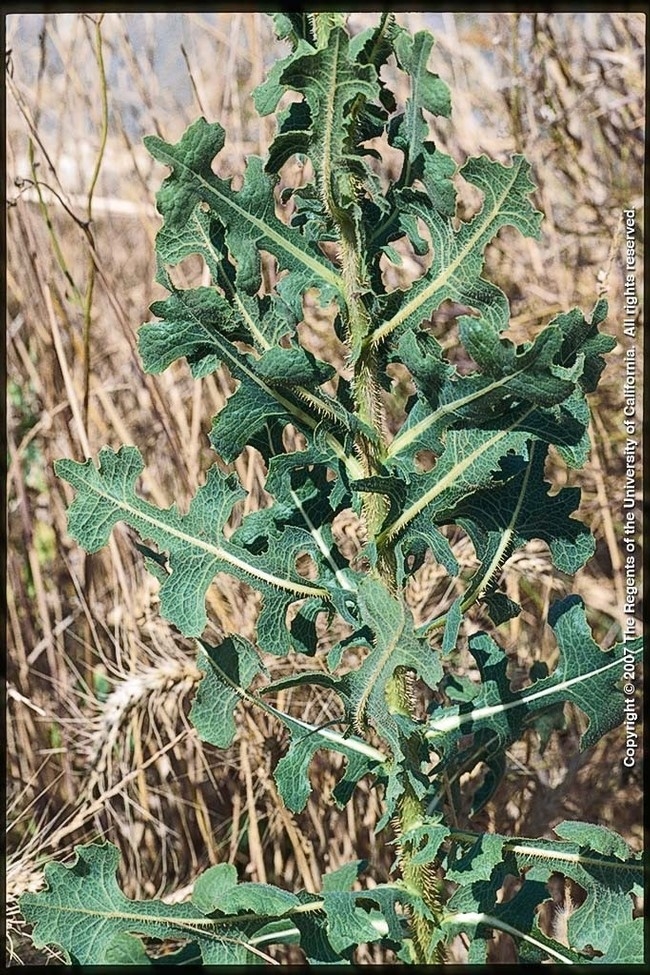 Comments: 2
Comments:
by Marianne Whitehead
on January 9, 2019 at 3:03 PM
Great information! I have been trying to identify Asteraceae weeds while scouting for insects so this is very helpful.
by Linda G Haque
on January 14, 2019 at 11:08 AM
Helpful article. UCANR Publications has a January only special on their Weed ID book!
Login to leave a comment.