Weeds compete with crops for light, water, and nutrients, which can result in yield reductions. Weeds can also interfere with crop production by serving as alternate hosts for pests and pathogens, providing habitat for rodents, and impeding harvest operations, among other impacts. Natural areas can also be impacted by weed species when they reduce aesthetics and disrupt ecosystem services. As a consequence, growers and land managers employ a variety of control strategies, including the application of herbicides, to manage unwanted vegetation.

Although herbicides can be effective tools for controlling undesirable plants, failures can and do occur. Weeds may escape chemical treatments for several reasons including: the selection of an ineffective herbicide or herbicide rate, improperly calibrated or malfunctioning equipment, applications made at a time when the target species is not susceptible to control, the use of herbicides under adverse environmental conditions, and the evolution of herbicide resistance.

As of 3 January 2019, there are 496 confirmed cases (species x site of action) of herbicide resistance, worldwide. Current reports provided by the International Survey of Herbicide Resistant Weeds (www.weedscience.org) indicate that 255 different species (148 dicots and 107 monocots) have evolved resistance to 163 different herbicides across 23 of 26 known sites of action. With respect to the United States, 161 unique instances of resistance have been documented. Most resistances (52 cases) are to the acetolactate synthase (ALS) inhibitors followed by the photosystem II (PS II) inhibitors (26 cases), 5-enol-pyruvyl-shikimate-3-phosphate synthase (EPSPS) inhibitors (17 cases), and the acetyl-CoA carboxylase (ACCase) inhibitors (15 cases).

Currently, in California, there are 30 confirmed occurrences of herbicide resistance. Twenty-four of those cases are to a single site of action (Table 1). The most frequently encountered resistances have been to the ALS and EPSPS inhibitors (7 each). Five weed species (late watergrass (Echinochloa oryzicola), barnyardgrass (Echinochloa crus-galli ssp. crus-galli), hairy fleabane (Conyza bonariensis), horseweed (Conyza canadensis), and Italian ryegrass (Lolium perenne ssp. multiflorum)) have populations with documented resistance to up to four herbicide sites of action (Table 2).

Growers and land managers can take several actions to thwart the evolution and spread of herbicide resistant weeds. First and foremost is scouting fields following herbicide applications and keeping careful records of herbicide performance to quickly identify repeated instances of weed control failure. Pesticide applicators should ensure that their equipment is properly calibrated and that they are applying effective herbicides at appropriate rates to manage the target species. Whenever possible, diversify herbicides to reduce chemical selection pressure. If appropriate, incorporate physical and cultural weed control practices into a vegetation management plan. Be sure to control unwanted plants when they are small and never allow escapes to set seed. Clean equipment to prevent seeds of herbicide-resistant weed species from moving between infested and non-infested sites and don't forget that unmanaged roadsides, canal banks, fence lines, and field margins, etc., can serve as a source of propagules.

Table 1. A summary of herbicide resistance in California to single sites of action. 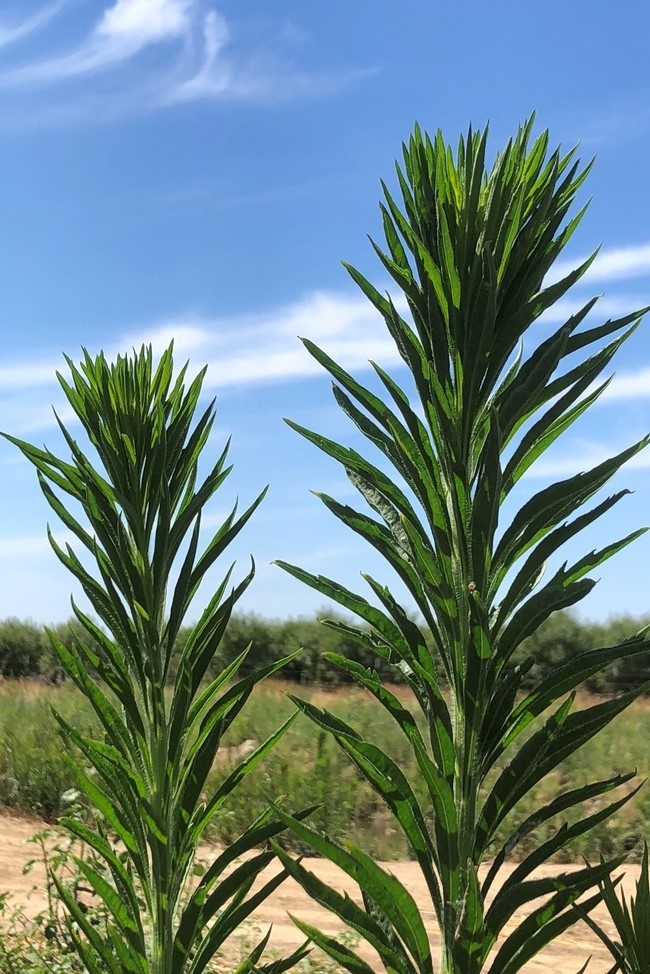