Secretary of State Hillary Clinton acknowledged the contribution of UC research in combating world hunger in a speech yesterday honoring the winners of the 2010 World Food Prize.

The president of Bread for the World, David Beckmann, and president of Heifer International, Jo Luck, were honored by the State Department for expanding their grassroots organizations and bringing help to the world's hungry.

Bread for the World is a Christian advocacy organization that presses lawmakers to support anti-hunger policies. Heifer International brings food and income producing animals to extremely poor families around the globe.

In her presentation, titled "Remove the Barriers, Remove the Fear of Sharing," Clinton recounted a litany of work by U.S. scientists to feed the world.

"In South and Southeast Asia, we’re seeing good research being done on rice, and with our support, research at UC-Davis and the International Rice Research Institute are developing strains of rice that thrive even when they have been submerged in water," Clinton said, according to the speech text published on the State Department website.

Clinton noted that the federal government supports agricultural research and extension with funding to benefit farmers and consumers worldwide.

"Some of this is not expensive, like no-till farming, which has been adopted by thousands of farmers in Asia with help from the United States. And there is so much that we can do in conveying information about what works as well as investing in new answers," Clinton said. 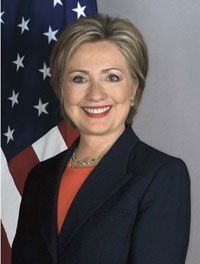