It's not an “ordinary” bee suit. And what he does is not “ordinary.”

Norman Gary, a retired University of California, Davis entomology professor, wears his bees—thousands of them.

And that suits him just fine. To him, bees are not only a science (study of apiculture), but an adventure.

A crew from England filmed Gary in mid-May at the Harry H. Laidlaw Jr. Honey Bee Research Facility, at Rick Schubert's Bee Happy Apiaries in Vacaville-Winters and then in a UC Davis open field where the 75,000 bees clustered his entire body.

“That's about 20 pounds, depending upon how much honey or sugar syrup they have consumed,” Gary said. “A hungry bee weighs approximately 90 mg and within a minute of active ingestion she can increase her weight to 150 mgs!”

Norman Gary knows bees. And he knows their behavior.

As a beekeeper, he's kept bees for 62 years and as a researcher, he's studied them for more than three decades. He's published more 100 peer-reviewed scientific papers and four book chapters.

But he is also a bee wrangler. He trains bees to perform action scenes in movies, television shows and commercials. His credits over the last 35 years include 18 films, including “Fried Green Tomatoes”; more than 70 television shows, including the Johnny Carson and Jay Leno shows; six commercials, and hundreds of live Thriller Bee Shows in the Western states.

Gary estimates he has performed the bee cluster stunt at least 500 times over the past 35 years. He remembers 54 performances at the California State Fair alone.

The History Channel episode may be his last professionally staged bee-cluster stunt, he said. However, he will continue to serve as a bee consultant to video producers and has just written a beginning beekeeping book, “The Honey Bee Hobbyist,” to be published in early December by Bow Tie Press.

“Bees are trainable, if you ask them to perform behaviors that are in their natural behavioral repertoire,” Gary said.

For the shoot, Gary borrowed New World Carniolan bees from Schubert, whose bee stock originated with bee breeder-geneticist Susan Cobey of the Laidlaw facility. “Bees are not inclined to sting if they are well fed—happy and content—and are ‘under the influence' of powerful synthetic queen bee odors—pheromones—which tend to pacify them,” Gary said.


Bees are attracted to pheromones and cluster on drops of pheromones he places on himself. While at UC Davis, he formulated a pheromone solution that is very effective in controlling bee behavior.

“Bees wrangled by this procedure have no inclination to sting,” he said. “Stinging behavior occurs naturally near the hive in defense of the entire colony not for the individual bee, because it dies within hours after stinging. Using this approach I have has as many as a million bees clustered on six people simultaneously “

Gary once trained bees to fly into his mouth to collect food from a small sponge saturated with his patented artificial nectar. He holds the Guinness World record (109 bees inside his closed mouth for 10 seconds) for the stunt.

“Most people fear bees,” Gary acknowledged. “They think bees ‘want' to sting them. Wrong! They sting only when the nest or colony is attacked or disturbed or when they are trapped in a physical situation where they are crushed.”

Sometimes, with the heavy weight of the bees on his body, he'll receive one or two stings per cluster stunt. Sometimes none.

Gary, who began hobby beekeeping at age 15 in Florida, went on to earn a doctorate in apiculture at Cornell University in 1959. During his career, he has worn many hats, including hobby beekeeper, commercial beekeeper, deputy apiary inspector in New York, honey bee research scientist and entomology professor, adult beekeeping education teacher, and author.

Known internationally for his bee research, Gary was the first to document reproductive behavior of honey bees on film and the first to discover queen bee sex attractant pheromones. He invented a magnetic retrieval capture/recapture system for studying the foraging activities of bees, documenting the distribution and flight range in the field. His other studies revolved around honey bee pollination of agricultural crops, stinging and defensive behavior, and the effects of pesticides on foraging activities, among dozens of others.

Today his life centers around music and bees. He has played music professionally for more than 50 years and for nine years has led a Dixieland band, appropriately known as the Beez Kneez Jazz Band, recording two CDs. He has performed more than 30 years in the Sacramento Jazz Jubilee, the world's largest jazz festival.

His instruments include the “B-flat clarinet,” which he plays when he's covered with bees. 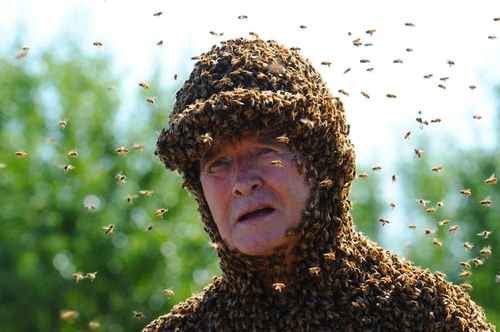 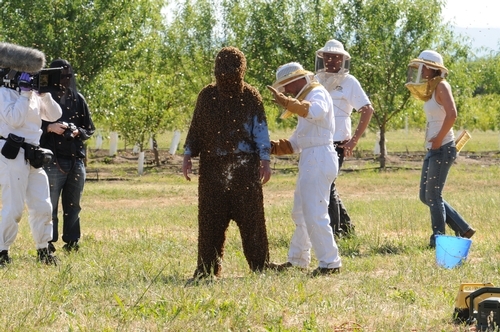 The crew helps him suit up. (Photo by Kathy Keatley Garvey) 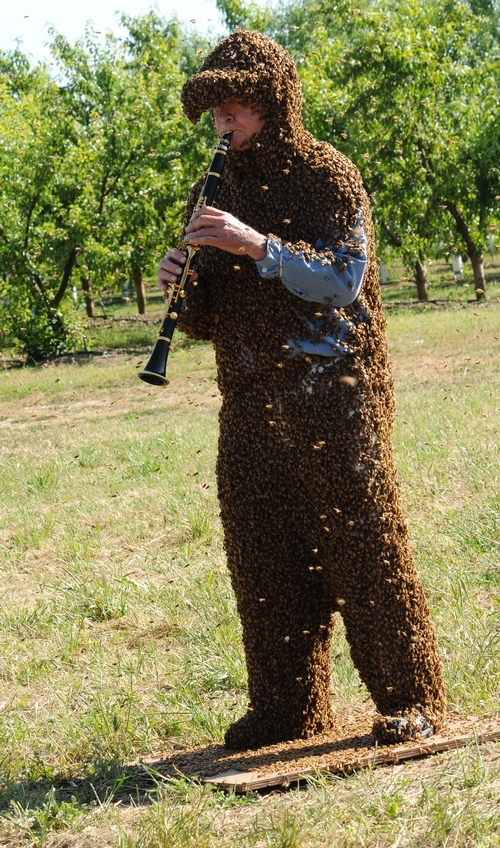