Mushrooms that Trevor Fowles has been growing on the insect frass. "Basically, I am using the insect-manure as a substrate amendment for increased oyster mushroom yields," he said. (Photo by Trevor Fowles)
Imagine food production without waste…

Insects, such as darkling beetles and black soldier flies, can and should be bred to convert organic agricultural waste into usable products--like animal feed, pharmaceutical products, and biofuel, say UC Davis agricultural entomologist Christian Nansen, an associate professor in the Department of Entomology and Nematology and doctoral student Trevor M Fowles of the Nansen lab.

Fowles was recently awarded a grant from the California Department of Food and Agriculture (CDFA) to develop lines of insects for bioconversion of agricultural waste.

“In the 21st Century, we will be breeding insects for their ability to effectively convert agricultural organic waste, and researchers at UC Davis are leading the effort,” Nansen says.

Nansen will be among those speaking at a two-day workshop on “Aligning the Food System for Food Safety in Food Waste Systems,” set May 15-16 in the UC Davis Conference Center and the Walter A. Buehler Alumni Center.  Nansen will be part of a panel discussion from 1:30 to 3:35 p.m., Thursday in the Alumni Center on “Composing and Anaerobic Digestion for Nutrient Recycling.” He joins fellow panelists Jenny Stephenson, environmental protection specialist with the U.S. Environmental Protection Agency (EPA), Steve Zacari, director of engineering and research and development, California State Soil; and Robert Horowitz, supervisor, Organic Materials and Construction and Demolition Unit, CalRecycle.

As part of his PhD project, Fowles applies the concepts of livestock breeding to insects “so that specially adapted lines of insects can be developed and commercialized to manage economically important agricultural organic wastes, such as, skins and stems from wine production and from tomato processing. As the human population continues to grow, so, too, do the concerns regarding the sustainability of waste management from our food production systems. In the U.S. alone, we generate 145-602 gigatons of organic waste annually-- or about nine pounds per day per person! Disposal of these wastes in compost and landfilling operations generates greenhouse gases and other environmental pollutants.” Trevor Fowles, doctoral student in the Christian Nansen lab. (Photo by Kathy Keatley Garvey)
Fowles and Nansen noted that California law, effective Jan. 1, 2020 (Assembly Bill 1826) prohibits pre-consumer organic wastes from entering the landfills. “Therefore, developing innovative ways to use pre-consumer organic wastes is important, and an economic opportunity. When waste management is tied to the mass-cultivation of insects, we can get rid of agricultural waste and at the same time produce insects that can be turned into animal feed, biofuel, or used as input in pharmaceutical productions! And the leftover from insect mass-cultivation can be used to grow edible mushrooms.”

Fowles and Nansen recently co-authored a paper, "Artificial Selection of Insects to Bioconvert Pre-Consumer Organic Wastes. A Review" in the journal, Agronomy for Sustainable Development (https://link.springer.com/article/10.1007/s13593-019-0577-z).

“The potential for using insects to consume organic waste materials and convert them into feed for animal, biofuels, and other valuable secondary products is gaining momentum as both a research discipline and as a business opportunity,” they wrote in their abstract. They described insects as the ideal bioconverters, as “insects uniquely equipped to convert wastes into biomass and other valuable secondary products, and we present the current knowledge and existing research gaps towards the development of such organisms. We conclude that (1) targeted breeding of insects and their gut microbes can produce tailored insect lineages for bioconversion of specific waste streams; (2) research is needed to take full advantage of the existing insect diversity to identify new candidate species for bioconversion; and (3) further research into insect-gut microbial complexes will likely provide important insight into ways insects can be used as sustainable bioconverters of highly specialized waste streams.”

Currently, only a few insect species are used for bioconversion of organic wastes. They include crickets, locusts, black soldier flies, green bottle flies an several species of mealworms.

In addition to funding from CDFA, Fowles has also secured an EPA grant for his research,  “Beetle Larvae as Biodegraders of Styrofoam and Organic Waste,” involving darkling beetles, Tenebrio molitor. In the wild, darkling beetles and larvae are general decomposers, eating decaying leaves, sticks, grasses, and carcasses, but the larvae are also known to eat polystyrene or plastic foam, commonly known as Styrofoam. They can decompose as much as three-fourths of a pound of Styrofoam within a three-week period, Fowles says. After biodegrading the Styrofoam, the beetles can be pelletized for animal feed, and the excrement or frass can be used as “high-value amendment to compost mixtures.”

(News media: you're invited to contact the Nansen lab to see the mass rearing processes and breeding. E-mail Christian Nansen at chrnansen@ucdavis.edu or call the lab at (530)-752-2954.) 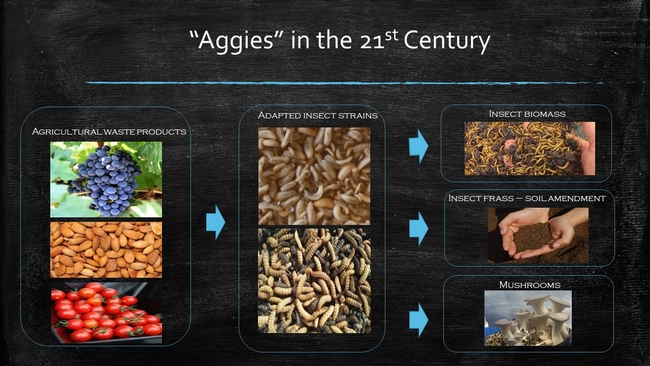 Doctoral student Trevor Fowles and major professor Christian Nansen are breeding insects to convert agricultural waste into usable products: 1) insect biomass, that can be fed to animals as a feed additive, used by the pharmaceutical industry, or used to produce biofuel, 2) insect frass and fragments from the bioconversion process can be used as soil amendment in high-value cropping systems, and 3) mushrooms can be grown on what the insects are unable to bioconvert. 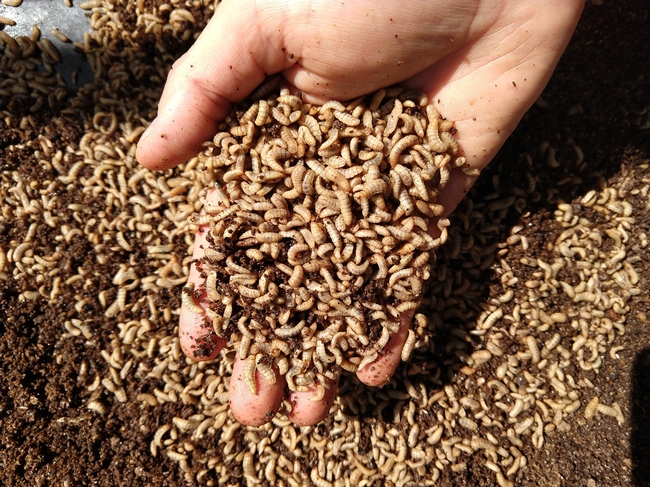 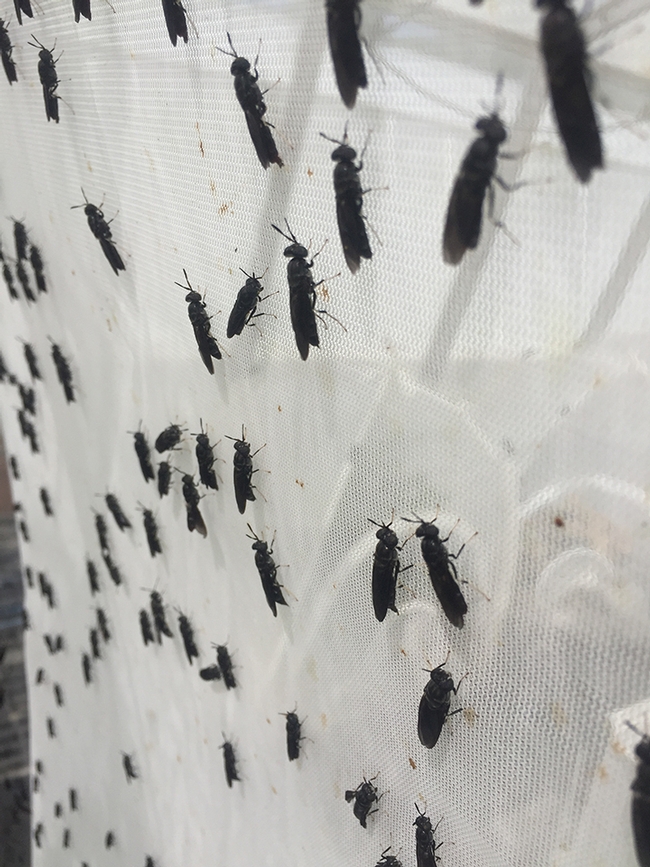 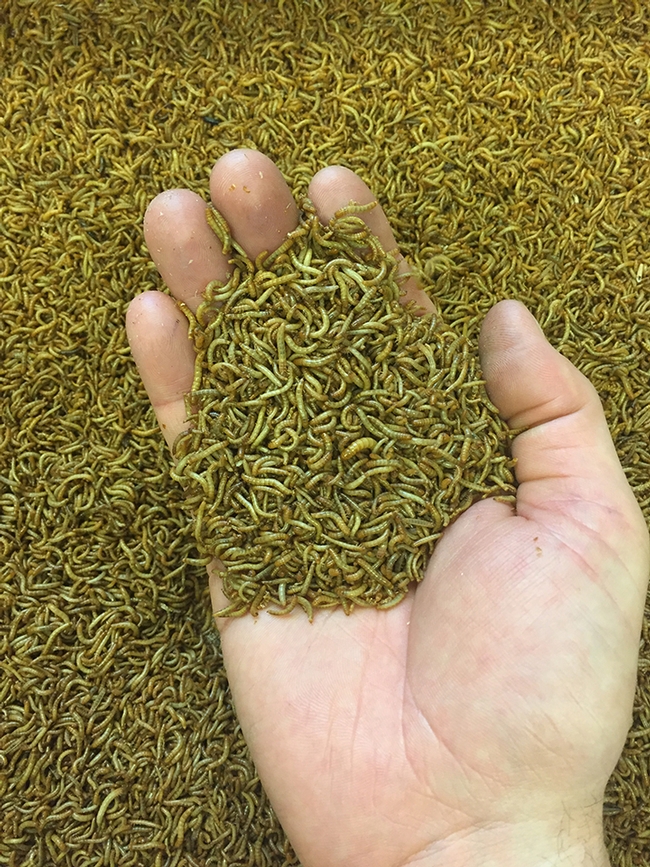