Yeech! Who threw up in my front yard? A gooey flat yellow blob of something lay on the ground in front of my house. Hmm, it didn't seem to smell but what was it and who got sick?  I scraped it up and immediately threw it in the garbage bin. But two days later another yellow mass appeared in a different area, and another and another.  Okay I said to myself it's obviously not vomit so maybe it's something else and it's probably organic.  The areas the yellow blobs appeared to be growing were on wood mulch chips. “Maybe it's a fungus that likes to digest wood chips,” I thought to myself because I had seen different mushrooms on the wood chips. Upon further detective work, I discovered it was the aethalium phase of a slime mold. A slime mold what's a slime mold? Slime mold, Fuligo septica is neither a plant nor an animal.  It belongs to the kingdom of Protoctista (Protista). They are more closely related to Amoebas and certain seaweeds than fungi.

The slime mold was feeding off the fungus and bacteria in the soil which in turn were decomposing the copious amounts of wood chips.  It was Nature's recycling project at work! They are relatively harmless and pose no threats to plants, pets, and people. It can appear anytime from late Spring to Fall. It thrives in moisture and heat environments. Slime mold can be in other colors, such as orange or blue but rarely green, than dog vomit yellow.

It lives in the soil as a single cell organism. When food is scarce It combines with other cells to look for food forming a plasmodium.  It moves like a giant amoeba. For not having a brain, slime molds are extremely efficient in finding food. “Starving amoebas work in tandem, signaling to each other to join and form a multicellular mass, like a moving sausage,” says Frederick Spiegel, a biology professor at the University of Arkansas and an expert on slime molds. Type in: “slime mold moving” on Google to get fascinating videos of the plasmodium in action.

According to Susan Mahr of the University of Wisconsin- Master Gardener Program the plasmodium (a transparent egg white color) “changes into an aethalium, a thickened, cushion-like, irregularly shaped structure containing numerous spores.”  The next morning the yellow dog vomit appears on the wood chips. The aethalium structure may last a day or two but then as it dries out it appears brown and crusty. Several days later the dried up aethalium broke up and upon touching and released its spores, thus completing the cycle of life: “Grow, thrive, reach maturity, reproduce, and die.”

Slime molds may look abhorrent but they are harmless. If you appreciate nature and the recycling of nutrients back into the soil, leave them alone. Slime molds are free you don't have to buy them. Save money by not buying extra fertilizer.  Establish a healthy cycle of decomposers in your soil. 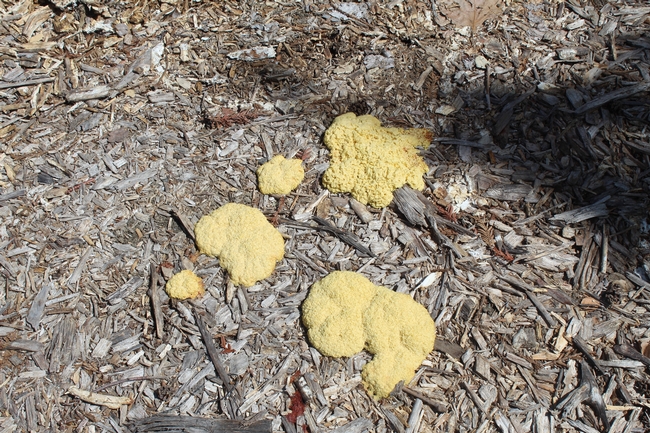 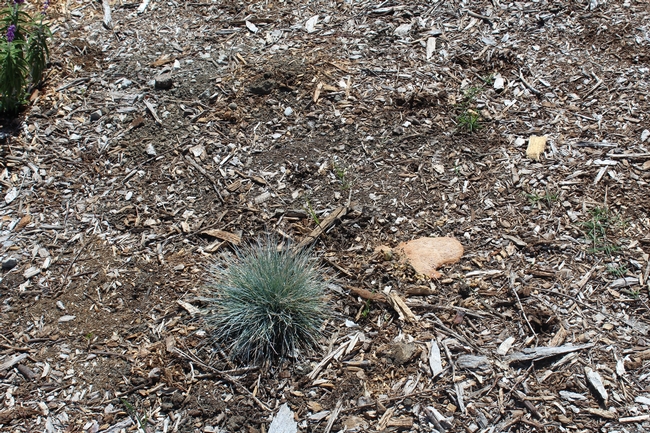 Comments: 8
Comments:
by Kathy Klobas
on June 21, 2019 at 10:51 AM
I found some a few years ago and had the same thought—ugh! After researching it, I left it to decompose, but I occasionally see a patch in the same flower bed!
by Ellen Zagory
on June 21, 2019 at 4:58 PM
I love this post! You had me at dog vomit. I have always wanted to know what the heck it was.
by Gris Espino
on June 22, 2019 at 6:15 PM
Great to know. Thanks for sharing.
by Christine Spera
on September 22, 2019 at 1:21 PM
Ahhhh...so that's what it is!!! Thanks for sharing all that information. You answered everything I wanted to know!!!
by Angel
on January 7, 2020 at 1:33 AM
They look like a poop of the canine, the texture, and the color of it. Maybe I encountered this before, thinking that it was a feces of my fur babies it doesn't smell bad anyway, but I need to throw it as I don't want my canines to eat or even sniff it. I had gained another information from your article Brenda and thank you for sharing this with us.
by Omakemeasandwich
on July 29, 2020 at 3:10 PM
Now I feel bad I thought it was dog puke also and scraped into a bag being careful not to get any on me, then threw it in the trash. Really thinking about all the different pieces coming together for this big attempt to save their species and then I come along and scrap them all up and throw them in the trash.i wonder if their plotting revenge now. Maybe I should go apologize?
by Robert J Nowell
on July 19, 2021 at 5:02 PM
Does this stuff "bleed" when touched or disturbed?
by Brenda
on July 23, 2021 at 5:22 PM
The vomit doesn't bleed it will spore out if disturbed. If you look at it closely you can actually see it pulsate. It's a remarkable organism in that it finds its food by the shortest path. It devotes it energy to the shortest path. There was a Nature program on KQED on this entity. -Brenda
Leave a Reply: