Thousand cankers disease is killing a giant black walnut tree, estimated to be 150 years old, on the 100 block of E Street, Davis. (Photo by Kathy Keatley Garvey)
The deadly thousand cankers disease, an emerging insect-fungus complex, has caused profound damage to black walnut trees not only in urban areas of California and other western states, but in Pennsylvania, Tennessee and Virginia, according to a newly published review by UC Davis-affiliated scientists and their colleagues.

Between 2005 and 2016, the disease killed nearly 60 percent of the 210 specimens of southern California black walnut mature trees in the USDA Agricultural Research Service's National Clonal Germplasm Repository Juglans Collection near Winters, Seybold said. “This is only an estimate and the true proportion of the mortality is likely much higher, as only six of the 210 trees were rated as having healthy crowns in August 2016." The walnut twig beetle is about the size of half a grain of rice. (Photo by Kathy Keatley Garvey)
“The walnut twig beetle is a significant pest of very large trees because it sequentially attacks the small branches--though ironically not the twigs--all the way down the trunk to the soil line,” said Seybold, a pioneering scientist of the thousand cankers disease (TCD), who first found TCD evidence in Davis in 2008. “Most bark beetle species are not this thorough in using all of the phloem tissue in their plant hosts. In Davis right now, in the courtyard next to Sophia's Thai Restaurant, 129 E St, the tiny beetle is gradually killing the largest northern California black walnut tree in the city.  It has taken nearly a decade, but the crown of the massive tree is nearly completed killed.”

Seybold estimated that the E Street tree is about 150 years old, "maybe older" and around 50 feet in height. It measures almost 65 inches--or just over five feet--in diameter.

“The walnut twig beetle is also significant because it is the consummate invasive species; it is small enough to travel under the bark of modest-sized pieces of barked wood and it can withstand relatively dry conditions that it might encounter during transit,” Seybold said. “We believe that it has moved from isolated Arizona black walnut trees along creeks and rivers in the desert Southwest to nearly the entire western USA wherever walnut trees of any species have been planted or grew naturally. It has also been transported to Europe and established significant populations in Italy.” Co-author Andrew Graves did a postdoctoral fellowship at UC Davis. Co-author Stacy Hishinuma holds a doctorate in entomology from UC Davis.
The five co-authors of the synthesis article include Stacy Hishinuma and Andrew Graves, two USDA forest entomologists with UC Davis connections. Hishinuma, who works in the Pacific Southwest Region, San Bernardino, and holds a doctorate in entomology from UC Davis, studied in the Seybold and Mary Lou Flint labs, UC Davis Department of Entomology and Nematology. Graves, who works in the Southwestern Region, Albuquerque, N.M., is a former postdoctoral fellow in the UC Davis Department of Plant Pathology.

UC Davis doctoral student Jackson Audley of the Seybold lab and  Richard Bostock lab (Plant Pathology), contributed  photos of dead and dying walnut trees in the Davis area, along with UC Davis doctoral student Corwin Parker and Hishinuma. Audley, who is researching an ensemble of behavioral chemicals that repel the walnut twig beetle from landing on English walnut trees, conducts his research in a commercial orchard near Winters. 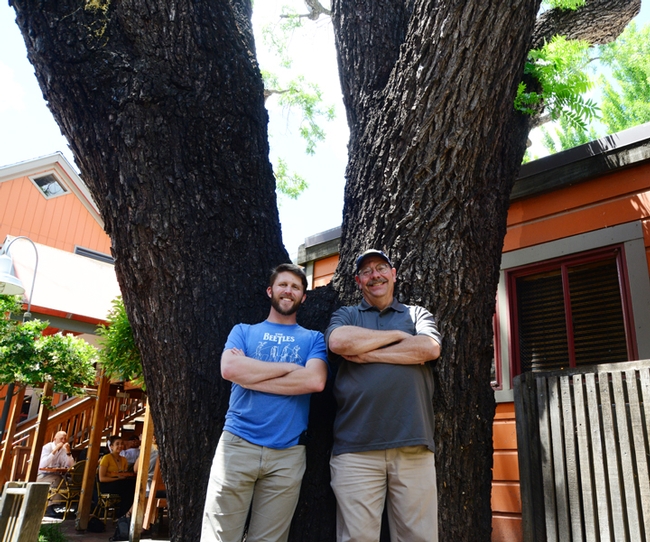 Forest entomologists Steve Seybold and Jackson Audley, his doctoral student, stand at the base of a dying giant black walnut tree on the 100 block of E Street. (Photo by Kathy Keatley Garvey 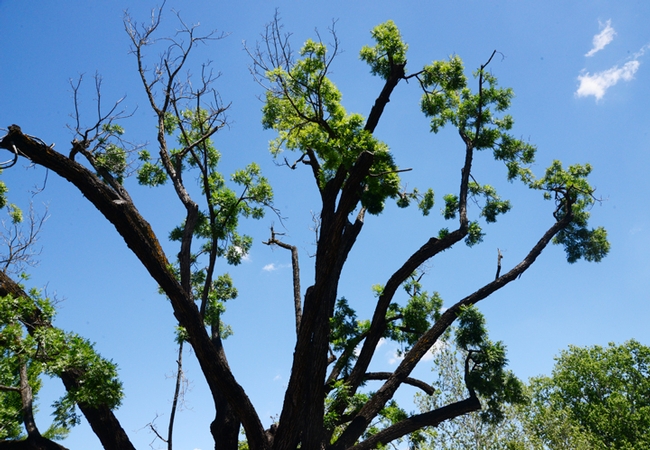 "The walnut twig beetle is a significant pest of very large trees because it sequentially attacks the small branches--though ironically not the twigs--all the way down the trunk to the soil line,” says forest entomologist Steve Seybold. This image is of a dying black walnut tree in downtown Davis. (Photo by Kathy Keatley Garvey) 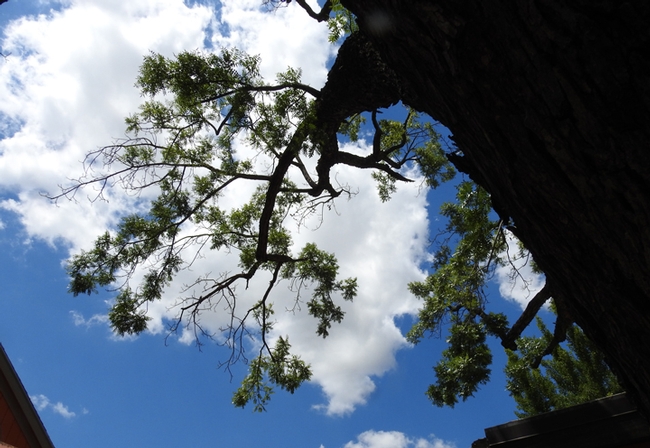