A year or so ago, I met Judith Gerber, who like me has a special interest in the history of agriculture in Los Angeles.  Judi, in addition to being one of our UC Master Gardener Volunteers, is a farm and garden writer and author of the recently released book, "Farming in Torrance and the South Bay".  Judi and I are working together to document the agricultural history of Los Angeles County, once the largest farm county in the US, and now the largest urban county.  We've been calling our project "From Cows to Concrete" and we will both be blogging about it periodically.  Here is our first piece, on the transformation of the City of Los Angeles.

By Rachel Surls and Judith Gerber

Some of the earliest observations about the place we now know as Los Angeles clearly envisioned the potential for abundant farms.  Father Juan Crespi, a member of a party of Spanish explorers, wrote in 1769 about the valley where they had made camp, “After crossing the river we entered a large vineyard of wild grapes and an infinity of rosebushes in full bloom. All the soil is black and loamy, and is capable of producing every kind of grain and fruit which may be planted. We went west, continually over good land well covered with grass.”

This agricultural potential was realized as the area was settled several years later. In 1781, "El Pueblo de la Reina de los Angeles," was founded. Over the next several decades it grew into a small farming community, with both dry-land farming, and an irrigation system of ditches, or zanjas, that fed its wheat and maize.

By 1790, Los Angeles produced more grain than most other California settlements, and by 1800, the harvest exceeded the pueblo’s local needs. By that same year, fruit orchards and vineyards were planted on a large scale.

By the 1830s, there were over 100 acres of vineyard producing wine and brandy. The community became known for its grape production, and by 1851, about 1,000 gallons of wine were shipped from Los Angeles.

The Gold Rush and the transcontinental railroads increased the demand for beef and other farm products, and sparked an influx of population into Los Angeles, further increasing demand. Los Angeles farmers responded by experimenting with other crops.

A frontiersman and entrepreneur named William Wolfskill was the first to grow oranges commercially. The first commercial orange grove in the US was on a hill in what is now downtown Los Angeles, a forerunner of what was to become the massive Southern California citrus industry.

Many people came from other parts of the country to try their hand at farming, and produced a diversity of commodities ranging from hay and grain to citrus and olives. The Los Angeles Chamber of Commerce even created a large department dedicated to attracting and advising new farmers.

The opening of the Los Angeles aqueduct in 1913 allowed further intensification of farming to higher-value irrigated crops, especially in the San Fernando Valley as many of its communities became part of the city beginning in 1915.

After World War II, suburbs and industry grew, squeezing out much of the city’s agricultural land, but farming was prominent in communities surrounding the city up until the 1960’s.  Community gardens and urban agriculture have continued in the city, and have recently become more visible and popular, catalyzing the recent passage of the ‘Food and Flowers Freedom Act” allowing small-scale commercial production of fruit and flowers in residential neighborhoods.

The city’s seal, created in 1905, contains oranges, grapes and olives, a reminder of our agricultural past, and a promise of future abundance.  Our farm heritage has relevance today, as we work to create a Los Angeles with accessible, affordable, ample food for all its residents. 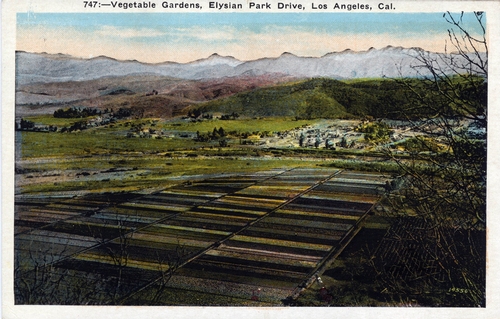