A research report released Wednesday by the UC Davis Olive Center received a tremendous amount of publicity, including articles in the Los Angeles Times, the San Francisco Chronicle and the Associated Press. Google News turned up two dozen stories.

A problem with olive oil marketed in the U.S. is that labeling lower-quality olive oil as top-end is technically legal because there are no federal rules that define "virgin" or "extra-virgin" olive oil.

The UC Davis news release said that, before this study, scientists had anecdotal reports of poor quality olive oil being sold as extra virgin.

“Now there is empirical proof," Flynn was quoted.

The LA Times story said the results of the UC Davis study were as complicated as the olive oil business itself. Some brands had samples that failed in all three geographical locations. In other cases, the same brand of oil purchased at different locations had different outcomes.

The Olive Oil Times posted a story yesterday questioning some of the new study's results. The article said that, according to the report’s appendix, the Bariani olive oil that failed the sensory testing was purchased and tested well after the “best before” date. 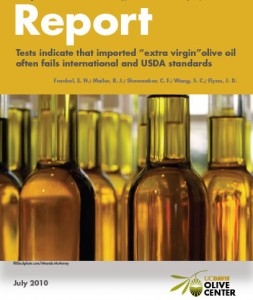