Dry Root Rot has menaced growers in Ventura County for many years. In the ‘50's and ‘60's it seemed most prevalent on older orange trees. A few years after the wet winter of 1968-69, dry root rot became an increasing problem among citrus trees of all ages. At that time, most of the damaged trees were on sweet rootstock (susceptible to Phytophthora), and growing in fine-textured soils or soils with poor drainage. A few years after another wet winter/spring (of 1983), dry root rot again reared its ugly head, but this time predominately on young lemons.

The disease is caused by the fungus, Fusarium solani. This fungus is most likely present in all citrus soils in California. It is a weak pathogen in that by itself it will not attack a healthy tree. However, experiments conducted in the early 1980's by Dr. Gary Bender, showed that when seedlings were girdled, root invasion occurred. In the field, the fungus can infect trees once gophers have girdled the roots or crown. A Phytophthora infection will also predispose trees to Fusarium, as will asphyxiation. Therefore, the mere presence of the fungus in the orchard soil will not lead to the disease.

Fusarium is a soil borne fungus that invades the root system. Once infected, the entire root will turn reddish-purple to grayish-black. This is in contrast to a Phytophthora infection which, in many cases, will attack only the feeder roots, but when larger roots are infected, only the inner bark is decayed and it does not discolor the wood. In addition, when observing the cross section of a dry root rot infected trunk, a grayishbrown discoloration in the wood tissue can be observed.

Dry root rot is a root disease, but symptoms of the root decline are seen above ground. They are similar to any of the root and crown disorders such as Phytophthora root rot, oak root rot fungus (Armillaria) and gophers. The trees lack vigor, leaves begin to turn yellow and eventually drop (especially in hot weather) causing twig dieback. Finally, the foliage will become so sparse that one will be able to see through the canopy of the tree. A period of two to three years may pass from the time of invasion until noticeable wilt. Many times, the tree will collapse in the summer, after a period of prolonged heat. In the case of dry root rot, the collapse is so rapid that the tree dies with all the leaves still on the tree. When looking for symptoms of dry root rot, keep an eye out for symptoms of other maladies as well — Phytophthora, oak root rot fungus and gophers being the most prevalent.

As mentioned previously, in order for Fusarium to infect a tree, there must be a predisposing factor such as girdling from gopher feeding. However, since many trees collapse from dry root rot without any apparent predisposing factor, there are obviously other factors which we have yet to identify. Therefore, in 1998, a grower survey was developed, along with intensive soil and leaf sampling, to attempt to identify as many new predisposing factors as possible. They might be elements in the soil, either deficiencies or excesses, or specific cultural practices such as irrigation patterns or fertilizer practices. Twenty orchards were identified from which 20 soil and 20 leaf samples were taken in diseased areas and another 20 soil and 20 leaf samples were taken from adjacent healthy areas. The owners or managers of the properties were given a questionnaire to complete regarding a variety of cultural operations. The objective was to identify those factors that would correlate well to trees becoming infected with dry root rot.

Soil analysis - The following laboratory procedures were conducted to see if there was any correlation between the disease and either deficiencies or toxicities of these elements or
conditions: sodium, boron, salt level, pH and soil type (sand, loam, clay). For these elements or conditions, no correlation was found. It would appear that for our sampling sites, these conditions, whether favorable or not (toxic or deficient), did not play a major role in predisposing the tree to dry root rot.

Leaf analysis - The following elements were analyzed for their concentration within the leaf: nitrogen, potassium, phosphate, manganese, magnesium and zinc. Of these, three correlations were found. Zinc and manganese levels were substantially higher in diseased trees. The third correlation showed a potassium deficiency in diseased trees. However, we do not believe that dry root rot is caused by elevated levels of zinc or manganese, or by potassium deficiency, but rather are a result of the disease. Unfortunately, it seems that we have still not identified any elements in leaf analysis that truly correlates and points to a predisposing factor for disease development.

Grower survey - The grower survey included questions on planting site (location, wind, previous crop, fumigation etc.), trees (source, type, rootstock, etc.), and cultural practices (irrigation, fertilization, gophers, history of Phytophthora, water quality, etc). Through statistical analysis it was found that the healthy and diseased sites were significantly different with reference to three conditions or situations: 1.) The presence of Phytophthora in an orchard will increase the chance of those trees succumbing to dry root rot. 2.) Orchards that have been fumigated have a less likely chance of succumbing to dry root rot. 3.) Balled vs. Container Plants -- growers were asked if their trees were balled or container
grown nursery plants. Healthy sites were significantly more likely to have been planted with balled trees (73% vs 33%). The results of this analysis were not strong, but rather they
suggest that there is a relationship between the disease and the type of tree planted - balled or container grown - and suggesting in favor of a balled tree for a healthy orchard.

Control Measures – What Works and What Does Not
Early experiments conducted by Menge, Ohr and Sakovich showed that the following circumstances or operations do not influence the incidence of this disease: fungicidal treatments, wounding the tap root at time of planting, sandy versus clay textured soils, spring versus fall planting and soil mounding.

Phytophthora. Publications written in the 1970's, and again noted by our survey, showed that Phytophthora is a major culprit in the dry root rot complex. To control dry root rot, it is essential that the Phytophthora, when present, be controlled. This can be accomplished by fungicidal treatments, and by the proper application and timing of irrigation water. Overwatering creates a favorable environment for the multiplication of the Phytophthora fungus.

Gophers. It is well known that gopher damage provides entry points for Fusarium. Controlling gophers is an important factor in reducing the potential of infection by Fusarium.

Hear the latest on DRR with Akif Eskalen – a Webinar, July 24 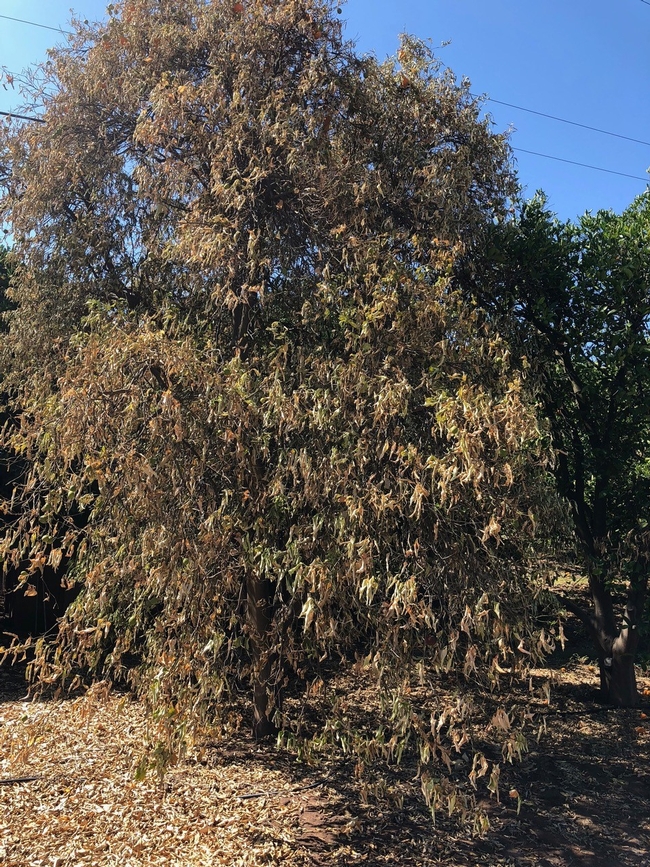