Hammock, who holds a joint appointment with the UC Davis Department of Entomology and Nematology and the UC Davis Comprehensive Cancer Society, is known for his expertise in chemistry, toxicology, biochemistry and entomology. He meshes all four sciences in his 50-year research on how environmental chemicals impact human health.

“I am thrilled to receive the RIVER award,” said Hammock, who joined the UC Davis faculty in 1980 and now devotes much of his research toward environmental health. “The National Institutes of Health has many institutes and several of them have funded my laboratory over the years.  But it is the NIEHS that most closely matches my interests.  They have supported my work since I was a graduate student, so I am particularly thrilled they have shown such high confidence in the science and work our laboratory does.  This award certainly recognizes the current and past members of the laboratory who have been so productive and innovative.”

The program provides $6 million in funding over an eight-year period “to give scientists greater intellectual and administrative freedom as well as sustained support to achieve greater scientific impact,” according to NIEHS officials. RIVER provides a select few scientists with great latitude in addressing the most pressing scientific problems.

“Professor Hammock is especially deserving of this recognition for his important research over many years,” said Helene Dillard, dean of the UC Davis College of Agricultural and Environmental Sciences. “Environmental health is central to the mission of our college, and we anticipate that this award will empower him to continue making advances in areas with the potential to impact human well-being.”

Ken Burtis, faculty advisor to the Chancellor and Provost and past Dean of Biological Sciences at UC Davis, said it would be difficult to find “a more deserving scientist to invest in than Bruce Hammock.”

“We both worked in the same building, and Bruce was one of the most hard-working, creative and enthusiastic colleagues I knew,” Burtis said. “The grant process often limits innovation.  The intellectual freedom NIEHS is providing Hammock makes our university shine and is a smart investment on the part of the agency. Their investment in him in the past paid off and RIVER will pay off even more in the future.”

When asked how the award would change his life, Hammock, a kayak enthusiast and instructor, responded: “I will give up kayaking the harder rivers, I certainly do not want to drown and have to give any of the funding back. Having been given this great freedom, it will be hard to live up to the expectations.”

Hammock, who has directed the NIEHS-UC Davis Superfund Research Program for the past 35 years, said many of his UC Davis collaborators are affiliated with the Superfund Program, including:

“Bruce had been wonderful supporting students through running a training grant and particularly bringing diverse scientists together with the NIEHS Superfund Program,” said Chiamvimonvat. “It has been such a privilege to be part of this exciting program to understand the mechanisms of environmental contaminants on human health. His pioneering work on novel targets to combat inflammation has far-reaching applications, not only in pain, but also in other diseases including cancer and cardiovascular diseases, the two most common causes of morbidity and mortality.”

Gomes explained that rather than trying to find biological markers for individual environmental chemicals, this Superfund group is working together to find universal markers of stress and disease and understand how to prevent these diseases.  ‘By stabilizing mitochondria, the endoplasmic reticulium and other cell organelles to stress,” Gomes said, “we are reducing toxicity, as well as understanding the very basis of tissue damage by commonly used drugs and pesticides and how to reverse it.”

Michael Lairmore, dean of the UC Davis School of Veterinary Medicine, said he was pleased to hear that Hammock has won the NIEHS River Award. “Bruce is very deserving of this award,” Lairmore said. “He has pioneered trans-disciplinary research across campus and has engaged faculty in multiple colleges and schools to transform the way we treat diseases in multiple species.  His creative approaches blend his natural curiosity with practical ways to translate his research findings into real world solutions to disease processes.”

“By providing research freedom through the RIVER award to Bruce Hammock, NIH made a remarkable decision,” said Scott Fishman, director of the Center for Advancing Pain Relief, Fullerton Endowed Chair in Pain Medicine, and executive vice chair of the Department of Anesthesiology and Pain Medicine for the UC Davis School of Medicine.

“For example, Bruce sought me out shortly after I arrived at UC Davis with interest in reducing pain and our excessive use of opioids,” Fishman said. “Over time, he went on to develop an experimental pharmaceutical that is a promising unique non-opioid drug for treating chronic pain that will enter human trials this fall.  With Hammock as a recipient, the NIH RIVER Program has declared its commitment to recognizing basic scientists who are developing profound solutions that address the opioid crisis.”

Harvard Medical School researcher and former physician, Dipak Panigraphy, said that “The pioneering studies from the Hammock laboratory not only have elucidated how certain environmental contaminants increase cancer risk, but our collaborative work shows promise for preventing metastasis and recurrence of cancer following surgical tumor resection and chemotherapy. These potentially paradigm shifting studies show that preoperative or peri-chemotherapeutic management of inflammation may stave off cancer recurrences.”

Said Hammock: “We would not have this without the scientific and intellectual input of Cindy McReynolds, program manager of the Superfund Program. Of course RIVER is a complement to the existing and past scientists who have worked on this project.”

The RIVER program is “the centerpiece of an emerging effort to support people, not projects, by providing support for much of an independent research program for outstanding investigators and giving them intellectual and administrative freedom, as well as sustained support, to pursue their research in novel directions in order to achieve greater impacts,” according to the NIEHS-RIVER website. “The RIVER program rewards outstanding environmental health sciences researchers who demonstrate a broad vision and potential for continuing their impactful research with increased scientific flexibility, stability in funding, and administrative efficiency.”

“Bruce Hammock and his research team are the perfect example of how UC Davis translates university research into societal impact,” said Dushyant Pathak, associate vice chancellor for Innovation and Technology Commercialization in the UC Davis Office of Research.

“As a result of their fundamental work in unraveling both insect and human regulatory biology, the Hammock laboratory elucidated a biochemical pathway that regulates inflammation, pain and senescence,” Pathak said. “Enabled by this knowledge, a novel drug candidate to treat chronic pain is expected to enter human phase 1a trials this fall--also supported by NIH. The drug is licensed by the university to EicOsis, a company that is directing its development and is a UC Davis spin-off.”

Hammock traces the history of his enzyme research to his studies in the Casida laboratory.  He was researching insect developmental biology and green insecticides when he and colleague Sarjeet Gill, now a distinguished professor at UC Riverside, discovered the target enzyme in mammals that regulates epoxy fatty acids.

“Basically, I began by trying to figure out how a key enzyme, epoxide hydrolase, degrades a caterpillar's juvenile hormone, leading to metamorphosis from the larval stage to the adult insect,” Hammock said. He asked himself these questions: “Does the enzyme occur in plants? Does it occur in mammals?" It does, and particularly as the soluble epoxide hydrolase in mammals.

"It is always important to realize that the most significant translational science we do in the university is fundamental science,” said Hammock, marveling that “this work to treat pain in companion animals, horses and humans all began by asking how caterpillars turn into butterflies.” 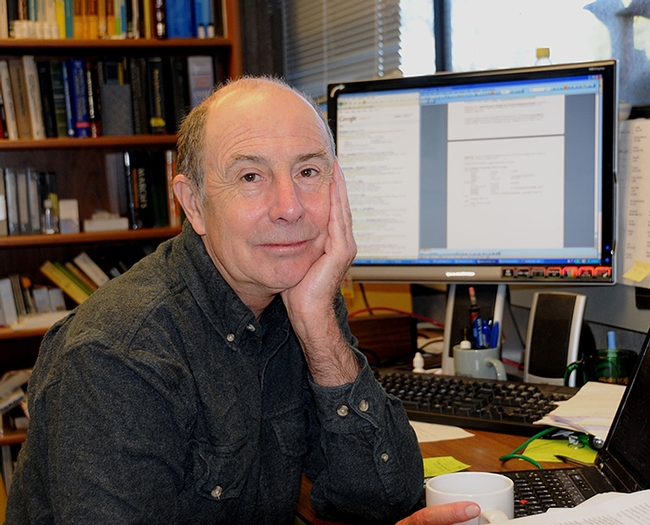