Bug Squad
sitenum=63
Happenings in the insect world
If You Were a Bug, What Would You Be? Scores of insect specimens from the Bohart Museum of Entomology, UC Davis, are showcased in the California State Fair's Insect Pavilion. (Photo by Kathy Keatley Garvey)
"If you were a bug, what would you be?"

That sign greets visitors to the California State Fair's Insect Pavilion. It's a good conservation starter.

The Insect Pavilion showcases insect specimens and insects from the Bohart Museum of Entomology at the University of California, Davis.

You'll see everything from a butterfly to a dragonfly, from a honey bee to a lady beetle (aka ladybug), and from an assassin bug to a praying mantis, not to mention grasshoppers, cockroaches, ants, and spiders (arachnids).

Families seem to love the butterflies the most, judging by the quality of their smiles and the quantity of cell phones and cameras pointed in that direction.

It's a mixture of reactions--from gleeful laughter to outright frowns to scientific excitement to quick walk-aways.

While you're at the fair, be sure to check out the honey bee display in Building B. (Actually, you could call it "Building Bee!" ) Mannequins donned in beekeeper suits (how sweet is that?) sport oversized honey bees on their shoulders.

Bees are a crucial part of the California State Fair and the state's history. The State Fair opened in 1854, a year after honey bees were introduced in California. Background: European colonists brought honey bees to what is now Virginia in 1622, but the insects didn't arrive in California until 1853. Beekeeper Christopher Shelton brought them to the San Jose area in March of 1853, according to a California historical landmark at the San Jose International Airport.

Interested in becoming a beekeeper? You can take beginning classes at the University of California, Davis, in August.

The California Master Beekeeper Program (CAMBP), directed by Extension apiculturist Elina Lastro Niño of the UC Davis Department of Entomology and Nematology, is hosting two short courses: one on “Planning Ahead for Your First Hives” on Saturday, Aug. 3 and the other, “ Working Your Colonies” on Sunday, Aug. 4 at the Harry H. Laidlaw Jr. Honey Bee Research Program.

Each will take place from 9 a.m. to 4 p.m. at the facility, which is located on Bee Biology Road, west of the central campus. The deadline to register is Thursday, Aug. 1. 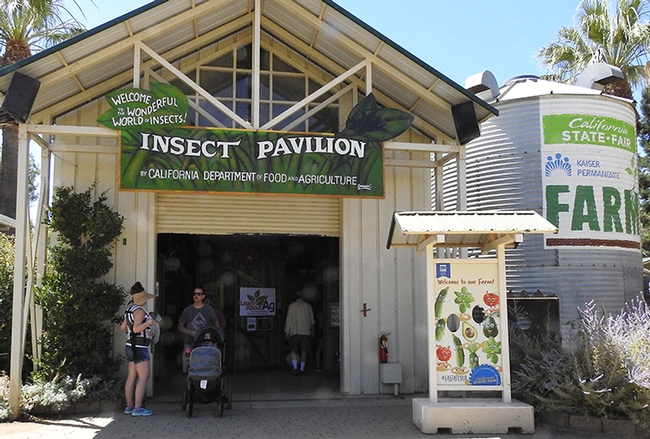 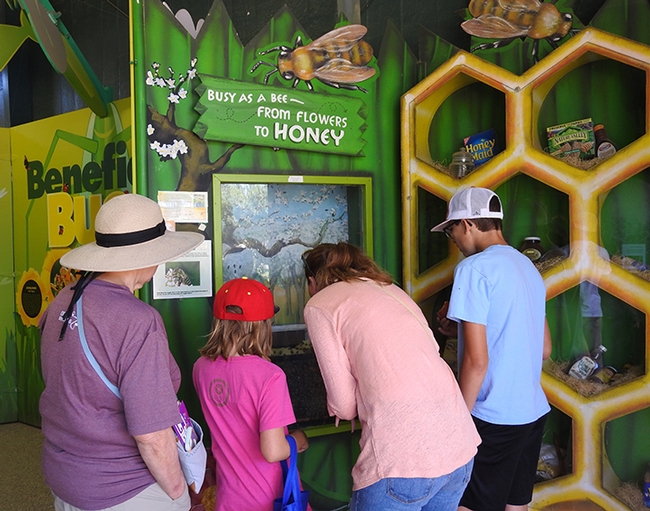 The bee observation hive is a popular attraction in the California State Fair's Insect Pavilion. (Photo by Kathy Keatley Garvey) 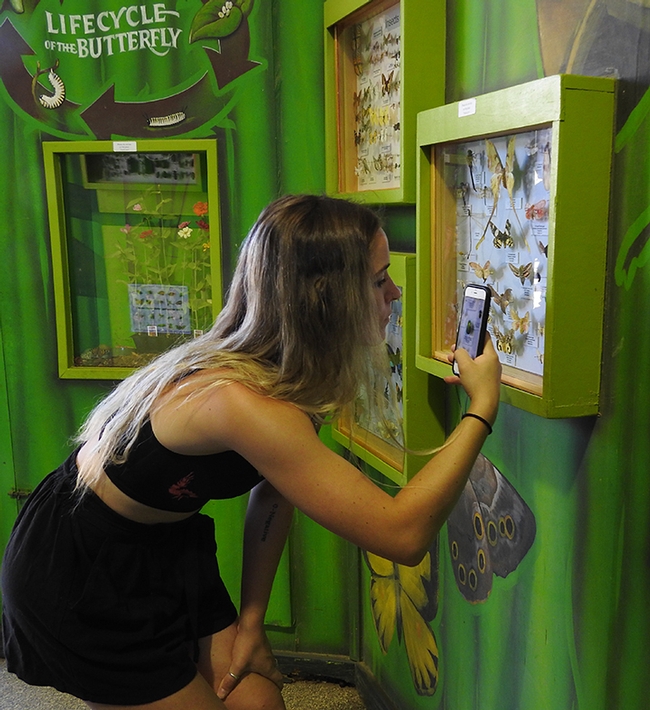 Future entomologist? A visitor to the California State Fair's Insect Pavilion captures an image of butterfly specimens on her cell phone. (Photo by Kathy Keatley Garvey) 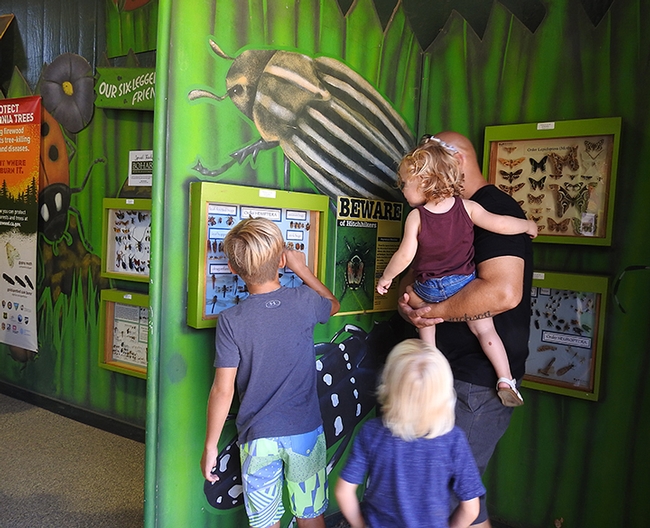 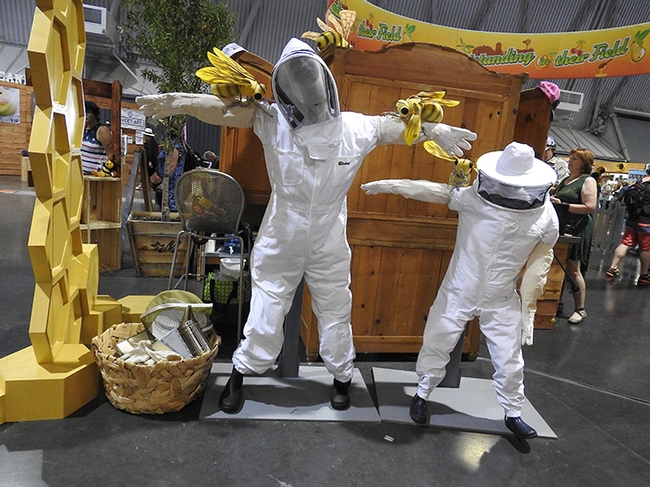 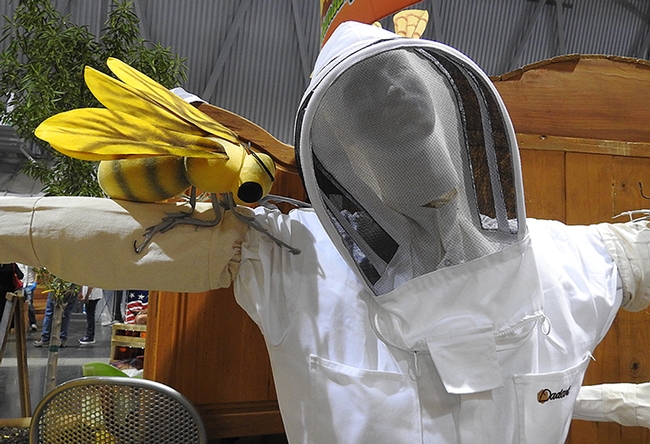 A gigantic honey bee on the arm of a beekeeper mannequin in Building B of the California State Fair. (Photo by Kathy Keatley Garvey)
Focus Areas:
Focus Area Tags: Agriculture, Economic Development, Environment, Family, Food, Health, Innovation, Natural Resources, Pest Management, Yard & Garden
Tags: beekeeping classes (4), Bohart Museum of Entomology (421), California Master Beekeeper Program (10), California State Fair (7), honey bees (367), UC Davis Department of Entomology and Nematology (416)
Comments: 2
Comments:
by Florence Nishida
on July 23, 2019 at 6:47 PM
If I were a bug, I'd be the predator bug of the Bagrada bug and the treehopper. We need something effective to take those down.
by Jill
on July 27, 2019 at 11:55 PM
Well, for our 4th of July Parade in Napa, I was a bee of the honey variety. I bopped kids' heads while going through the parade route. Previously, I was a brown marmorated stink bug during the parade.
Leave a Reply: