How ants can be “good” in ag production systems

Ants are often underappreciated in the United States for their natural benefits to agriculture. Organized as predatory superorganisms, ants often play an important role in pest management. Further, their influence extends beyond their pest control abilities; many ants live in soil and play a crucial role in maintaining soil fertility. Although recognized for their aphid-protecting tendencies and thus disliked by many growers, many traits of ants make them not only beneficial insects in agricultural settings but possibly a significant solution for sustainable food production moving forward.

The ability of ants to suppress pest species in an efficient way has been known since the year 300 A.D., and farmers continue to conserve and promote ant populations in agricultural systems in many regions of the world (Drummond & Choate 2011). They eat the larvae and eggs of pests and also disturb them during feeding and oviposition (e.g. López & Potter 2000). Weaver ants Oecophylla spp. (which live throughout Asia and Australia) are arguably the most well-documented ant genus used in biological control, but similar effects may occur in ants worldwide. Weaver ants share beneficial traits with nearly 13,000 other ant species and are unlikely to be unique in their properties as control agents (Offenberg 2015). For example, all ants can store protein in the form of trophic eggs and brood that can be cannibalized (Nonacs 1991), making their colonies stable and predictable service. Similar social and morphological traits in other ant species suggest great potential for the use of native California ants in the control of arthropod pests, weeds, and plant diseases in orchards and arable crops.

In addition to pest control, ants are important soil agents in agricultural systems because they contribute to aeration and fertilization, leading to higher soil quality. Aeration is the creation of pockets of air in soil, which help nutrients, water, and fertilizers seep into the soil and reach a greater extent of root systems throughout an agricultural plot. Ants aid in this process by digging a labyrinth of tunnels within the soil. Furthermore, ants introduce outside nutrients (e.g. seeds and insects) to the aerated soil through their foraging; food sources brought into the nest by worker ants decay and fertilize the surrounding plants, especially in no-till plots (Lange et al. 2008). For example, one field experiment showed that ants and termites increase wheat yield by 36% from increased soil water infiltration due to their tunnels and improved soil nitrogen (Evans et al. 2011). This result suggests that ants and termites have similar functional roles to earthworms (often regarded as the most important agents of soil turnover in many regions of the world). Additionally, they may provide valuable ecosystem services in dryland agriculture, which will become increasingly crucial for agricultural sustainability in arid climates, as is the case in some parts of California (Evans et al. 2011).

The presence of ants alone can be beneficial for growers; ants have been suggested as effective bioindicators of soil quality, especially in low-income areas that do not have access to expensive soil monitoring equipment (De Bruyn 1999). Growers are being pressured to rectify the issues of land degradation by reforming their management techniques; however, there are few tools to monitor soil health that can reliably inform farmers of the wholistic state of their soil. If ants could be further investigated as accurate bioindicators, they would be valuable tools for use in agricultural practices worldwide.

Through changes in management practices such as tillage and other manipulations of vegetation and crop structure, beneficial ant populations can be conserved in a variety of agroecosystems. However, there is still much research to be done to determine the extent of agricultural services ants provide. Some ant species succeed in defending specific cropping systems, whereas others are damaging and yet others play dual roles. A future challenge is to determine positive and negative ant–crop pairs and to develop management practices that facilitate the positives and remove the negatives. Another possibility for research is to focus on the development of barriers that keep ants in soil and off of crops; this would allow them to carry out their soil services while not tending phloem-feeding insects. Additionally, there is a need for better documentation of ant biodiversity in agricultural soils in many regions of the world, including California. This data will allow for evaluation of ants as bioindicators of soil quality and predictions of the vulnerability of ant species under future changes in land use and climate. If we can better understand species patterns and the multitude of roles ants play in agricultural systems, they can be utilized for more sustainable food production in the future. 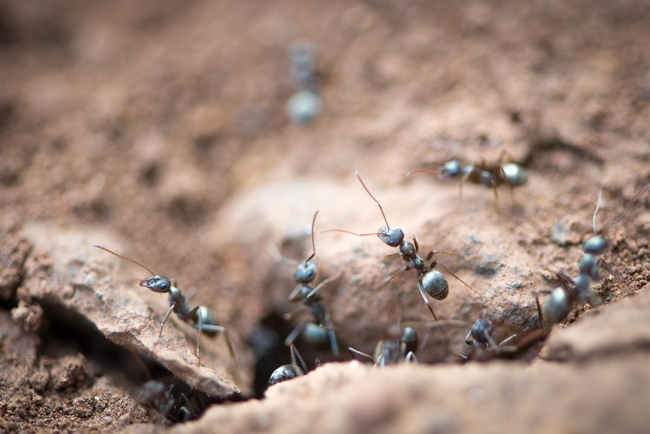 Tags: ants (7), biocontrol (18)
Comments: 2
Comments:
by Linda G Haque
on September 27, 2019 at 8:03 PM
Interesting article!
What species of CA native ants are common in backyards and farm areas in the county of San Luis Obispo and those south of SLO?
Are the various ant species in these counties fairly even in number, population-wise?
by Ben Faber
on September 30, 2019 at 10:23 AM
Not a complete answer, but here's some background on ants found in citrus orchards
http://ipm.ucanr.edu/PMG/C107/m107bpants.html
how to identify ants
http://ipm.ucanr.edu/PDF/PMG/antkey3303.pdf
and general ant biology and management
http://ipm.ucanr.edu/PMG/r107300211.html
and an overwhelming map distribution of world ants and those in California
https://antmaps.org/?
There are some more localized studies being done by Monique Rivera and Crew at UC Riverside, with results forthcoming
Login to leave a comment.