In this childhood photo, Elvira holds the hand of her mother, Lilia Galvan of Dixon. Elvira's siblings Virginia "Virgie" (center) and Sandra are in the background.
As a child growing up in Dixon, she remembers picking bell peppers and sorting tomatoes with her farmworker-parents and siblings. They also labored in fruit-cutting sheds in nearby Winters.

“I was the seventh of eight children,” related Elvira Galvan Hack, who was born in Arizona but moved to Dixon at age 4. “My mother stayed home with us during the school year, but in the summer, starting when I was in the fifth grade, I and all my siblings and my mom would work in the fields.”

“My parents, Eluterio and Lilia Galvan, made sure that we children grew up happy and healthy and in a loving home filled with family traditions,” Elvira said. “We were—and still are—a close-knit family.”

In high school, Elvira dreamed of a people-oriented profession that would enable her to help others, to make a difference. But her plans stalled; she became a single parent and a high school dropout who cleaned houses for a living.

Then it happened. Two of her house-cleaning clients, a University of California, Davis professor and his wife, saw her potential, her love of people, and her passion for learning. They encouraged her to finish high school and attend business college. She did. They loaned her funds for an electric typewriter to polish her skills. She did. She won a $200 scholarship to the business school, gained comprehensive training, and launched her career, first at a Woodland department store and then at UC Davis, where she has served as an academic advisor for undergraduate students for the past 17 years.

'Paying It Forward'
Today, as the beneficiary of a good deed never forgotten, the Dixon resident is “paying it forward” and “making a difference” as the staff academic advisor for students majoring in animal biology, a program housed within the UC Davis Department of Entomology and Nematology.

This year she's been singled out for not one--but two--awards for exemplary service: The Galvan family is close-knit. In front (from left) are Joaquin Galvan of Dixon, mother Lilia Galvan of Dixon, and Bonifacio Galvan of Sonora, known for the thriving company that he founded in his garage, Galvan Fly Reels. In the second row (from left) are Elvira Galvan Hack, Dixon; Sandra Galvan, Elmira, and Amanda Galvan, Dixon. In back (from left) are Lilia Felix, Washington state; Virginia "Virgie" Freitas, Vallejo; and Lydia Rodrigues, Arizona. Lilia and Lydia are twins.
Elvira Galvan Hack feels blessed. “I love my job and I feel honored to be able to pay it forward,” she said. “I was blessed with people who believed in me, encouraged me, and helped me accomplish my dream of continuing my education. I love my job, interacting with students as a staff academic advisor.”

Lauded as “going above and beyond” to advocate for and mentor her students, Elvira remains passionate about helping them succeed professionally, socially and developmentally. Her colleagues and peers praise her drive and determination to help others; her comprehensive training and dedication; her caring attitude; and her strong family ties and trust.

“Elvira is likely the best academic advisor ever,” said Kimsey, an adjunct professor and lecturer in the Davis Department of Entomology and Nematology. “Not only is she completely conversant with all the rules and regulations of the major, but understands the latitude of flexibility built into their application in a very human way. She is connected with all the administrative functionaries necessary to efficiently accomplish any task in a timely manner. For the confused or troubled student, she is the first and last resort for the solution of problems not only of an academic or administrative kind but those of a deeply personal nature as well. She keeps them on track, outlining their options, helping them decide on their future professions, and the direction their life should take.  She has been invaluable to me as the master advisor.  She really does care about a student's fate.  Moreover we have had great fun doing these tasks together.”

Her supervisor, chief administrative officer Nora Orozco, said that Elvira creates a welcoming environment in her office, meeting individually with her students to help them hurdle the many challenges they face. Elvira Galvan Hack was hired in October 2007 as the new undergraduate staff advisor for the animal biology major, then located in the Department of Nematology.  "In 2007 we never had an undergraduate major--only graduate programs, and Professor Ed Lewis (now with the University of Idaho) was the master advisor."

"In 2007 when I was hired, I was given the opportunity to start our undergraduate advising office from scratch," she  related. "I worked on putting procedures together for our new advising practices. I contacted each of our students and introduced myself, letting them know where their new advising office was located."  She compiled an electronic mailing list or ListServe to distribute messages to the subscribers. She engaged in "one-on-one advising with each student to get to know them and to gather information on how we as a department, and I as their advisor, could serve them better."

Hack held an open house in both the winter and spring quarters, where she presented information about the academic requirements; explained academic planning changes; and provided information on what classes they needed to take—and when—to enable them to complete their degree more efficiently and effectively.

'You Can Do This'
If they're feeling overwhelmed, she soothes them with: “If you are doing the best you can, you're doing great.” If they're feeling depressed, she will encourage them with “Look at everything you've accomplished! You can do this!”

“During my first quarter as a transfer student, I went through some extreme life changes and emotional rollercoasters,” one student said. “I would end up in her office crying my eyes out and in distraught, but she always calmed me down and helped me reach out for other help to get me through my rough patch.”

Another student described Elvira “as by far the most helpful, kind and encouraging adviser I have met at UC Davis. Being a first-generation college student, I require extra help in understanding and executing graduation requirements and other criteria for my future career goals.”

Her animal biology students know that her office is open. She is their dream catcher. She encourages them to meet their goals and guides them to realize their dreams. “I always makes time for my students,” she says. “I have an open door policy so I am accessible to students when they need it the most.”

One graduating student told her that her office was her “happy place”: “You always made me feel better. I felt like I could talk to you about anything. You took time to get to know me, my family, and we would laugh and talk about family. You understood.”

Elvira also understands food insecurities; she provides nutritious snacks for them in a corner of her office and provides a list of resources where they can get free or low-cost food.

Helping a Homeless Student
One memory stands out. “I had a student who revealed she was living in her friend's car in a grocery store parking lot because her new place to live wasn't ready yet I offered her help in finding a place to stay but she declined. I invited her to sleep on my couch and she declined. Said her new apartment would be ready soon. Two nights later at 12:15 a.m., I received a call from her, very upset, and saying she was going to be arrested. The security guard saw that she was living in a car in the grocery store parking lot and threatened to have her arrested. I told her to tell him I was on my way and not to do anything until I got there. He gave her an hour to be gone or he would call the police. I got there, calmed her down, and we moved the car. I told her to ‘grab what you will need because you're coming home with me.' She stayed and slept on my couch for four days until she could move to her apartment.”

In many respects, Elvira considers her students part of her own family, which includes three daughters, Jennifer Torres and Elaine Hack of Woodland, and Sierra Hack of Vacaville; and four grandchildren, Amaya, Alyssia and Aryanna Torres of Woodland and Aaden Matthew Brazelton of Vacaville.

The close-knit family includes Elvira's siblings, Joaquin Galvan of Dixon; twins Lydia Rodrigues of Tucson, Ariz., and Lilia Felix of Silverdale, Wash.; Bonifacio Galvan of Sonora (He started his now-thriving company, Galvan Fly Reels, http://galvanflyreels.com) in his garage; Virginia "Virgie" Freitas of Vallejo;  Sandra Galvan of Elmira; and Amanda Galvan of Dixon. "We are all 18 to 24 months apart," Elvira said.

Her oldest daughter, Jennifer, works in the UC Davis Department of Electrical and Computer Engineering. An older brother, Joaquin, recently retired from UC Davis as a retention coordinator with the Student Academic Success Center.

Blazing Her Own Path
Elvira not only followed in Joaquin's footsteps, but is blazing her own path. As a certified academic advisor, she manages, with faculty, the Science and Society Program; manages the Career Discovery Group, part of Science and Society; and works closely with the dean's office as an advisor in the contemporary leadership minor.

Highly trained in customer service, mental health, diversity and inclusion, social justice and other issues, Hack keeps current with policies and procedures by participating in workshops, classes and other projects. She is active in scores of campus committees. She served on the campuswide Undergraduate Academic Advising Counsel, which supports academic advising at UC Davis and provides advising recommendations to the Office of Academic Advising, the Vice Provost and Dean for Undergraduate Education, Division of Student Affairs and the Council of Associate Deans.

In addition, Elvira serves as a member of the First-Year Work Group, collaborating with CA&ES advisors to design workshops to better serve first-year students.

“I love my job,” Elvira says.  “I am blessed. I am living my dream of paying it forward and making a difference.” 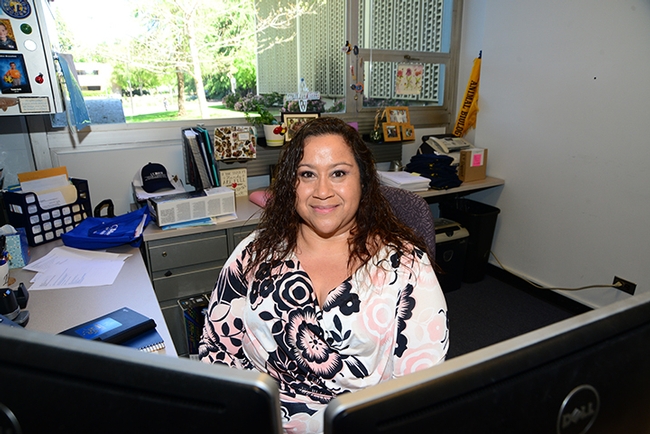 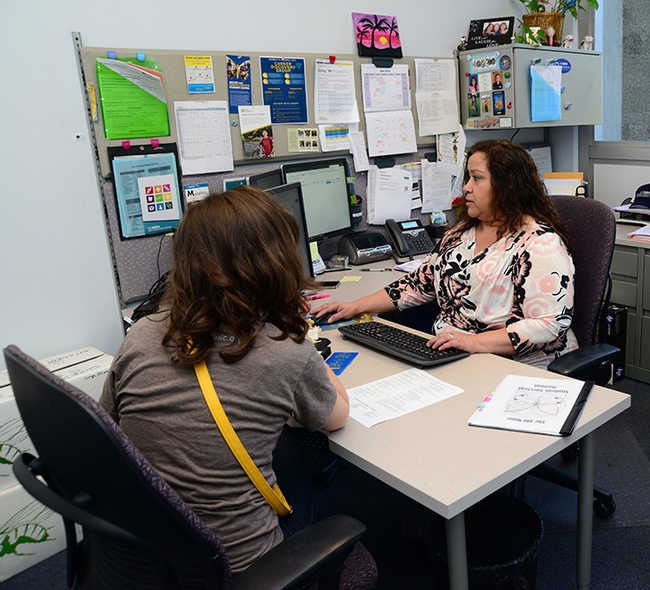 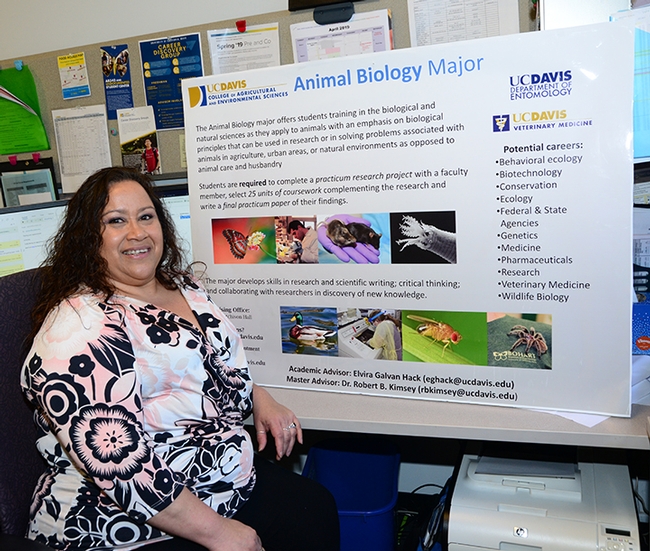 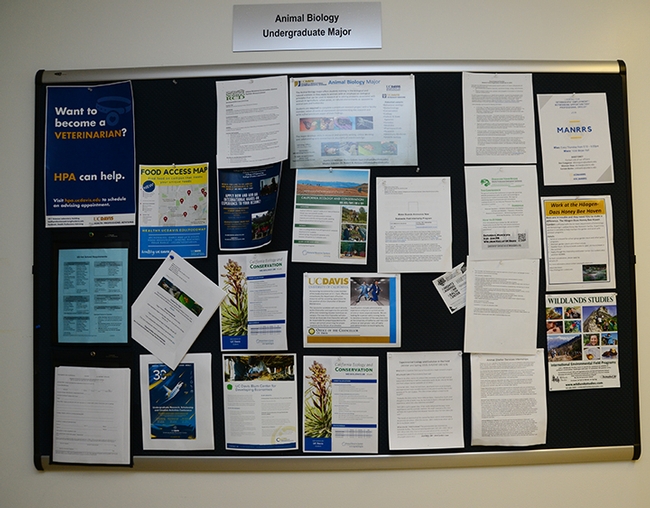 The bulletin board outside Elvira Galvan Hack's office in Hutchison Hall is a magnet for students. (Photo by Kathy Keatley Garvey) 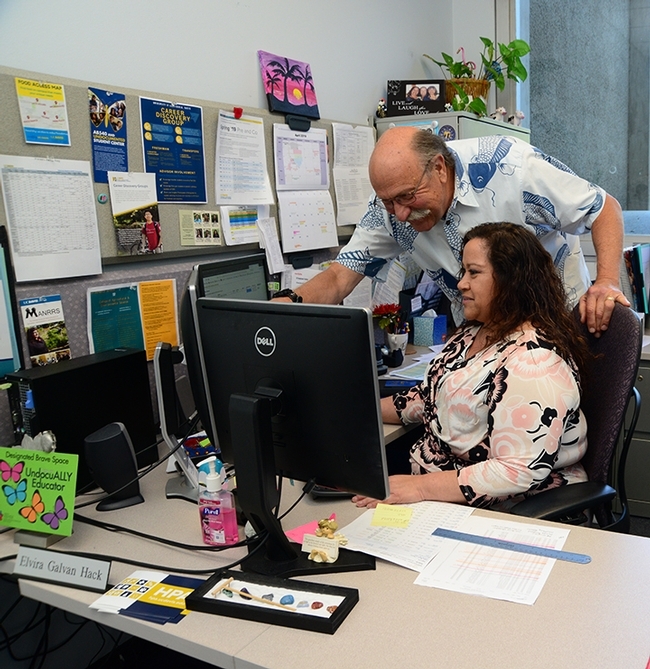