My wife and I just returned from a summer drive – of 4,500 miles, I might add – to and around western Canada.  We usually go much farther afield – like Borneo – and then it is all too obvious how great the differences are from home.  Everything is a stretch; Weather, clothing, local transportation, food, germs, etc., etc.  From an adjustment point of view, Canada is a snap.  From the friendly wave at the customs crossing the challenges of daily life were going to be familiar.  But when I travel, I like the differences.

So noticing small differences became the center of my experience.   For instance, I had the opportunity to lake fish in Jasper, Alberta.  Ordinarily, this would be easy and routine.  I was told to be prepared with clothing for all seasons.  So I had a few layers.  I should have known something different was happening when the guide said he thought I was going to be cold.  Well, I said with over-confidence, I'll be ok and besides this is all I have with me.  We started on the lake under a blue sky and it was chilly but the sky was clear and I was hopeful.   It warmed up and was quite toasty by mid-morning.  It began to get breezy by late morning, but not to worry – some puffy clouds but warm and sunny still.  The guide said that it was getting cloudier and could rain!  But there were no rain clouds at that moment.  They come up fast, he warned, and sure enough, they did.  By late morning it was dark and I was getting colder.   The guide said that this shift in the sky fooled guest fishermen.  By mid-day, it began to rain, and rain, and rain.  Windy, needles-on-the-cheeks rain.  Did I want to stop and get off the water since the ride back was into the wind and would take a while?  It would probably stop raining soon but it would be cool for some time.  OK, I agreed with resignation, and back we motored and sure enough, it was clear by the time we got to shore though I did notice that we were the only boat left on the lake.  And it was very chilly.  When we got back to the fly shop and I met my wife, I was surprised to find out that it hadn't rained in the town! Only on the water.  I was taken aback.

And so it went.  I obeyed speed signs about nearby towns only to discover that the town had 5 buildings and 3 were boarded up and the other 2 were falling apart.  Food with names I recognized– like spaghetti – wasn't quite what I expected.   Motels were slightly unfamiliarly laid out.  The differences were invariably not shocking and in the normal course of events, I would have adjusted to them without notice.  But it all added up to being in a foreign country,

Sometimes, the difference was subtly different in a softer direction. One of the most common garden flowers in our area in California is petunias.  Seeing them in Canada was a comforting parallel.  However, there were several towns that added to street décor wonderful hanging baskets with petunias of several colors.  They were large, sometimes several to a block and were obviously taken care of by either business owners or homeowners.  They were glorious.  Many roadside slopes of wildflowers – very purple and distinct.  Town spaces were well decorated for the most part.

So the challenge of the trip was being open to small differences – a lot of familiarity and real differences which made the experience fresh and enjoyable.  Traveling nearby can be fun too. 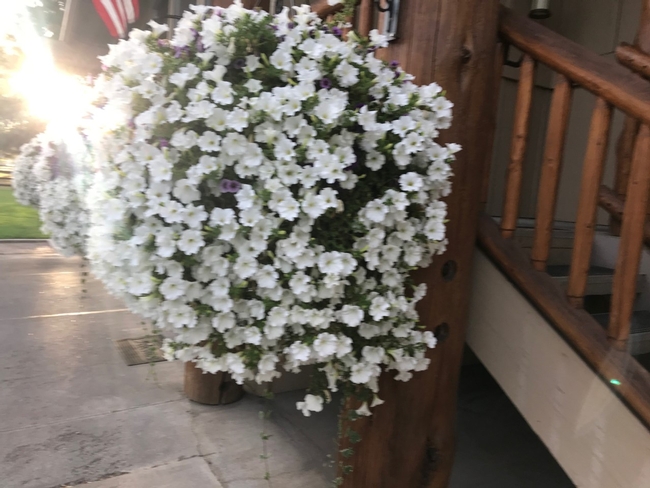