A team of University of Connecticut researchers engineered a soil moisture sensor that is more cost effective than anything currently available and responds to the global need to regulate water consumption in agriculture. https://today.uconn.edu/2019/09/engineers-produce-water-saving-crop-irrigation-sensor/

Designed and tested on the university's farm, the sensors are small enough to insert into the soil with ease and less expensive to manufacture than current technology, the researchers write in the Journal of Sensors and Actuators.

“Advances in hydrological science are hampered by the lack of on site soil moisture data,” said Guiling Wang, study author and professor of civil and environmental engineering at UConn. “It's really hard to monitor and measure things underground. The challenge is that the existing sensors are very expensive and the installation process is very labor intensive.”

The sensors developed by the team of UConn engineers — environmental, mechanical, and chemical — are expected to save nearly 35% of water consumption and cost far less than what exists. Current sensors that are used in a similar way range from $100 to $1,000 each, while the one developed at UConn cost $2, according to the researchers.

An alternate monitoring option, soil moisture data collected from remote sensing technology such as radars and radiometers on board satellites, have suffered from low resolution. But the new technology developed by UConn Professor Baikun Li's group can provide high spatio-temporal resolution data needed for hydrology model development in Wang's group.

In the UConn prototype, wires are connected from the sensors to an instrument that logs data. Researchers conducted field tests of the sensors — performing side-by-side tests with commercial sensors under various environmental conditions throughout a 10-month period. The effects of the environmental variations on soil moisture throughout the period were clearly reflected.

Critically, the small sensors can also be easily sent around he world given the fact that soil moisture plays a fundamental role in agricultural decision-making globally.

Accurate soil moisture sensing is essential to ensure a water level that produces the most robust crops while not wasting the natural resource. In some states in the U.S. — Florida and California, for example — irrigation water usage has become tightly restricted.

The UConn researchers are also working on a nitrogen sensor that is the same model of the water sensors. These would help provide farmers with information on when fields need fertilizing. Currently, nitrogen sensors are not available using this type of technology.

“This is really an exciting start to a much larger scope of things we have in mind,” says Li, a study author and professor of civil and environmental engineering.

This study examined flat thin mm-sized soil moisture sensors (MSMS) fabricated using thermal press technology on thin compact disc (CD) to solve the long-standing problems of soil moisture profiling. The 10-month field tests conducted at a farm site compared three groups of MSMS with commercial capacitance-type soil moisture sensors (SMS) in terms of accuracy, sensitivity to environmental variations (e.g. water shock, temperatures, dry/wet seasons) and long-term stability. MSMS sensors were mounted on the shallow, middle and deep locations of a hollow plastic rod (length: 1.1 m) and installed along the soil depth to profile the soil moisture variation. The resistance readings of MSMS sensors along soil depth were recorded in a real-time mode. Due to soil settlement over time after installation, the MSMS sensors in the shallow soil suffered from unstable readings, while the MSMS sensors in the middle and deep soil exhibited high stability and had the best correlation with water content values of commercial sensors (R2 value: 0.6264). The contact between MSMS surface and soil particles appeared to be a critical factor determining the stability of MSMS readings. In addition, MSMS sensors showed a prompt response to the sharp change of soil moisture in the water shock tests. The soil moisture profiles collected from MSMS sensors captured the spatiotemporal variation of soil moisture, which enabled the simultaneous profiling at multiple locations. This field study demonstrated the great potential of mass deployment of low-cost but accurate MSMS sensors to achieve high resolution profiling for water-saving irrigation. 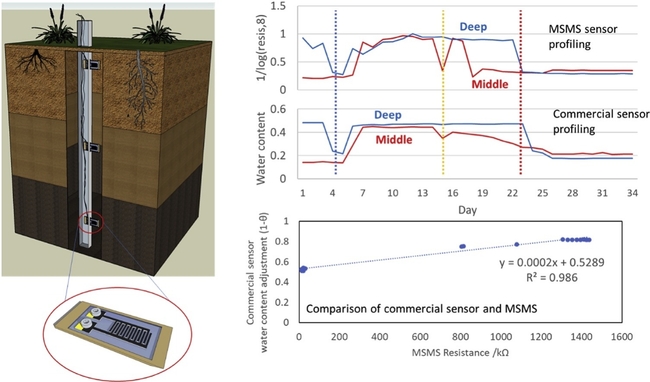