A new species of gigantic tumbleweed once predicted to go extinct is not only here to stay -- it's likely to expand its territory.

The species, Salsola ryanii, is significantly larger than either of its parent plants, which can grow up to 6 feet tall. A new study from UC Riverside supports the theory that the new tumbleweed grows more vigorously because it is a hybrid with doubled pairs of its parents' chromosomes.

Findings from the study are detailed in a new paper published in the Oxford University-produced journal AoB Plants.

"Salsola ryanii is a nasty species replacing other nasty species of tumbleweed in the U.S.," said study co-author Norman Ellstrand, UCR Distinguished Professor of Genetics. "It's healthier than earlier versions, and now we know why."

Humans are diploid organisms, with one set of chromosomes donated by the mother and one set from the father. Sometimes a mother's egg contains two sets of chromosomes rather than just the one she is meant to pass on. If this egg is fertilized, the offspring would be triploid, with three sets of chromosomes. Most humans do not survive this.

Plants with parents closely related enough to mate can produce triploid offspring that survive but are unable to reproduce themselves. However, a hybrid plant that manages to get two copies from the mother and two from the father will be fertile. Some species can have more than four sets of chromosomes. They can even have "hexaploidy," with six sets of chromosomes.

Scientists have long assumed there must be some kind of evolutionary advantage to polyploidy, the term for hybrids that have multiple sets of chromosomes, since it poses some immediate difficulties for the new hybrids.

"Typically, when something is new, and it's the only one of its kind, that's a disadvantage. There's nobody exactly like you to mate with," said study co-author Shana Welles, the graduate student in Ellstrand's laboratory that conducted the study as part of her Ph.D. research. She is now a postdoctoral fellow at Chapman University.

The advantage to having multiple sets of chromosomes, according to the study, is that the hybrid plant grows more vigorously than either of its parents. This has been suggested as the reason polyploidy is so common in plants. However, it has not, until now, been demonstrated experimentally.

Polyploidy is associated with our favorite crops; domesticated peanuts have four sets of chromosomes, and the wheat we eat has six.

Though tumbleweeds are often seen as symbols of America's old West, they are also invasive plants that cause traffic accidents, damage agricultural operations, and cause millions in property damage every year. Last year, the desert town of Victorville, California, was buried in them, piling up to the second story of some homes.

Currently, Salsola ryanii has a relatively small but expanding geographic range. Since the new study determined it is even more vigorous than its progenitors, which are invasive in 48 states, Welles said it is likely to continue to expand its range. Additionally, Welles said climate change could increase its territory takeover.

Though this tumbleweed is an annual, it tends to grow on the later side of winter.

"It's one of the only things that's still green in late summer," Welles said. "They may be well positioned to take advantage of summer rains if climate changes make those more prevalent."

Given its potential for damage, the knowledge now available about Salsola ryanii could be important for helping to suppress it, and Ellstrand believes that is what should happen before it takes over.

"An ounce of prevention is a pound of cure," he said. 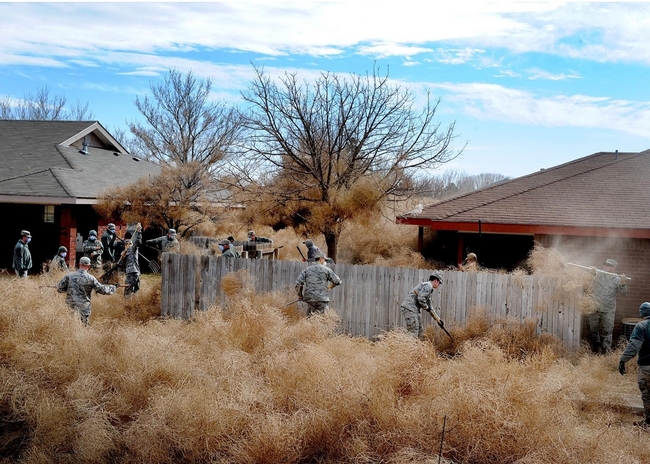