Home gardening has 'arrived'
Published on: August 19, 2010
This week, the Philadelphia Inquirer resurrected the term "homesteading," defining it for the 21st century as a trend toward keeping bees and raising chickens, gardening and canning.


UC Cooperative Extension county director Rose Hayden-Smith told reporter Virginia A. Smith that the creation of an organic vegetable garden on the White House lawn signifies the movement's arrival in the popular consciousness.

"People in national leadership are talking about these issues," Smith was quoted in the story. "I think this is going to be a very enduring feature of American cultural life."

Indicators cited in the article of the "homesteading" trend:

Another sign, closer to home, is the collaborative development of a garden in Modesto aimed at providing a diversity of pollen for native pollinators, reported the Modesto Bee.

Xerces Society for Invertebrate Conservation, based in Portland, Ore., hopes to enhance bee health with the Modesto garden and 10 others across the nation, which were funded with a grant of about $330,000 from the federal Natural Resources Conservation Service. The demonstration area is at the Stanislaus County Agricultural Center off Crows Landing Road - the same location that houses the UC Cooperative Extension office.

After the soil is solarized this summer to kill weed seeds and plant pathogens, the garden will be planted with poppy, lupine, phacelia, aster, milkweed, sunflower, salvia, buckwheat, ceanothus, manzanita and other plants. Most are California natives.
The article said the garden project is getting help from the East Stanislaus Resource Conservation District and UCCE. 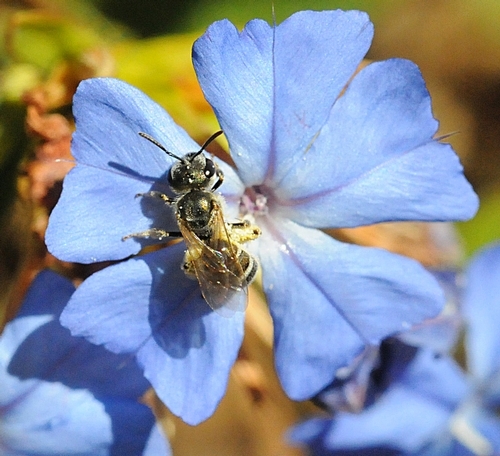