Any chicken can shed salmonella
Published on: September 7, 2010

Experts quoted in a Los Angeles Times story published yesterday agreed that salmonella contamination can happen in any egg production system - large operations, small family farms or in the backyard. Chickens infected with salmonella shed the pathogen in their feces, which can contaminate the egg shell. In rare instances, salmonella infects a hen's ovaries and can end up inside the eggs she lays, the article said.

A Texas A&M University professor said eggs from large-scale producers should, theoretically, be safer because they are subject to state and federal regulations requiring inspections and regular testing for pathogens, including salmonella.

A Louisiana State University professor said the cages on commercial farms have slanted bottoms so eggs roll out right after they're laid, making it less likely they will come in contact with hen droppings.

Michele Jay-Russell, food safety specialist at the Western Institute for Food Safety and Security at UC Davis, told reporter Elena Conis when a foodborne illness breaks out in a large commercial concern, the problem becomes a huge, national problem very quickly. But that doesn't mean smaller-scale production is safer.

The article cited two studies comparing the occurrence of salmonella in free-range and conventionally produced eggs: 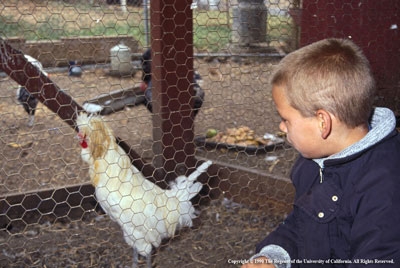