Technology developed by UC Davis animal scientist James Murray that could significantly reduce human suffering and death from diarrhea has found a home in Brazil.

Goats genetically altered to produce milk that prevents diarrhea have been in development in Murray's Davis lab for decades, according to an article in Technology Review. However, sensitivity to the idea of bioengineered animals in the United States has severely limited research funding. Currently the project is supported with a three-year, $400,000 USDA grant to assess the risks of transgenic animals.

"The only money available is to look at environmental safety. It's a backwards way of funding the research," Murray is quoted in the article. "We haven't gotten enough to move the research forward; we are four or five years behind where we should be."

In Brazil, where diarrhea is the fifth or sixth most common killer of children under five, the government has pledged $3.5 million to establish a herd of transgenic goats and initiate human trials on their milk.

"I think it's brilliant," Murray was quoted. "We want to see it used. We don't care which country does it."

The goats in Murray's lab were engineered to express large amounts of human lysozyme, a protein found in human milk, tears and saliva that destroys the cell walls of bacteria. Drinking the milk would inhibit establishment of the diarrhea organism.

The milk from transgenic goats could enter human trials in elementary school children within two years, the article said. If it proves effective, the Brazilian researchers hope they can powder the milk and export it other countries where many children are afflicted with diarrhea. 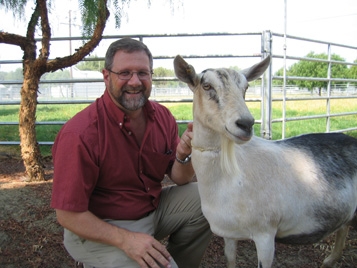