Palm tree growers, government officials and UC scientists are moving quickly to prevent the spread of red palm weevil, which made its first U.S. appearance a month ago in Laguna Beach, according to an article in the Riverside Press-Enterprise. The pest has caused enormous damage to palm trees in other parts of the world. Its larvae excavate large holes in the trunks of many types of palms - including coconut, date and oil palms, canary, queen and fan palms - killing a mature tree in about a year.

"This is central to our livelihood," the story quoted Albert Keck, chair of the California Date Commission and a third-generation date farmer.

"Palms are iconic to California," Keck was quoted.

Originally from Southeast Asia, the red palm weevil has spread to Africa and Europe, reaching the Mediterranean in the 1980s. It was first recorded in Spain in 1994.

"These can travel great distances because they live with their food supply," Hoddle said.

A UC Riverside news release said scientists, growers and regulators will gather at 2 p.m., Friday, Oct. 29, at UC Riverside to discuss a collaborative effort to manage red palm weevil and a campaign to alert and educate Southern California homeowners about the threat.

Detailed information about red palm weevil is on the UC Center for Invasive Species Research website. 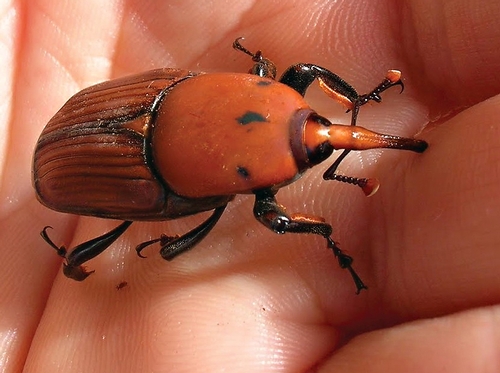