Scientists perplexed by verticillium wilt in lettuce
Published on: October 29, 2010

UC scientists in the Salinas Valley are trying to figure out why certain varieties of lettuce became susceptible in the 1990s to the fungus that causes verticillium wilt and how the fungus is getting into the soil.

"This is one of the more important diseases facing growers in the county," the Salinas Californian quoted UC Cooperative Extension farm advisor Steve Koike. "It has a significant impact and is increasing each year."

Strawberry crops have long suffered from the disease, but lettuce was immune. Strawberry fields are often fumigated to kill fungi, other soil-borne pests and weed seeds, however, the value of the lettuce crop doesn't justify fumigation and methyl bromide, the primary fumigant, is being phased out.

Lettuce farmers must look for other ways to manage fungus-contaminated fields, Koike told reporter Melissae Fellet. Growers can plant crops immune to the fungus, such as broccoli, cauliflower or celery, or they can plant fungus-resistant lettuce varieties.

The scientists, initially mystified about the source of the fungus, recently discovered that spinach seeds from Denmark, Holland, New Zealand and Washington state have been carrying the fungus into Salinas Valley fields, where it persists in the soil for years.

USDA awarded the researchers a $1.5 million grant to investigate how the fungus is transferred from the seeds to lettuce. UC Davis plant pathologist Krishna Subbarao, who is headquartered at the USDA research station in Salinas, is the principal investigator. 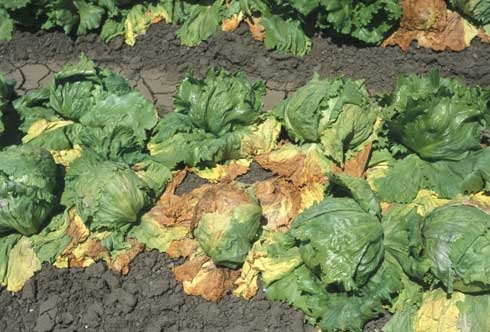