Transgenic goats cause a stir
Published on: April 29, 2008

Not surprisingly, a story in yesterday's Sacramento Bee about goats that have been genetically modified with human genes is generating comments on the newspaper's Web site.

The story was prompted by a UC Davis news service press release by Pat Bailey.

In short, UC Davis animal scientists James Murray and Elizabeth Maga engineered a small herd of dairy goats to produce high levels of a human antibiotic-like protein in their milk. Pigs fed milk from the transgenic goats had significantly lower levels of E. coli bacteria in their small intestines than those raised on regular goat's milk. The scientists feel the results mean the goat milk could one day be used to protect or cure people of diseases, especially in poor regions of the world.

Comments on the story ranged from outraged to indifferent to funny.

"Completely disturbing... on so many levels," said one.

"What's disturbing is the irrational fear," wrote another.

"It might be disturbing, but it sure explains a lot about my mother in law," commented a writer.

Those interested in learning the ins and outs of dairy goat production may wish to attend a workshop May 15 in Merced. UC Cooperative Extension farm advisor Deborah Giraud says the market for goat milk is growing due to increasing popularity of specialty goat milk cheese and yogurt. For all the details and registration information, click here. 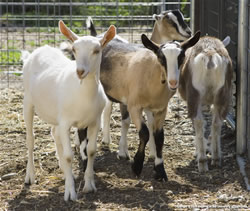